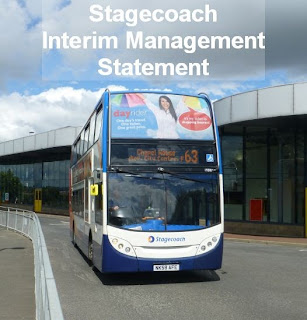 Stagecoach Group plc has today published the following interim management statement, covering available information for the period to the date of this announcement.

The overall profitability of the Group has remained satisfactory, and there has been no significant change to our expected adjusted earnings per share for the year ending 30 April 2014.

Our UK Bus (regional operations) division has performed strongly during the period. Passenger volumes have increased year-on-year, which we believe is partly attributable to better weather.  Strongest growth continues to be achieved in our commercial revenue, with concessionary, tendered and school revenue growing at a lower rate.

Our UK Bus (London) division has continued to perform well, as we remain focused on keeping tight control of costs to ensure we can compete effectively for contracts.  The small reduction in revenue during the period is in line with our expectations, and is anticipated to reverse in the second half of the financial year as we begin to benefit from the nine new contracts won last financial year.

The financial performance of our rail businesses is in line with our expectations. As we expected, revenue growth rates since 21 July 2013 have fallen, partly reflecting the incremental revenue during the period of the London 2012 Olympic and Paralympic Games.


We continue to discuss with the Department for Transport (DfT) the planned extensions to our South Western Trains and East Midlands Trains franchises.  We also continue to progress our bids for the Thameslink and Docklands Light Railway franchises, and the announcements of the winning bidders for those franchises are expected in Spring 2014.

Megabus.com in North America is the fastest-growing part of the Group, increasing revenue by 21.8% in the three months ended 31 July 2013.  This reflects further growth in existing services, as well as contributions from our Texas and California networks launched during 2012/13.  Overall, the North American business remains on track to deliver a significant step up in its operating profit in 2013/14 when compared to 2012/13.

Virgin Rail Group (VRG) continues to earn a fee equivalent to 1% of revenue with the DfT taking the risk that revenue and/or costs differ from those expected.  VRG and the DfT are discussing revised commercial terms that could see VRG take greater revenue and cost risk for the period from a date to be agreed through to April 2017 for a commensurate financial return.

Overall current trading is good and the prospects for the Group remain positive.