The local Derbyshire media has reported that a row has broken out between rival bus companies in Heanor after one accused the other of using underhand tactics to claim customers.
Managing director of trent barton Jeff Counsell has questioned why competitor YourBus, based less than a mile away, has begun accepting his firm’s Zig Zag tickets on its services.
The £5 tickets entitle holders to a day’s unlimited travel on trent barton buses, which operate across Derbyshire and Nottinghamshire.
Now Mr Counsell believes YourBus’s tactic can only be damaging to both firms.
He said: “We totally accept competition as it’s a free market- and we welcome good competition as it grows the market place.
“But this doesn’t - and when they start accepting our day tickets we have to wonder what this is about.”
The move by YourBus comes weeks after it launched the Y1 service, which stops at Market Place in Heanor and runs through Smalley towards Derby - a similar the route to trent barton’s H1. 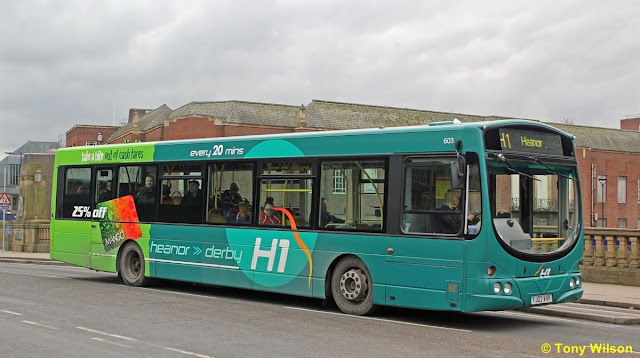 It also arrives in Heanor five minutes earlier than the trent barton bus.
Mr Counsell believes the tactics are a clear attempt muscle in on the same customer base.
He continued: “The way they have registered the service in front of our established services and by accepting out tickets for travel - it seems to us this is just a blatant attempt to take our customers and is actually not broadening the market at all.”
He continued: “At the moment my customers are getting a better deal, but surely YourBus can’t continue to accept tickets and not get any revenue from it.
“As they are they won’t be making any money, so they can’t survive.
“All that will happen is we will split the customers.”
This week managing director of YourBus Scott Dunn justified the firm’s tactics, saying the bus war is good news for passengers.
He said: “There has been very little or no competition on certain bus routes around the area.
“We believe the market needed quality competition and over the last four years we have introduced routes offering quality vehicles and drivers, whilst offering good value fares.
“This can only be good for the passengers and the community.”
Mr Counsell said that trent barton has already reacted to the heightened competition.
Earlier in the month it dished out free coffee and croissants to its morning passengers and is beginning to offer its regular customers a seven day travel package for 20p,
From September 8 the buses will run more frequently through the day at 15, rather than 20 minute intervals.
He said: “What we are doing is going that extra mile with our customers - we pride ourselves on great customer service.”
YourBus, based at Heanor Gate Industrial Estate launched in 2009. The Trent bus company, which merged with Barton Transport Ltd in 1989, is celebrating it’s centenary year this year.