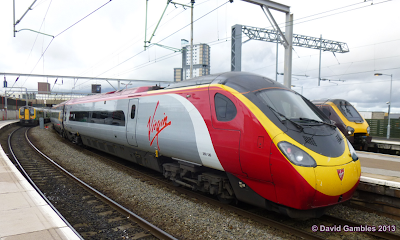 A new application to operate direct services from London to Blackpool and Shrewsbury on the West Coast Main Line has been submitted by Virgin Trains.
Plans for a twice-daily service were rejected for a second time in July.
Network Rail had said the line could not cope with extra traffic, but the train operator said improvements to infrastructure would now allow the routes to go ahead.
It added that it hoped the services would be operational by May next year.
In rejecting the previous application, the Office of Rail Regulation (ORR) said the question of new services to the towns needed to be "looked at again as soon as possible" once performance improvements were made by Network Rail.
In June, Network Rail announced a £40m investment programme to improve the West Coast line after it was criticised over train delays due to track faults and problems with overhead cables.

The company's production director Phil Bearpark said Blackpool and Shrewsbury "have been absolutely clear about their desire to have a direct train link with London".
"We have continued to work with Network Rail to ensure that they improve performance [and] it is now down to them to ensure they honour their commitments on this and for the ORR to hold them to account," he added.