£5m for Emission Clean Up


The funding we are providing will help clean up emissions from older buses in some of our most polluted urban areas, with all the health benefits that brings.
This will lead to real improvements in air quality on some of our most polluted streets, as well as helping to stimulate jobs and growth in the bus and environmental technology industries. I look forward to seeing how these initiatives are taken forward, and to the delivery of real results very soon. I hope that other parts of the country will adopt similar measures in the near future.

Improving air quality is important for the coalition government, as is economic growth. This scheme will benefit the environment as well as helping create and sustain jobs in British companies, allowing them to develop and market new clean technologies here and abroad.


This funding boost will bring real improvements to air quality around the country which is good news for the environment and our health.

I am keen to embrace new technology and encourage local authorities to share their experience so that others can follow suit.


DfT has already provided £5 million of funding, match-funded by the Mayor, to fit 900 London buses with exhaust after-treatment technology, which is already delivering significant reductions in pollution in the capital. The latest funding will allow local authorities in other parts of England to clean up their buses in similar ways, delivering similar benefits. 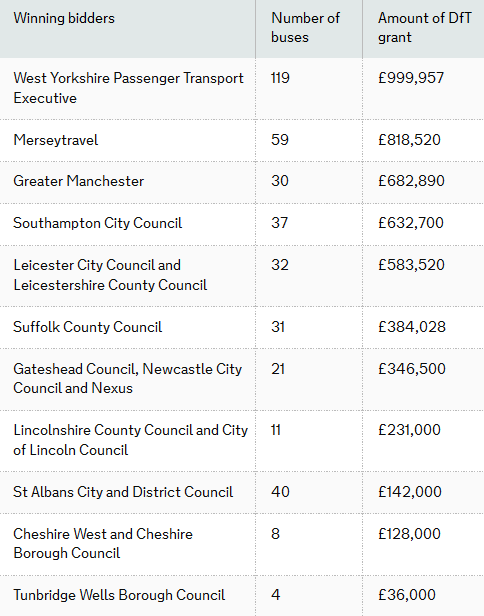 Winning schemes include a mix of proven technologies like Selective Catalytic Reduction and new technologies such as hybrid flywheel, which can deliver up to 20% fuel reduction and harmful emissions; gas engine replacement and other innovative modifications. Local and transport authorities are expected to work with the bus operators in taking their new projects forward and DfT will be following their progress.

As will be noted above that one of the successful bids is from Gateshead / Newcastle / Nexus, who have in the past made some efforts to improve air quality in their region. The most significant one being the acquisition of ten electrically powered Designline vehicles which were used initially on a five year contract operated by Stagecoach.
The buses proved highly unreliable however and after being tried on other less demanding routes have ended up languishing in a Newcastle scrap yard.

We have a new collection of pictures taken at the end of August showing the Designlines in the scrapyard. These will be published on this website within the next few days. Keep checking!