The annual Chesterfield bus running day is now apparently into its thirteenth year. Always a relatively small operation, the 2013 event was even smaller, due to a combination of a lack of drivers, along with a number of mechanical problems that beset vehicles planned for attendance. Obviously these were beyond the best laid plans and was something of a shame, especially as the organisers had put so much effort into making sure the intended services ran as smoothly as possible. 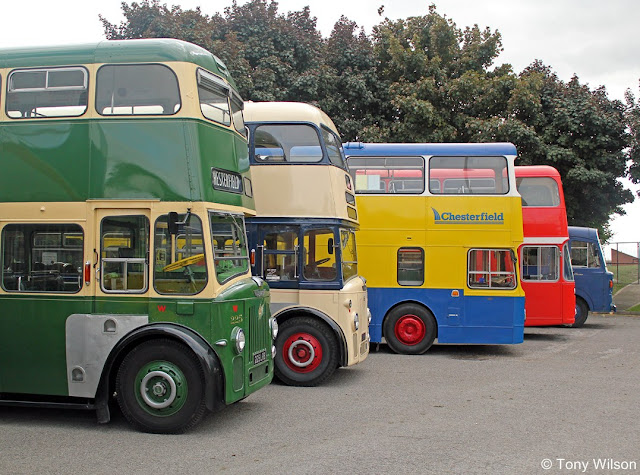 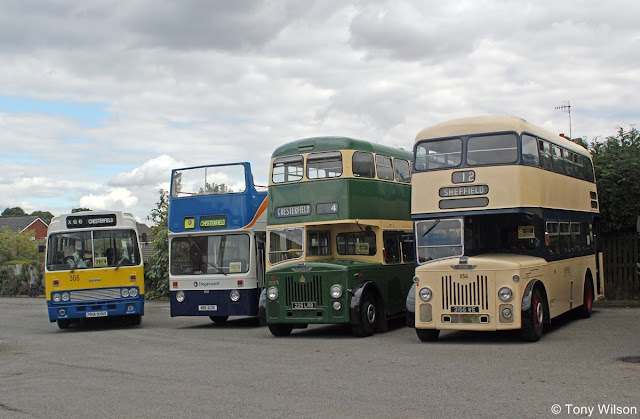 The hub of the operation was the bus stopping area at St. Mary's Catholic School on the Newbold side of the town and actually provided a splendid location, being as no members of the general public were inconvenienced by the predilections of us omnibological hobbyists!
However, that said whilst the numbers were down, the buses and routes operated were both varied and interesting. The routes operated to and from the Coach Station (traffic problems along Markham Road caused some other problems), the Railway Station, Baslow, Dronfield and Staveley. The run out to Baslow was particularly good being as it operated via Cutthorpe, Pratt Hall and Freebirch over some roads that rarely see buses let alone double-deckers these days. Before my time, but am reliably informed that the locations were pertinent as Chesterfield Transport in those halcyon days did operate out to Pratt Hall. 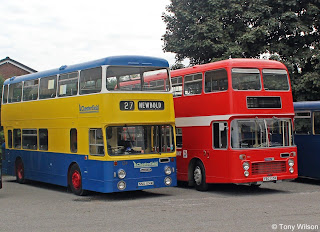 Vehicles in attendance were:- 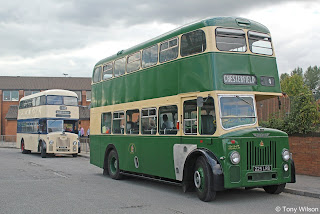 At the temporary 'bus station' Chesterfield and Sheffield respective corporations were in evidence in the shape of a couple of fine Leyland Titan PD2s. Both vehicles had bodywork by the former Leeds based Roe company. 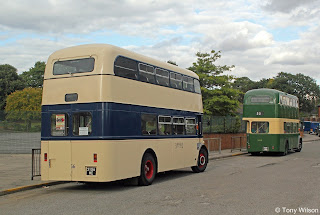 The rear aspects of buses are few and far between but on this occasion a photo opportunity arose with the two Leylands and made a fine comparison of a doored version as opposed to an open platform type. 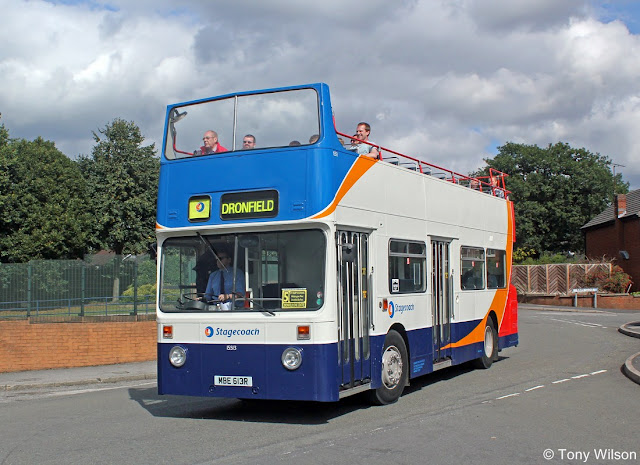 Of course nowadays much of both Chesterfield and Sheffield's transport infrastructure is in the hands of the Stagecoach empire. Roe bodied Daimler Fleetline 15513 made several journeys during the afternoon to and from Dronfield Civic Centre. Used for several years on the Grimsby Cleethorpes seasonal summer services, it has been a resident at Chesterfield now for some while. 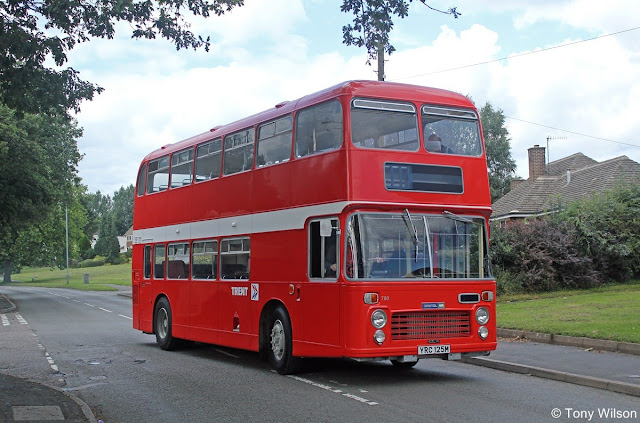 Representing the era of the National Bus Company was this handsome looking Bristol VR with bodywork from Eastern Coachworks. Restored to original NBC Trent livery 780  was last seen by the photographer some years ago down in the West Country operating for an independent company in the Truro area. 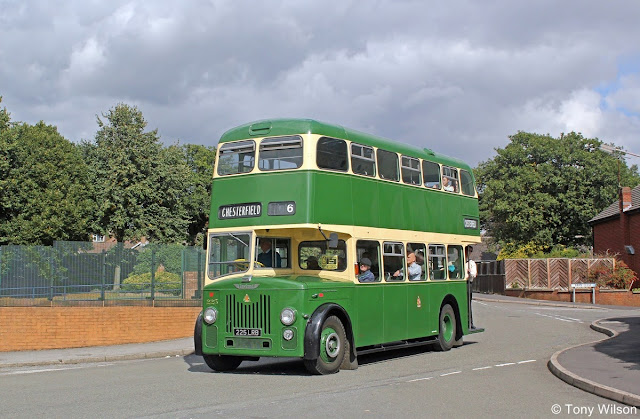 Seen as it approached the temporary 'bus station' Chesterfield 225 was soon back on another run, this time up out and over the hills to Baslow. On the way back with the author on board a much younger vehicle from the Leyland stable was captured by the camera. 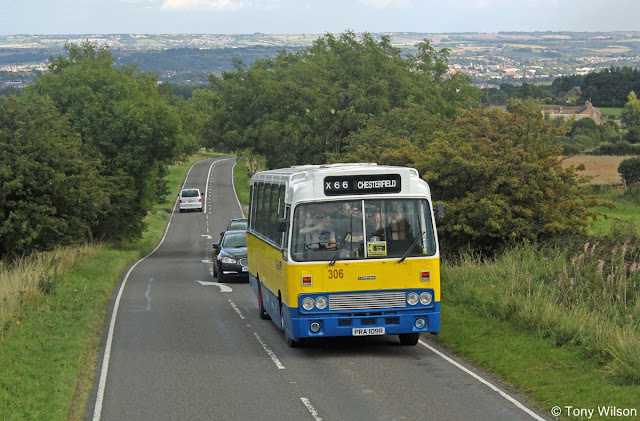 Here as it ascended the long and strenuous climb up from Cutthorpe and near to Pratt Hall, Leyland Leopard 306 in the 90s version of Chesterfield Transport livery, made a fine sight with the backdrop of Chesterfield behind. 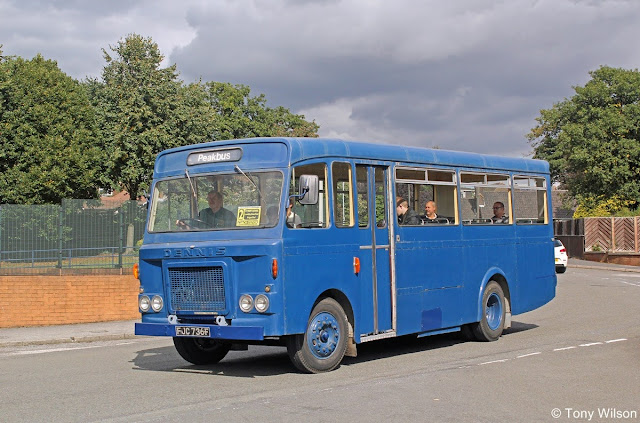 Probably never to be the star of any show, but nevertheless 'interesting' and certainly different was the former Aberconwy Dennis PAX, as it muttered its way around the area. Looking (and sounding) austere both inside and out, I think it put a smile on most peoples' faces and maybe a grimace or two on those who rode in her. 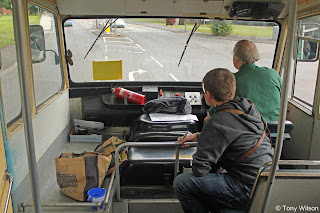 The rather austere interior can be observed in these two images, with what appears to be a lot of wasted space around the driver's area. 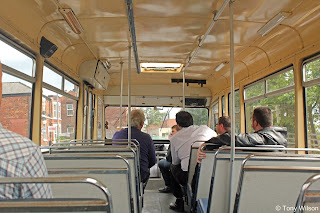 From the back seat the even more stark interior can be viewed and appreciated, or not as the case may be.


An earlier posting on the website as regards this vehicle can be found at      http://www.focustransport2011.blogspot.co.uk/2013/08/a-stranger-in-peak.html 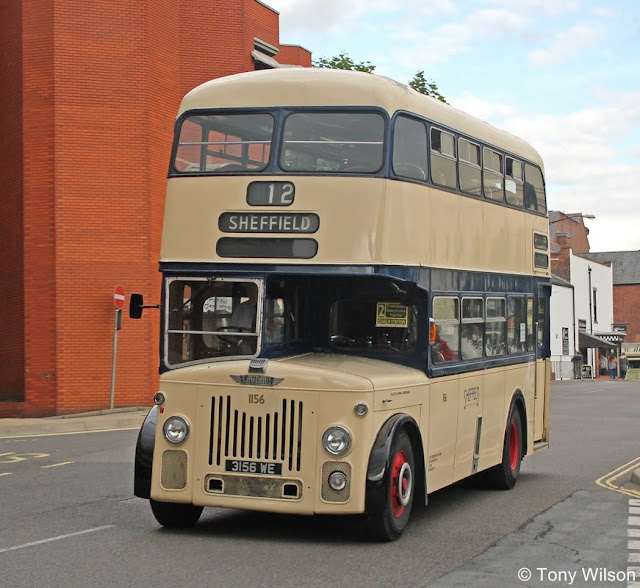 The Sheffield Leyland PD2 made its last journey of the day on the run to the Coach Station off of New Beetwell Street, before it returned home. More pictures on FocusFlickr  here