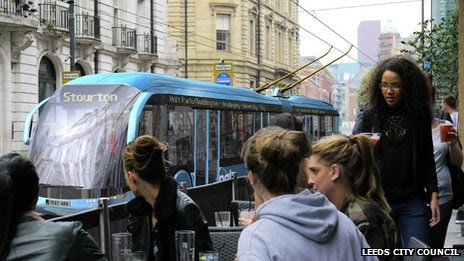 
Plans to build a £250m trolleybus system in Leeds, the first of its kind in the UK, have been submitted to the government for scrutiny.
The proposals would see a nine mile (14.8km) trolleybus route built from the city centre to park-and-ride sites in the north and south of Leeds.
The scheme was initially approved by government in 2012.
The plans will be considered by the transport secretary who will decide if a public inquiry is necessary.
'Process of listening' If given the go ahead, the scheme, known as New Generation Transport (NGT), would see Leeds becoming the first UK city to get a modern trolleybus system.
Powered by electricity from overhead wires, trolleybuses run on rubber tyres like standard buses and were popular in the UK during the early decades of the 20th Century.
Leeds was served by trolleybuses from 1911 until 1928 and the last system of its kind in the country, in Bradford, was shelved in 1972.
The Leeds route would link the city centre with park-and-ride facilities at Holt Park and Bodington Hall in the north, via the A660, and Stourton, in the south, via the A61.

• Supporters say trolleybuses are quiet, clean and do not pollute the environment
• The Leeds trolleybuses would use mainly dedicated lanes to minimise congestion and improve journey times
• The NGT system in Leeds is forecast to carry 11m passengers in its first year


The Department for Transport would pay £173.5m towards NGT, with the remaining £77m provided by Leeds City Council and West Yorkshire Metro over a six year period.
Giving initial approval to the scheme in July 2012, the then transport secretary Justine Greening said the system would generate about 4,000 jobs and boost West Yorkshire's economy.
Leeds City Council has asked local residents to lodge objections or register their support for the scheme before a deadline of 31 October.
James Lewis, chairman of West Yorkshire public transport organisation Metro, said a "process of listening" would continue.
"We will work hard to resolve issues wherever it is practicable to do so, but we are convinced the benefits of NGT will bring to Leeds and West Yorkshire will outweigh objections to the scheme."
If the scheme receives final approval, work is expected to start in 2016, with the network operational by 2018.