MORE NBfL TO COME INTO SERVICE


The next bus service in London to be gradually converted to the New Bus for London (NBfL) vehicles will be route 11 from Saturday 21st September, and will become the second in the capital to be operated entirely by this mode of public transport. The route is currently operated by conventional diesel-engined Volvo / Wrightbus Eclipse Gemini double-deckers from Stockwell Garage. 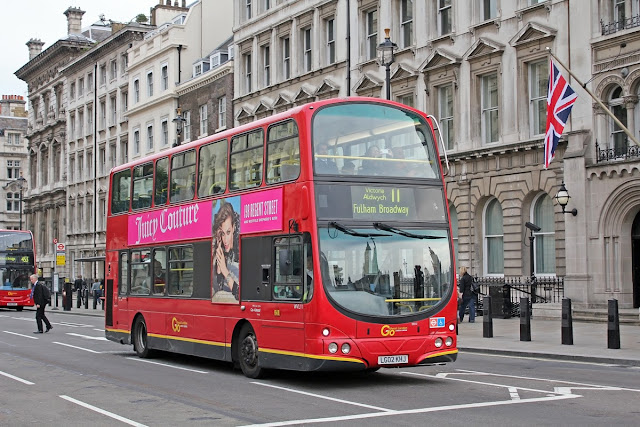 Route 11, operated by the London General subsidiary of the North East based Go-Ahead Group, runs from Liverpool Street Station via Bank, Mansion House, St Paul's, Ludgate Circus, Fleet Street, Aldwych, Trafalgar Square, Westminster, Victoria, Sloane Square and Chelsea to Fulham Broadway. When the route has been fully converted, a maximum of 25 NBfL will be operated during peak periods.

This follows the first bus route to be fully converted to operate with NBfL, the 24 operated by Metroline and runs between Hampstead Heath and Pimlico with a maximum of 27 NBfL from Holloway Garage. 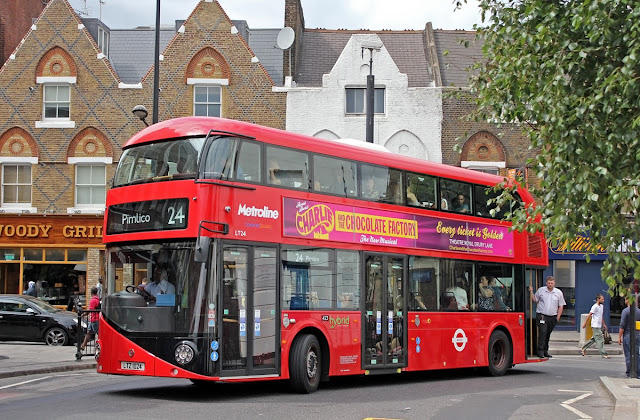 Then from Saturday 26th October route 9, which is operated by London United from their Turnham Green Garage, will also be gradually converted from Volvo / East Lancs diesel-engined buses to NBfL operation. This route runs from Hammersmith via Olympia, Kensington, Knightsbridge, Hyde Park Corner, Green Park, Piccadilly, Pall Mall and Trafalgar Square to Aldwych. A maximum of 22 NBfLs will be required at peak times. 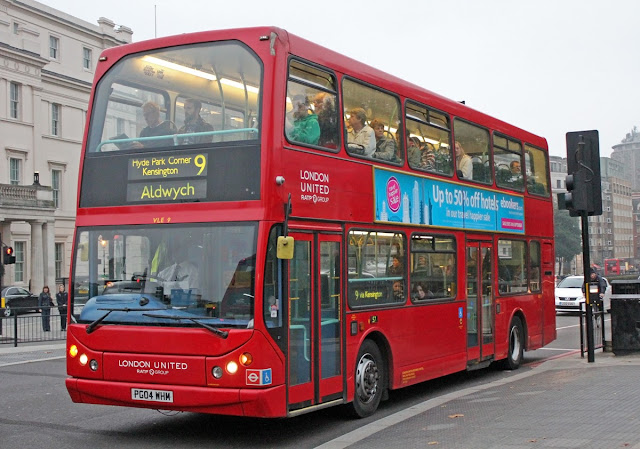 East Lancs bodied Volvo B7TLs operated by London United have been the usual type allocated to route 9, and quite by chance VLE 9 does the honours at Hyde Park Corner when bound for the Aldwych. (Colin Lloyd) 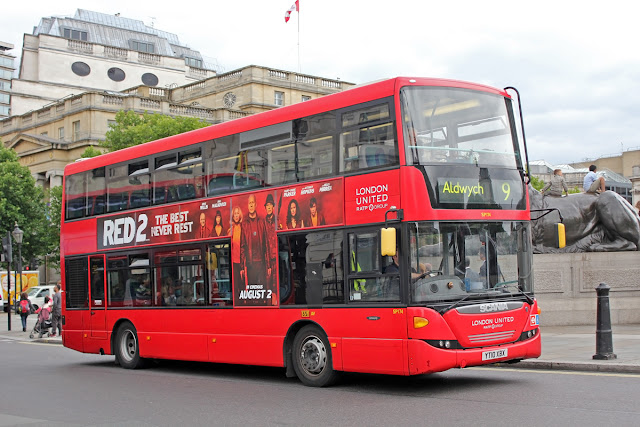 A couple of youngsters sit on one of the lion statues in Trafalgar Square as a stranger to the 9 route passed through. Normally operated by the VLE-class Volvos, on this occasion London United put out one of their SP-class Polish built Scanias to add a bit of variety. (Colin Lloyd)

The final route for conversion during 2013 will be the 390, operated by Metroline with Volvo / Plaxton Presidents from Holloway Garage. This runs from Notting Hill Gate via Queensway, Lancaster Gate, Marble Arch, Oxford Circus, Tottenham Court Road, Euston, King's Cross and Tufnell Park to Archway and will require 20 NBfLs at peak times. 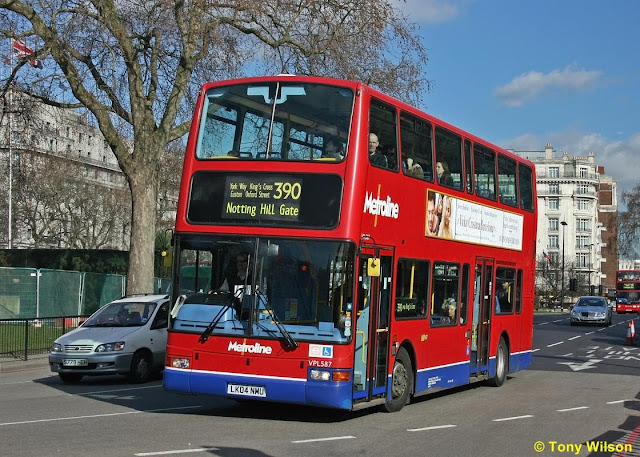 Illustrating the older blue and red Metroline livery Plaxton President bodied Volvo B7TL VPL 587 passed around Marble Arch back in 2008 (Tony Wilson)
Thus by the end of the year along with eight original NBfLs that are part of the allocation of route 38, there will be around 102 NBfL in service through Central London.

The NBfL is the greenest diesel electric hybrid bus in the world. In tests a prototype bus was found to emit a quarter of the NOx (Oxides of Nitrogen) and harmful 'PM' particles of a fleet average hybrid bus and 20 per cent less CO2. When all 600 NBfLs are in service by 2016 they will reduce CO2 emissions in the capital by around 20,600 tonnes a year. The buses are manufactured by the family-owned Wrightbus company in Northern Ireland. The order for the 600 NBfLs has resulted in the opening of a new chassis plant in Antrim and the safeguarding of 220 jobs, including 18 apprenticeships and the creation of 50 new jobs.

The Wright Group was founded 1946 and is a family owned and managed company, has pioneered low floor buses in the UK, and has earned a reputation for producing vehicles which are stylish, durable, high in quality and packed with innovative features.
As well as the manufacture of the chassis and superstructure in Northern Ireland, a number of components for the new bus are made by companies from around the UK; including engines from Darlington, seats from Telford, seat moquette from Huddersfield, wheelchair ramps from Hoddesdon (Hertfordshire), destination blinds from Middleton near Manchester and flooring from Liskeard (Cornwall). All of these companies have received a boost as a result of the new bus project.