I’ve always wanted to visit this preserved line. It has an unusual gauge, it is home to the former BR diesel shunter ZM32 now named “Horwich” and it’s accessible from Wirksworth. So a journey by vintage coach to Wirksworth enabled me to see the railway.

Established in 1985, the Steeple Grange Light Railway is an 18-inch gauge line near Wirksworth in Derbyshire. You’ll find it between Black Rocks and The National Stone Centre on the High Peak trail. It is built on the trackbed of the Killer’s branch [note 1] of the old Cromford and High Peak Railway. Motive power is provided by ex-industrial diesel, battery-electric and petrol locomotives. Passengers are carried in an old National Coal Board manrider. More information at http://www.steeplegrange.co.uk/

Much of the original stock and some track work came from the former Ladywash Mine at Eyam and more information about the history can be found at http://www.steeplegrange.co.uk/history.htm and the locomotives and rolling stock details can also be found from the menu on the first link.
Actually the railway runs two lines, a branch line to a quarry and the “main” line towards Middleton. The branch line is close to the High Peak trail but not seen from the latter due to vegetation. At the end of the branch you get the opportunity to see the quarry formed of limestone created millions of years ago when this area was under water. Knowledgeable and enthusiastic staff show you things to look out for in the rocks and foliage like fossils and fool’s gold. [I don’t often manage to get a bit of chemistry into these articles.]
The main line heads towards Middleton, a future goal for the railway to reach, and travels up a 1:27 incline to Porter Lane Bridge – its 120ft length housing a second line used to store equipment, wagons and things like a turntable. Passing Recreation Ground Bridge and station you reach Sandyhill Crossing. Just the other side of this is the current end of the line, but the train travels back to Recreation Ground Station for you to get out and stretch your legs whilst staff explain the history of the line and answer your questions. My train had their chairman Martin Smith as Guard, and it seems an appropriate time to thank him and others at the railway for making my visit so enjoyable. Several locomotives are actually stored off site, but they offer refreshments, and a good place to stop off for anyone walking or cycling the High Peak Trail. I definitely recommend a visit to this friendly railway.
The railway is normally open Sunday afternoons and Bank Holiday Mondays plus Saturday afternoons in the summer months. You can also ring 07769 802587 during these operational times to check the railway is running.
[note 1] Killer is the name of the original brothers who owned the quarry and paid for the construction of the standard gauge line in 1884. This line ceased in 1967 when it was found to be more cost effective to use road transport. 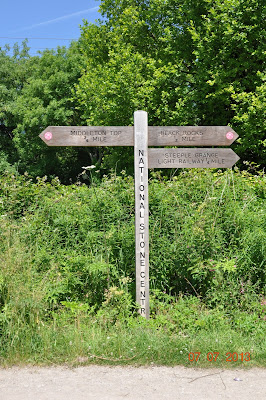 The railway is signposted from Ravenstor station on the Ecclesbourne Valley Railway, but it is uphill and can be slippery in wet weather. You can also walk to it from Wirksworth, and I chose to walk back to the town, but the best signage is along the High Peak Trail, with parking facilities at The National Stone Centre. 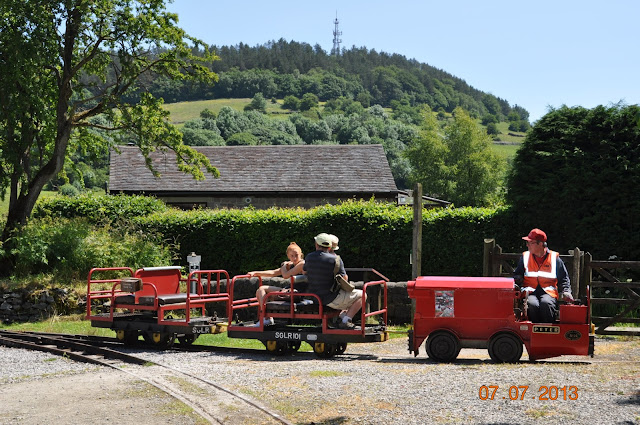 “Peter” takes a few passengers on a trip to the old quarry. This loco is one of three at Steeple Grange that come from the Derbyshire manufacturer Clayton Equipment. It is a Compact 1¾ tonne, 7hp (5.2kW) locomotive, designed to work through tunnels only 3' 6" in diameter. It has an electronic controller, and a single traction motor driving both axles through spiral reduction gearing. It previously carried the name “Lady Margorie”. It was renamed following the sudden death of its owner and the former SGL Society chairman Peter Sellers. 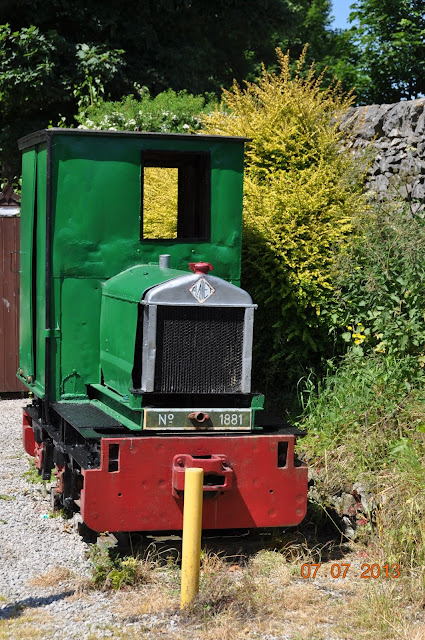 Loco1881 is one of three locomotives which are products of FC Hibberd & Co Ltd of Park Royal in London. It was built in 1934 and worked on a 1' 8" gauge tramway at Crowle Brickworks near Scunthorpe, Lincolnshire. It is a Hibberd "Y" type, with a Ford 8hp petrol engine, and fitted with a cab. The line closed in June 1968. The engine is not operational and needs re-gauging. 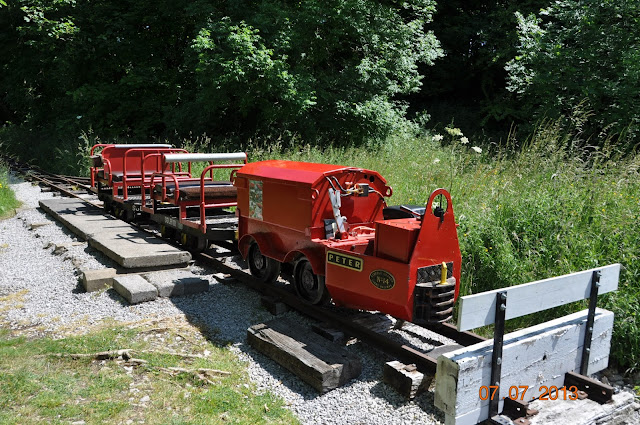 “Peter” and train at the end of the quarry branch 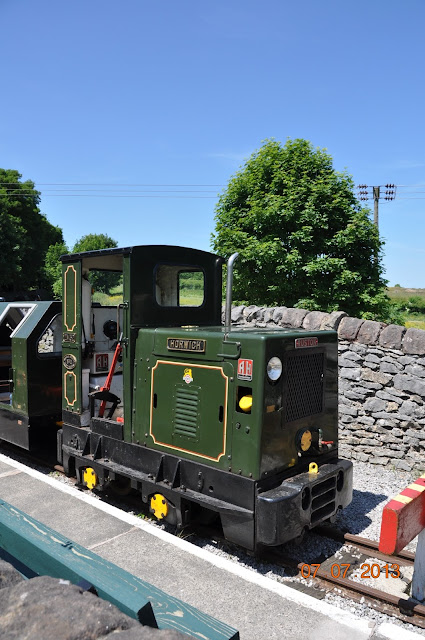 The star of the line has to be ZM 32 “Horwich”. This famous locomotive is a conventional Ruston & Hornsby 20hp Class LAT locomotive, but enjoys considerably more celebrity than any similar machine due to it having been in the ownership of British-Railways. It was built in 1957 as works number 416214 and worked for eight years on the 18" gauge railway at Horwich Locomotive Works in Lancashire alongside “Wren”, the last of Horwich's 0-4-0 saddle tanks now at the NRM 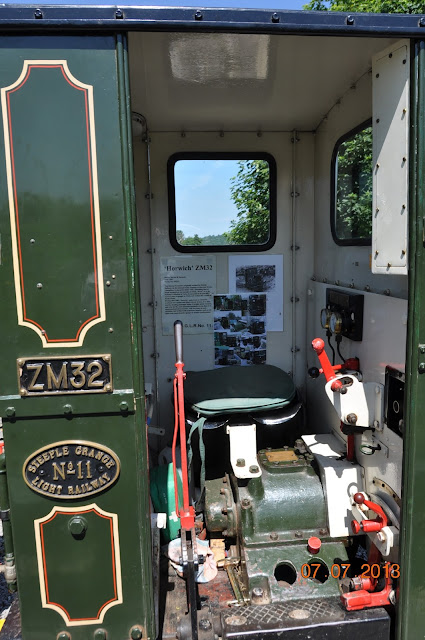 View of inside the cab of “Horwich” 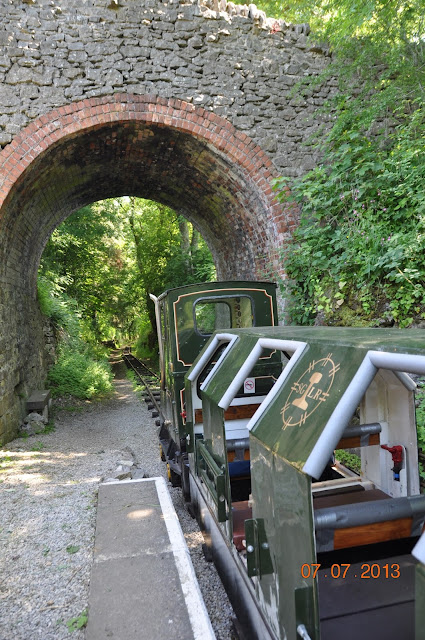 The train seen at Recreation Ground Station showing 4w 16 seat Bevercotes Manrider. This vehicle has been fitted with air brakes and end windows, and was regauged from 2' 3" to 18". 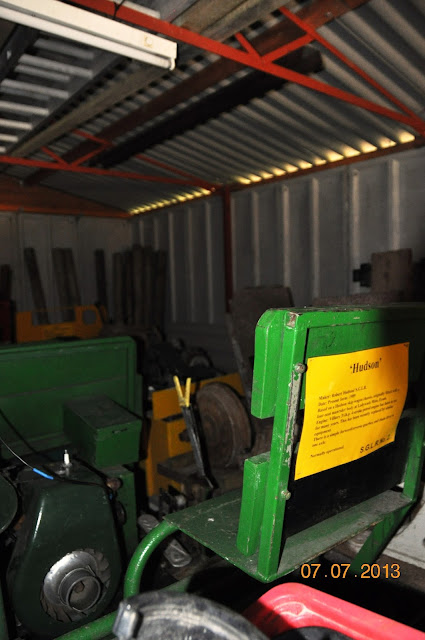 A poor shot of “Hudson”. This machine was constructed by Alwyn Ambrey of Bakewell in 1988 and is based on the frame of a small four-wheeled manrider of Hudson manufacture obtained from Ladywash Mine. The power unit is a Villiers petrol engine of uncertain vintage, cannibalised from a cricket pitch roller! A chain drive connects the engine to a sprocket fixed on one of the axles. The trolley accommodates the driver plus two passengers and is operational. 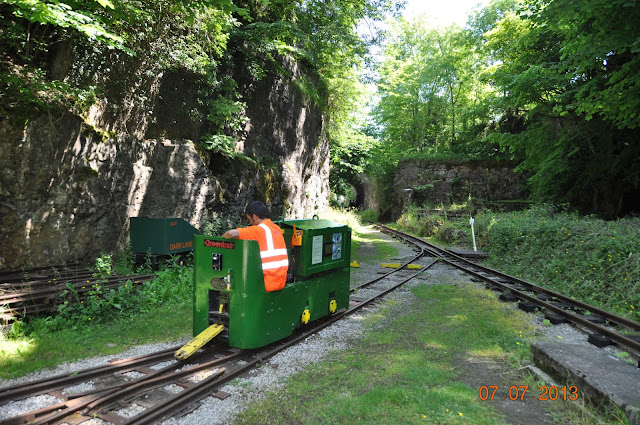 “Greenbat” arrives at the carriage shed. It is a 5hp battery-electric locomotive built by Greenwood & Batley Ltd of Leeds, works number 6061, supplied new in November 1961 to the Halesowen Steel Co Ltd for use on the railway system inside their plant in the Black Country. It operated there until the works closed in March 1974. 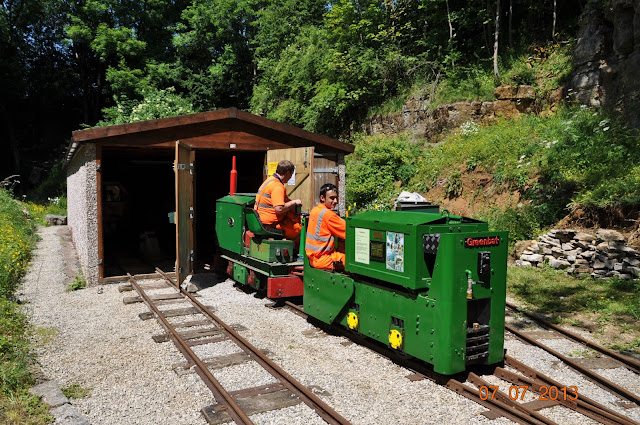 “Greenbat” pulls out “Lizzie” for a photographic opportunity for me 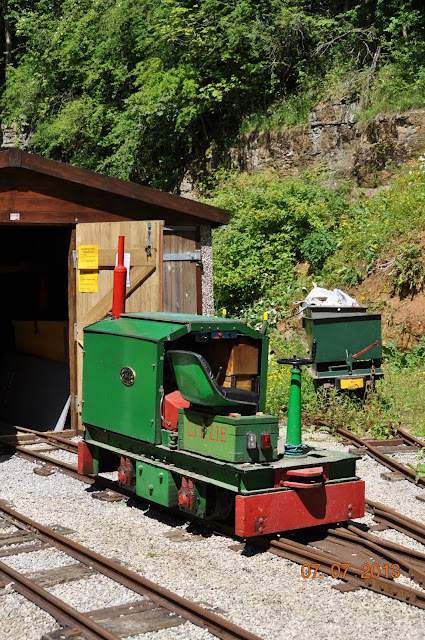 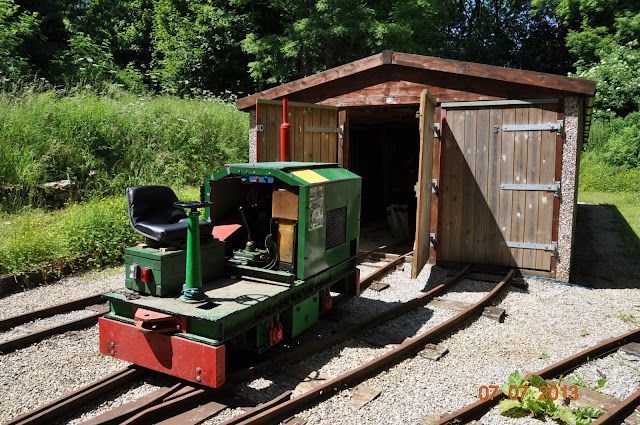 “Lizzie”. This locomotive dates from 1973 and operated on a 2' gauge line at the Spun Pipe Plant of the Clay Cross Co Ltd of Clay Cross, near Chesterfield. It was one of two diesel-engined locos built there using parts supplied by R & A Lister & Co Ltd of Dursley, Gloucestershire. It’s been re-gauged to 18 inch and has been fitted with a Lombardini diesel engine and is operational. 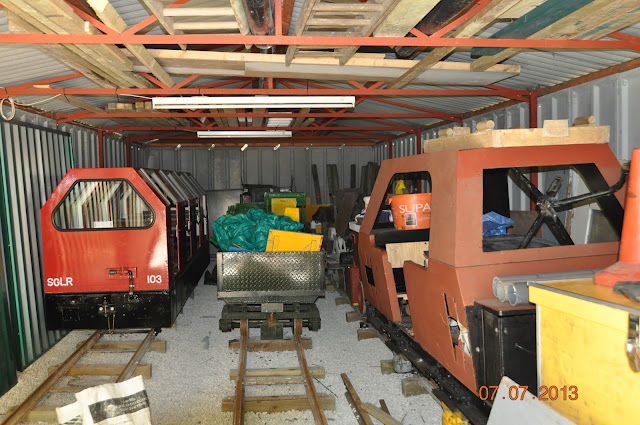 Inside the carriage shed, showing an assortment
of locomotives and rolling stock 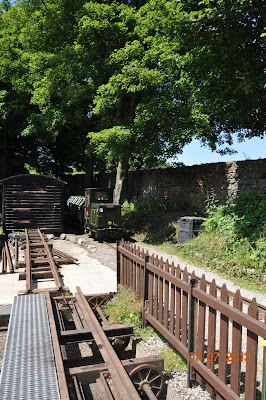 “Horwich” is seen passing the traverser