Following the recent response from Stagecoach on the Tyne & Wear Proposed Quality Contract we now list below the response from Go North East. 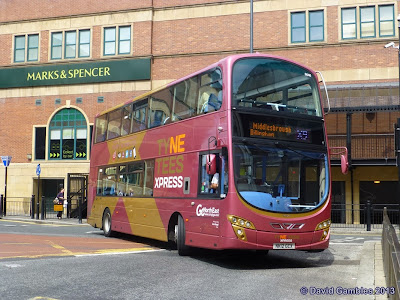 Go North East has expressed serious concerns about the risks and costs built into Tyne and Wear’s proposed bus Quality Contracts Scheme and recommended partnership working as a quicker and more effective way of improving bus services in the region.

In its formal consultation response, Go North East highlighted multiple flaws in the scheme, which if implemented would be the first experiment of its kind in the UK and would transfer the financial risks and costs of operating services to local taxpayers. These include:
·         Higher risk – with local councils exposed to the danger of falling revenue,  deepening a deficit which has to be met by local taxpayers;
·         Higher costs for fare payers and taxpayers – with the contracting system itself creating a new layer of costly bureaucracy which is not needed either under the current system or under the partnership proposal;
·         Inflexibility – Nexus setting up long term contracts which eliminate competition for up to 10 years at a time, and which make it impossible to respond quickly to new public requirements for new routes or new bus technology.
Go North East managing director Kevin Carr said: “Nexus' calculations of bus revenue under the QCS need only be 1 per cent lower than forecast for the scheme to be unaffordable to the tune of £11 million.

“Costs need only be one per cent higher than forecast for the funding shortfall to be another £13.3 million.”
In contrast, the partnership proposal from the North East Bus Operators’ Association (NEBOA), of which Go North East is a member, would provide real benefits including:


A new Bus2Busticket enabling passengers to interchange between operators;

Mr Carr said: “Independent surveys show that bus passengers in Tyne and Wear are the most satisfied of any UK Metropolitan area.  Go North East has spent 26 years responding to what customers want - routes direct to city centres, fares that suit all needs, and branded modern buses.

“The Nexus scheme will freeze progress for up to 10 years, increase fares for bus passengers in some areas by over 20 per cent, and expose local taxpayers to the risk of fare revenue not meeting the cost of the scheme.  The partnership proposal offers the service improvements that passengers want, without unnecessary delay, and will give Nexus the benefit substantial cost savings. It’s a far superior option for the people of Tyne & Wear.”