We have all been there: waiting for ages for a bus only for it to eventually come, followed by two more right behind it.
It's a cliche because it's true - and here's the website that finally proves it. 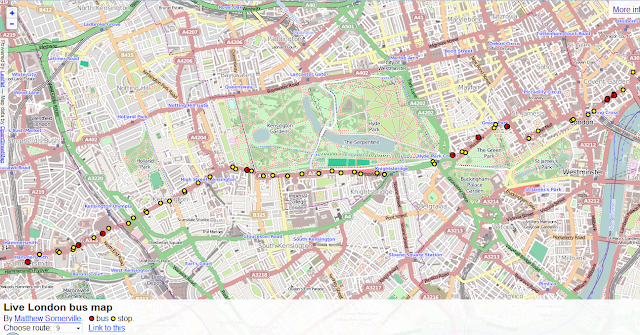 Designed by web developer Matthew Somerville, the Live London Bus Map shows exactly where buses in the capital are at any given moment.
With red dots symbolising buses and yellow ones representing bus stops, the map gives live updates about every bus route in the capital

Would-be passengers can pick their bus route and then see how far away the next bus is from their stop.
And while using the map will give blessed relief to everyone who's waited at a bus-stop, looking anxiously up the road wondering where the bus is, it also proves that they really do come in threes... or even fours. 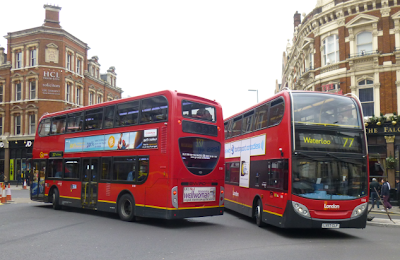 Somerville, 33, came up with the idea after designing a similar live map for the Tube, showing where London Underground trains were.
Someone emailed him out of the blue asking if he would create a map for London buses, and so he used the same code he'd written the Tube map to design one for buses.
Using data from Transport for London (TfL)'s Countdown live bus arrivals service, Somerville created a map showing all the bus stops (yellow dots) and buses (red dots) with a pop-up menu where you can choose which bus number you're waiting for.
Data from every bus' GPS is fed into a central system operated by TfL, which uses it to calculate each bus' expected arrival time at each bus stop.  Mr Somerville's live map uses this information to plot his map.
The Birmingham-based web developer said he had noticed the phenomenon known as 'bunching' whereby there are long gaps between buses and then several come at once.
He said: 'What tends to happen is that the bus at the front has more people to pick up and so gets delayed, while the bus behind it has fewer people to pick up so it gets ahead, which causes them to group together.'
Wikipedia has a whole page devoted to bus-bunching, also known as clumping, convoying or platooning, and has several theories as to why it occurs.
As well as the most obvious theory, upheld by Mr Somerville, other suggestions include drivers going at different speeds, and drivers adjusting their speed deliberately so that other buses pick up more people than they do.

A Transport for London spokesman told MailOnline bus bunching did occur and they had staff devoted to regulating gaps that might occur.
He said: 'We have one main control centre for the bus network and smaller sub-centres where staff have access to real-time information about where the buses are.
'If there are gaps or hold-ups, the control centre can communicate verbally with the drivers and via a screen to regulate the service.
'Ways of doing this include holding buses at stops, or diverting buses from a route where several buses may have been held up at roadworks and sending them on ahead so there's a more frequent service for those waiting along the route.'
There are around 8,500 buses operating in the capital, stopping at 19,000 bus stops, all of which are represented on the map.
TfL says around 2,500 bus stops have dot matrix boards giving countdowns until the next bus, and they plan to increase that number.