During this week of Remembrance and as we approach the respective services and associated events over the weekend and on Monday the 11th of November, a number of bus and coach operators up and down the country are marking this period with various forms of the Poppy symbol on their vehicles, for the Royal British Legion Appeal.
Appearances of the poppy appear from the modest single symbol to a plethora of them over three sides of buses. In London ten buses operated on Transport for London routes have been vinyled up on three sides of their bodywork, and will generally operate on the network through Central London. The buses are seven ADL Enviro400 type from Abellio (9548), Metroline (TE 904 and 906), Stagecoach (10182 and 10196) and Tower Transit (DN 33780 and 33776), whilst the balance is made up of three Wrightbus Gemini Eclipse, two from Arriva London (DW 240 and 296), and one from London Central (WHV 12). 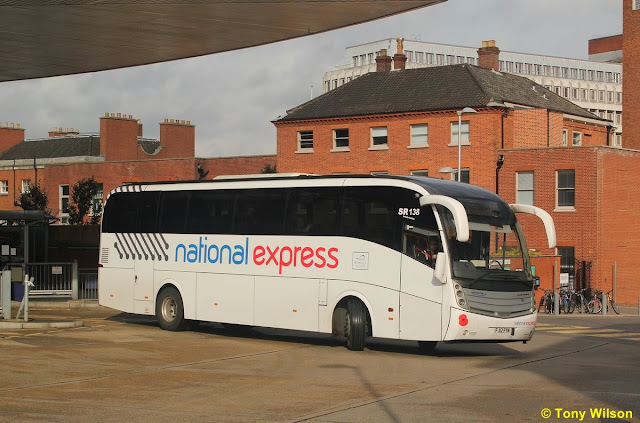 A number of National Express coaches have a subtle poppy attached to the bodywork at the lower front of the bodywork. A Volvo B9R from Welsh operator Edwards of Llantwit Fardre negotiates its way through the bus station in Norwich (Tony Wilson) 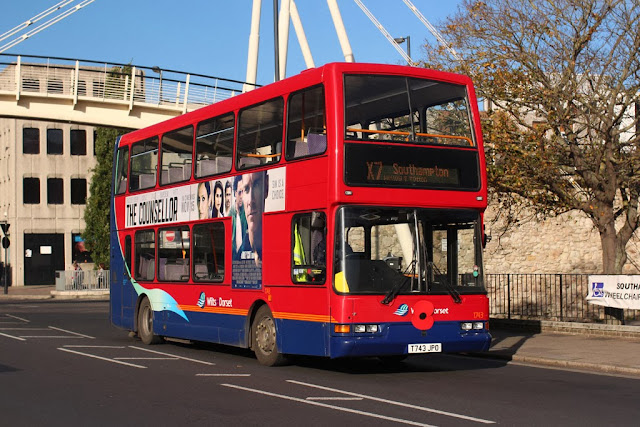 Slightly more prominent though, is an enlarged poppy itself that is affixed to various vehicles at the front, such as on this East Lancs bodied Dennis Trident operated by Go-Ahead's Wilts and Dorset subsidiary. Number 1743 is illustrated here in Southampton (Terry Wong Min) 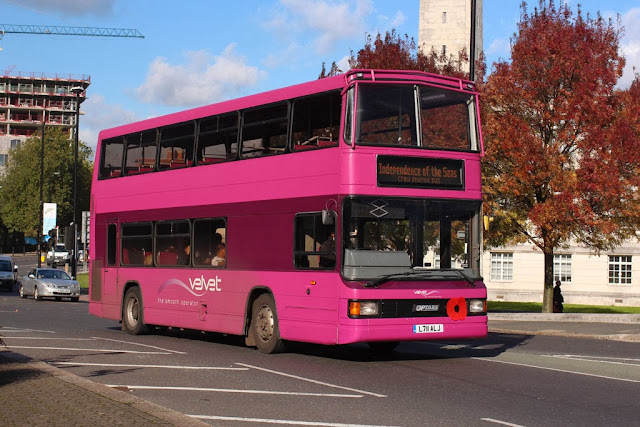 And in the same city centre an Optare Spectra now with the Velvet bus company sports a similar sized poppy on the grille. This was a vehicle that also began its working life with the Wilts & Dorset company (Terry Wong Min) 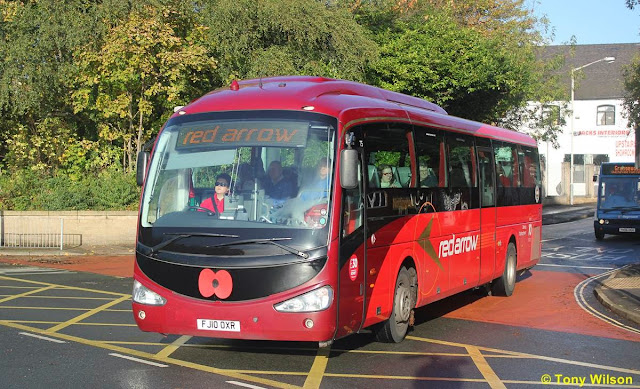 Trent 75 in Chesterfield on the Red Arrow service to Nottingham via Derby. An apt addition to the red livery affixed to the front of the majority of vehicles operated on the service. Many other buses within Trent also operated in this fashion, especially on the city of Derby routes (Tony Wilson) 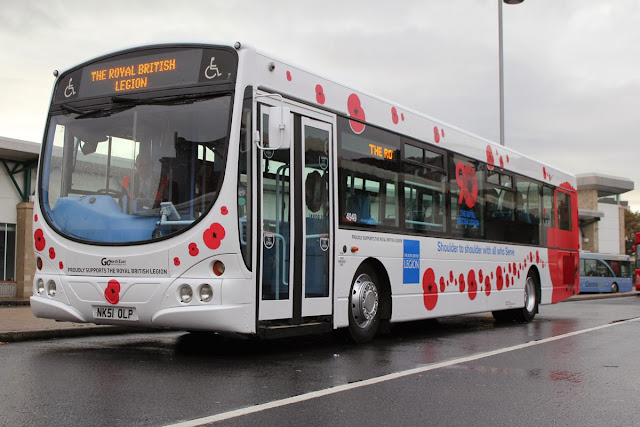 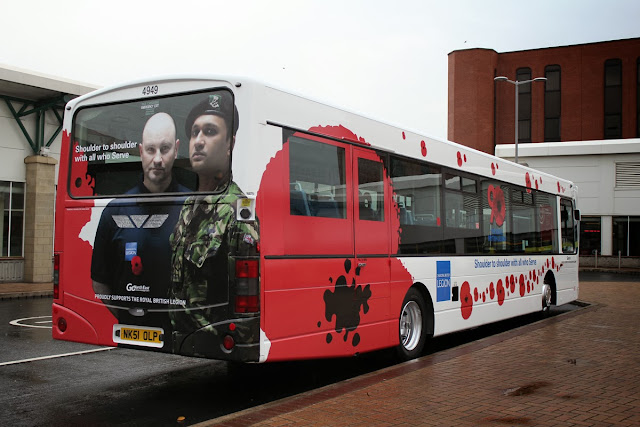 Go North East have entered into the spirit of the occasion by taking Scania 4949 and adorning the Wrightbus bodywork with full allover vinyls for the appeal. Indeed lettering on the vehicle states "Go North East proudly supports the Royal British Legion", with servicemen featured in the rear windows (Steven Hodgson) 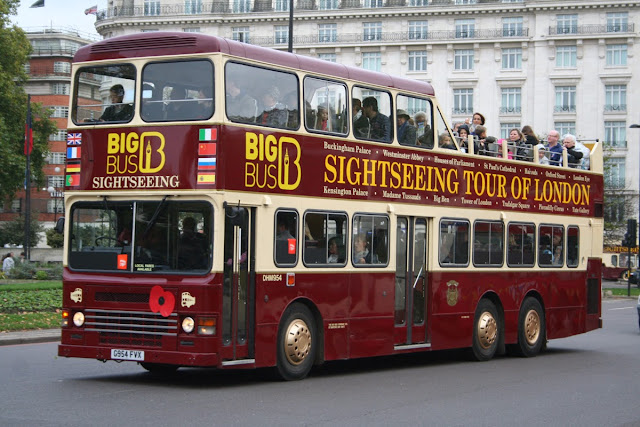 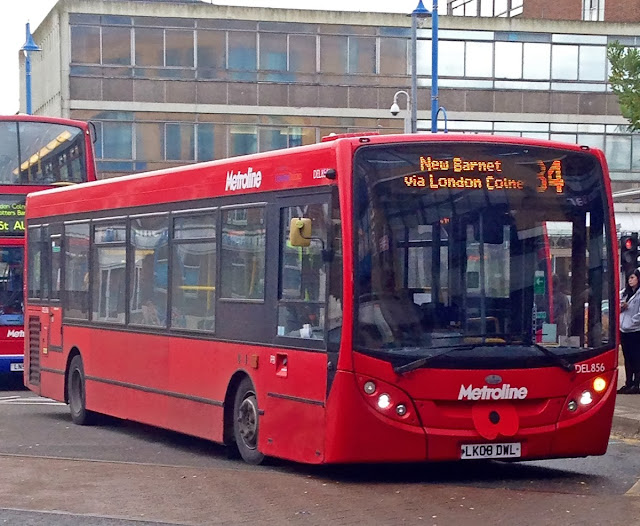 Some buses were also operated out in the London suburbs with just the enlarged poppy affixed to the front of buses. Buses such as Metroline's DEL 856 an ADL Enviro200 here at Potters Bar Station on the cross-county boundary service 84 to and from St.Albans in Hertfordshire (Daniel Sullivan) 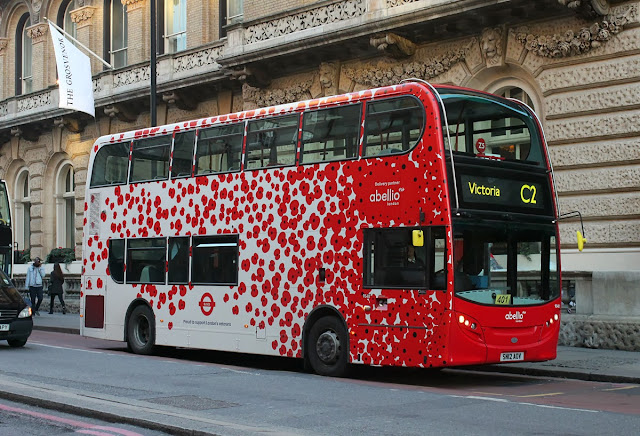 But it is the ten buses from various London operators who feature the poppy symbol most prominently, on three sides of their bodywork. Abellio London fleet number 9548 is an ADL Enviro400 shown here as it passes along Buckingham Palace Road, Victoria on route C2 from Parliament Hill Fields (Richard Godfrey) 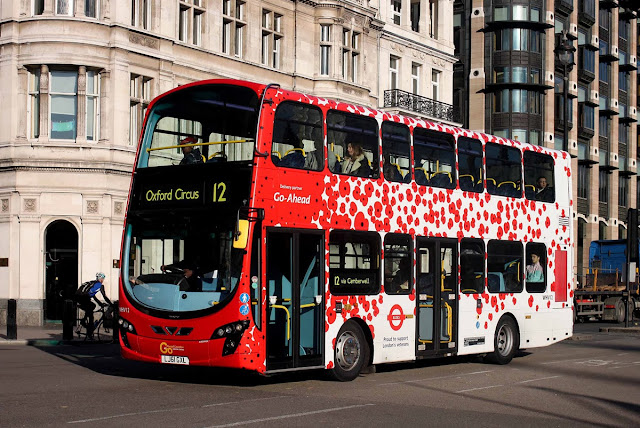 Go-Ahead subsidiary London Central WHV 12 a Wrightbus Gemini Eclipse 2 bodied Volvo B5LH hybrid on route 12 in Bridge Street, Westminster on the approach to Parliament Square. Shortly it would turn in Whitehall and pass the Cenotaph, a significant focus of attention during this time (Richard Godfrey) 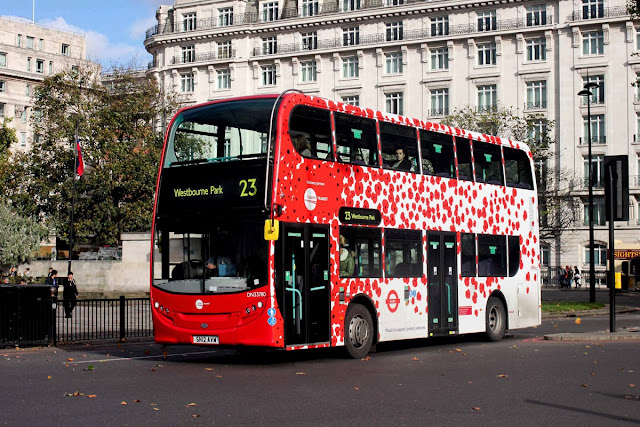 The newest company to join the ranks of operators on the network of Transport for London routes is Australian owned Tower Transit. In recent months they took over around half of the First London operations (Metroline took the other half), and ADL E40D DN 33780 was one of the vehicles acquired. The nearside aspect is shown here in autumnal sunshine at Marble Arch (Richard Godfrey) 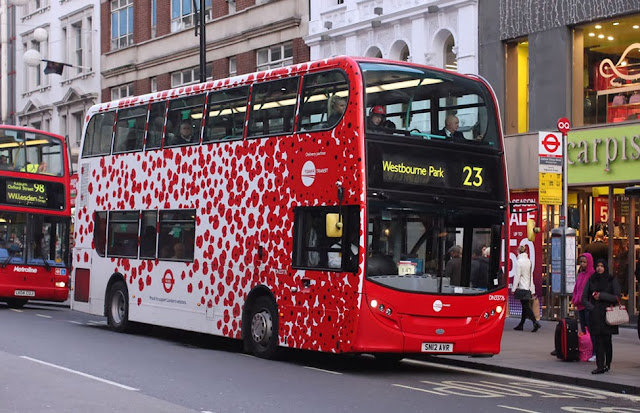 A similar vehicle on the same route operated by Tower Transit is DN 33776. Advertising such as this on London's buses though must retain an all red livery at the front (Terry Wong Min)

A footnote. On Monday 11th November, two Routemasters RM 1005 and RML 903 will respectively operate several journeys over  routes 211 (Waterloo-Hammersmith) and 24 (Parliament Hill Fields-Pimlico). They have been timed so as to pass by or be near to the Cenotaph at 11.00am where they will pause for the 2-minutes silence.
And one more footnote. On the 7th November the Duke and Duchess of Cambridge rode upon RM 1005 to High Street Kensington Station, where they surprised passers-by and passengers as they assisted with the Poppy Appeal.
There are links to this and associated events and can be viewed here and here