Following an extension of time allowed for responses to the proposed Quality Contract in Tyne & Wear, Stagecoach NE Managing Director Phil Medlicott has submitted a response letter that can be viewed on line. 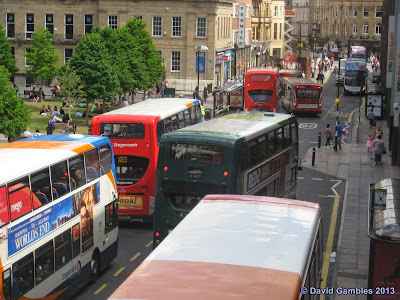 The following press release has also been issued

Transport operator Stagecoach today (22 November 2013) submits its full response to proposals by Nexus to introduce bus contracts in Tyne and Wear, exposing how massive flaws in the plan will impact on living standards for bus passengers and taxpayers.

A detailed review by independent economic experts Oxera of the proposals by the transport authority in Tyne and Wear has established that the plans are fundamentally flawed, unaffordable and fail to meet key mandatory Government tests. It concluded bus operators’ partnership proposals were the better way forward to improve bus services.

The news comes just a week after more than 7,000 passengers and bus employees across the region signed a petition opposing the Nexus proposals. They are concerned about the impact of the plans on bus fares, council tax bills, bus workers' jobs and pensions.

Tyne and Wear currently has one of the best used bus networks in the country, with customer satisfaction at 85%. Around 90% of the bus network in Tyne and Wear is provided commercially by bus operators, with Nexus currently spending £10million a year on direct support for socially necessary but otherwise unviable services.

Analysis by Oxera has now revealed that, despite attempts by Nexus to manipulate the business case for bus contracts, there is a funding shortfall of £157million over 10 years. The deficit is even after accounting for use of £78million in contingencies set aside by Nexus.

Oxera has calculated that, for Nexus’s plans to be affordable, fares would have to rise by 5.3% above inflation every year. The only other options to close the gap would be huge council tax rises or cuts to services.

Oxera has found that the level of fares increases needed to make the bus contracts scheme affordable would lead to 83million fewer bus trips being made in the region over a 10-year period than if the current system were to remain in place. The analysis also shows that Nexus has overestimated the bus patronage forecast in its proposals by 149million passengers over a decade.

A local transport authority seeking to introduce a bus contracts scheme must demonstrate that the scheme will be affordable and will meet five public interest criteria. This includes its impact on bus use, quality of service, meeting local transport policies in an economic, efficient and effective way, as well as the effect on bus operators and people in the area.

Oxera - which has advised companies, government departments, competition authorities and regulators across the world – concluded that the bus contracts scheme failed on virtually every measure. It also identified "a number of weaknesses" in the modelling used by Nexus to underpin its proposals, highlighting inconsistencies, omissions and a lack of transparency. Nexus had also failed to use the mandatory Government tests in assessing the case for a contracts scheme.

In an authoritative assessment of the financial basis of the bus contracts plan, Oxera said “there are a number of substantial deficiencies in the numerical modelling undertaken by Nexus, which means that it is not possible to have confidence in the results”.

Oxera found that Nexus had understated costs, its economic forecasts were “not consistent with the historical pattern” and it had also overstated the impact on school services and tendered bus services of not proceeding with a bus contracts scheme.

An estimated 2,500 bus drivers - as well as around 680 support and ancillary staff – are employed at 17 different bus operators across Tyne and Wear. Nexus has failed to appreciate the complex pensions and TUPE implications for bus workers, who could face cuts of up to a third in their future pension benefits.

Phil Medlicott, Managing Director of Stagecoach North East, said: “The Oxera report is a damning independent analysis of a scheme that has already seen hundreds of thousands of pounds of public money squandered and not one single bus improvement put in place.

“It backs up 100% what customers, bus workers and operators have all said about the Nexus proposals. These misguided plans would hit living standards for ordinary people in Tyne and Wear and damage the bus network.

“I hope the transport authority will now fully understand the widespread objection to the contracts proposal and instead work in partnership with bus operators on improvements and investment that we want to start delivering for people right now.”

Bus partnerships are in place in most other metropolitan areas in England, with operators and transport authorities working together to improve services. In South Yorkshire, the award-winning voluntary Sheffield Bus Partnership has helped transform bus use since it was launched in October 2012. Reliability of services is around 99%, customer satisfaction is up and complaints down by 30%. Recent figures show adult fare-paying passenger numbers have risen by 14% compared to last year. Operators have invested millions of pounds in new greener bus fleets, while the partnership has also secured additional Government funding. Further investment in Sheffield’s bus network and roads - including enhanced bus stops, real-time information and improvements for all traffic at key junctions - will begin in January 2014.

Bus operators in Tyne and Wear have proposed a similar comprehensive and updated package of improvements to services. It would deliver all the benefits passengers want, without unnecessary costs and delay, and would save Nexus money.

Under a proposed partnership with the transport authority, customers would benefit from:
Oxera found the partnership proposals were affordable, more likely to boost bus use, improve the quality of bus services through investment, save public money, and meet the objectives of the transport authority’s bus strategy in an economic, efficient and effective way. It concluded: “The VPA is a preferred policy option to the QCS, as it results in higher patronage, lower costs to local taxpayers and lower fare rises”.

The consultation on the Nexus bus contracts proposals closes today (22 November 2013) and members of Tyne and Wear Integrated Transport Authority are expected to decide on its preferred way forward in March 2014.