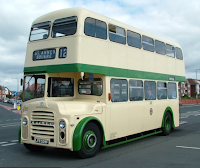 Bus drivers from Blackpool claim they have been left "high and dry" after being told they no longer have jobs.
Classic Bus North West stopped the 80 service between Blackpool and Preston via Poulton last week.
Driver Richard Walmsley said half the 30 drivers and 15 administration staff had been sacked with no notice.
Lancashire County Council said it was trying to find out if Classic Bus North West had gone into administration. The company was unavailable for comment.

The service had been running seven days a week, with the county council subsidising evening and Sunday services between Poulton and Preston.
A council spokesman said: "Classic Bus North West has terminated the service without the required 56 days notice to the Traffic Commissioner.
"They have also broken their contract with Lancashire County Council to provide an evening and Sunday service, which would require 12 weeks notice.
"Lancashire County Council will inform the Traffic Commissioner of Classic Bus North West's actions."
Drivers claim that they were given no notice and the company still owes them thousands of pounds.
Mr Walmsley, who has been driving for the company for nine months, said: "We're absolutely gutted.
"(The company) owes us two months' money and many of us are behind on our mortgages and rent. http://www.bbc.co.uk/news/uk-england-lancashire-25518788

The Red Rocket service which ran between Blackpool and Manchester has also ceased to operate.
http://www.redrocketexpress.co.uk/


The website at http://www.classicbus.org.uk/ is still operational (left & below)and shows pictures of the fleet.

Local people who have followed the performance of this company over the last few years, have very little respect for the way that it has been run.


Following a series of business failures, a company called Oakwood Travel Services was taken over, complete with operators licence and discs and it is this company name that is currently used for the operation. None of the previous companies have been wound up and creditors have remained frustrated by this fact.
A company that comes along and offers cheap prices to run council contracts is a gift to the local council who is strapped for cash. Unfortunately it does no good in the end when passengers are let down. Local competitors who operate by the book and quote realistic prices loose out on the contracts resulting in their businesses being put at risk so everyone looses in the end. It will be interesting to see if those concerned re-appear under yet another name and whether they will be allowed to do so by the Traffic Commissioner and the local councils concerned.
Watch this space!