A CG image showing the Crossrail line, and the new station, with the HS2 line behind a row of skyscrapers

Boris Johnson is to set up an Olympic-style regeneration agency to transform a rundown area into a thriving new district and deliver a £6 billion economic boost to London.
The Mayor wants to use Crossrail links and the planned HS2 route — which will converge at Old Oak Common —  to spur the creation of 80,000 homes and 20,000 jobs.
By 2025 a “mini-Manhattan” of skyscrapers and apartments will shoot up around the station in north-west London. The Mayoral Development Corporation in Old Oak Common, known as MDC, will have the same powers that are being used to create a Games legacy in Stratford. It will begin  planning work next year at the semi-industrial 195-acre site north of Wormwood Scrubs and Westway. The establishment of an MDC is subject to London Assembly approval.
Old Oak Common is set to become London’s rail “superhub” within a decade, serving 250,000 passengers or the equivalent of Waterloo station. Deputy mayor for planning Sir Edward Lister is masterminding the plan to use these enhanced rail links as a spur to regeneration such as that achieved around King’s Cross station.
The Mayor believes that HS2 bosses have failed to attract private investment, both at Old Oak Common and the high-speed line’s London terminus at Euston,  and wants to lead the way.
Sir Edward told the Standard: “The big opportunity from HS2 is regeneration, and this must not be missed. In London, Old Oak Common and Euston can be made into an entirely new city quarters delivering tens of thousands of homes and jobs for Londoners but only if we get the HS2 design and funding correct.”
The MDC will be charged with improving other transport links in the area which is poorly connected, building new roads and bridges.
The development will be funded through borrowing against enhanced land values which it is predicted will eventually be in line with Kensington & Chelsea. A levy will be charged on local businesses, creating a template for other schemes along HS2.
The MDC — the first such body since the Olympics —  will also hand the Mayor planning powers over the entire Old Oak Common site which straddles the boroughs of Hammersmith & Fulham, Ealing and Brent.
The Mayor has presented HS2 bosses with a list of transport demands to maximise the benefits of Old Oak Common. It wants ministers to fund a new Overground station; to create a £25 million link with the existing West Coast mainline and to fund new roads, pathways and cycle routes.
Isabel Dedring, deputy mayor for transport, said: “By stripping the cost out of HS2, we also risk stripping out the big increase in land values it can create, the very thing that can play a major role in funding the project.
“If we get this right, Old Oak Common could be the next King’s Cross-St Pancras of the west for London.”
A City Hall study into Old Oak Common has recommended: “A new metropolitan destination connected to existing public transport hubs and development opportunities and exploiting the assets of the Grand Union Canal and Wormwood Scrubs; overcoming severance and creating a coherent and legible street network; and optimising development, which may include some tall buildings, around the transport hubs.”
The full MDC plan will be announced next month at a summit of HS2 chiefs hosted by the Mayor at City Hall.
Yesterday MPs began the process of making the laws to enable work on the £50 billion HS2 scheme to begin with the publication of a 50,000 page bill. HS2 is planned to run between London and Birmingham by 2026 and on to Manchester and Leeds by 2033.

However, what impact this will have on local bus services in the area remains to be seen. Possibly within or closely adjacent to the planned area, there are three major garage premises of operators for bus routes in the Transport for London network. Two of these are based in nearby Atlas Road, N.W.10; London United with around 56-buses for routes 220,283,440,E11 and Tower Transit with around 100 for routes 28,31,266,328 along with Metroline's premises at nearby Station Road with another 100 buses for routes 18,187,206,226,228. To provide alternative premises could prove to be a logistical and not to say financial nightmare in property-rich London.

Crossrail's first tunnel across London has been completed, 18 months after work began on it.

The 4.2mile route, which links Royal Oak near Paddington to Farringdon, was excavated by Crossrail's 1,000 tonne, 150metre long tunnelling machine nicknamed Phyllis.
Its completion means more than half of the network's 42mile underground train routes have now been completed ahead of its scheduled opening in 2018, Crossrail said.
London Mayor Boris Johnson said: "The completion of the first section of Crossrail tunnel is a fantastic achievement for everyone involved in delivering this landmark infrastructure project.

Tunnelling: More than half of the underground tunnels for Crossrail trains have now been completed

"As well as creating thousands of jobs in the capital and across the UK, it is sending out a very strong message that London is planning for the future and delivering on a scheme that will revolutionise rail travel in our great city.”
A time capsule containing newspapers, a London A-Z and other memorabilia was enclosed within the part of the tunnelling machine which remains in use.
A further three machines are due to complete tunnelling work at Farringdon - where more than 150,000 passengers are expected to use the service daily - over the course of the next year.

Next stop: another three machines will finish tunelling during the course of the next year

The journey from Farringdon to Tottenham Court Road will be slashed to just three minutes. Heathrow will be reachable in half an hour, and Canary Wharf in nine minutes, according to estimates.
The completed tunnel was today visited at the Farringdon entrance by Chief Secretary to the Treasury Danny Alexander, who became one of the first visitors to set foot inside the space.
He said: "This first tunnel is a key milestone in the journey towards a better transport network in London. Crossrail will transform the way people travel, slashing journey times from the City to Heathrow by around 30 minutes and increasing London's rail capacity by ten per cent.

Whilst on the subject of new projects and infrastructure in London, two brand new all-electric buses have now begun service. 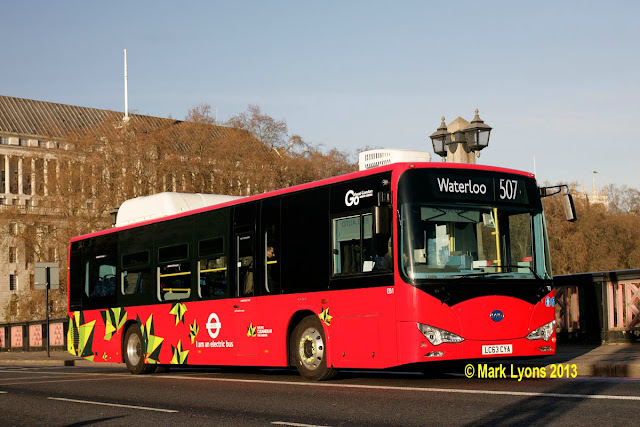 These are Chinese built BYD single-decks and are now operated by London General on the Red Arrow routes 507 and 521 that service some of the central area main line railway stations. Details can now be found here