A Times of Malta report

The technical reports into the fires on Arriva’s bendy buses ruled out arson, Transport Minister Joe Mizzi said recently (Wednesday 11th December 2013).
Speaking on the One TV breakfast show, the minister said he was awaiting clearance from the Attorney General to publish parts of the reports.
However, Arriva clarified that the report the minister referred to was a result of the magisterial enquiry relating to the fire on one bus in Marsa and did not investigate the subsequent small fires on other vehicles.
The minister said the bendy buses would not return to the roads for reasons of safety and because they had contributed to traffic congestion.
He said that Transport Malta would be introducing measures to further ease traffic congestion, including better traffic management and improved infrastructure.
One major project would involve the rebuilding of the Addolorata Cemetery junction in Marsa.
In a reaction, Arriva said the Transport Malta fire investigators report stated that ‘the possibility of intentional arson cannot be ruled out’.
The other buses and the independent inquiry, commissioned by the Transport Minister, claimed "one cannot totally ignore the possibility that the vehicle took fire from something external," Arriva said.
It said this supported the findings of an independent fire investigator it commission which listed "arson or sabotage" as a possible cause of the incidents.
“Arriva Malta maintains the position that these vehicles are safe to return to service and, while there may be a desire by the government to remove them in relation to traffic management, they remain contractually compliant vehicles,” it said. 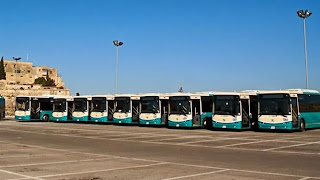 The Transport Ministry and Arriva denied reports that the public transport company “will pull out of Malta.”
It was reported that Arriva could leave the island as early as next March and that the government plans to nationalise the company.
But in reply, a spokesman for Arriva said: “We don’t comment on speculation, negotiations with the government are ongoing.”
On the other hand the Transport Ministry said that discussions between the government and Arriva are ongoing and are at a “very delicate stage.”
The ministry said that these discussions are not yet concluded and it is therefore not prudent to comment on them. “The ministry is aware that this is an issue of national concern but the most important point is that both sides remain focused and do not rush to take any decisions of national importance.”
Arriva and the government are discussing new routes proposed by the government however, according to sources, talks have been difficult. Reportedly, Arriva was also hinting it could leave the island for good unless it gets more subsidies from the government. According to unconfirmed reports, the public transport company was registering losses of around €35 million every year.