Electric buses which their developers say can run all day are set to begin service.
A fleet of eight new electric vehicles will operate along a busy route in Milton Keynes from late January.
The buses can run for longer by virtue of a wireless booster charge they receive at the start and end of the route from plates in the road.
The buses are the first of their kind to operate in the UK. 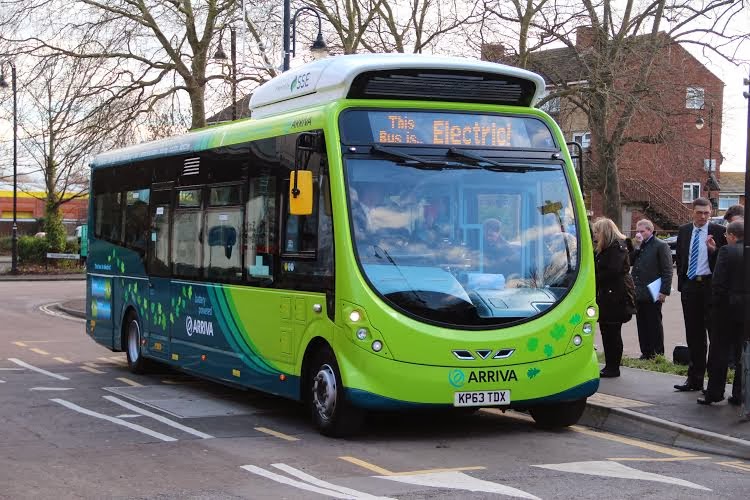 Inductive charging
The fleet will run on the Number 7 route, which covers 25km (15 miles) between the Milton Keynes suburbs of Wolverton and Bletchley and carries an estimated 800,000 passengers a year.
After a night charging at the depot, the buses will receive booster charges throughout the day at the start and end of the route.
There, the bus parks over plates buried in the road. The driver then lowers receiver plates on the bottom of the bus to within 4cm of the road surface and the bus is charged for around 10 minutes before resuming service.
The system uses a process called inductive charging. Electricity passes through wire coils in the road plates, generating a magnetic field. This field induces a voltage across coils in the bus plates and the vehicle's batteries are charged.

The new vehicles have been built by UK bus manufacturer Wrightbus and will operate as part of a five-year trial programme led by the European division of Japanese company Mitsui and UK engineering group Arup.
"Electric buses have huge potential and we're exploring how they can help us take better care of the environment without compromising passenger service," said John Bint of Milton Keynes Council.
"With the help of the project collaborators, we'll be monitoring the buses closely over the next five years."
Mr Bint told BBC News that if the buses proved a success, the plan was to roll out the system to all bus routes in the town.
John Miles, an Arup consultant and engineering research professor at Cambridge University, said: "These electric buses will be expected to do everything a diesel bus does.
"They will be operating on a demanding urban route, and that's all part of the trial's aim - to prove that electric buses can be tough as well as green."
Similar systems are already being used in Turin and Genoa in Italy, Utrecht in the Netherlands and in Mannheim in Germany.
Last year, South Korea switched on a 12km (7.5-mile) road which can recharge electric vehicles as they drive over it, without the need for vehicles to stop at all. Two public buses are using the Online Electric Vehicle system, or OLEV, in the South Korean city of Gumi.
The technology means the vehicles can be fitted with smaller, lighter batteries, reducing the amount of power required to drive them.