·         LU to run as many services as possible, but there will be disruption and customers urged to check before they travel at tfl.gov.uk
·         Extra bus and river services, to help Londoners get around (see below)
·         Licensed and trained TfL Ambassadors will help to keep Tube stations open and provide travel information and advice to customers
·         LU reaffirms commitment that all Tube stations will remain staffed and controlled while services are running, with more staff visible and available to help customers in ticket halls and on platforms
·         LU commits to delivering change with no compulsory redundancies

The Mayor and Transport for London (TfL) today set out a range of measures to help keep London moving and open for business next week, should the strikes threatened by the leaderships of the RMT and TSSA unions on London Underground (LU) go ahead.

LU is consulting with trade unions and staff over its vision for the future of the Tube, which includes a new 24-hour ‘Night Tube’ service at weekends and more staff visible and available in public areas of Tube stations to help customers buy the right ticket, plan their journeys and to keep them safe and secure.

Following poorly-received ballots for industrial action, which saw around just 30 per cent of RMT and TSSA members balloted voting for strike action, and around 70 per cent either not voting or voting no, the union leaderships have nonetheless instructed their members to carry out four days of strike action in February.

The leaderships of the RMT and TSSA unions continue to threaten Londoners with strike action despite a series of commitments made to Tube customers and staff by LU Managing Director, Mike Brown MVO including:
·         Every Tube station will be visibly staffed and controlled by LU staff during operating hours;
·         There will be a job for everyone who wants to continue to be part of our organisation and who is ready to be flexible;
·         Any operational changes will be done without compulsory redundancies where we can collaborate to make change happen.

LU Managing Director, Mike Brown MVO said: “Our customers and staff are at the very centre of our plans for London Underground.  All Tube stations will remain staffed at all times when services are operating, and we’ll be introducing a 24-hour service at weekends during 2015.  In future, there will be more staff in ticket halls and on platforms to help customers buy the right ticket, plan their journeys and to keep them safe and secure.

“We’re committed to implement these changes without compulsory redundancies and there’ll be a job for everyone at LU who wants to work for us and be flexible.

“I urge the leaderships of the RMT and TSSA to work with us to help shape the future of the Tube, rather than threatening Londoners with unnecessary disruption.  All a strike will achieve is lose those who take part four days’ pay.  Should the strike go ahead, we’ll do all we can to keep our customers informed and ensure we keep London moving and open for business.”

A 24-hour strike has also been called by the leadership of the ASLEF union at London Tramlink.  The dispute is between the operator of Tramlink, First, and the ASLEF union over the dismissal of two drivers.  Should the strike go ahead, it is likely to cause disruption to Tramlink services on Wednesday 5 February.

Those public transport workers who are on duty during the strike will be doing their very best to keep London moving and open for business.  TfL asked customers for their patience during what may be difficult journeys.

TfL Ambassadors and volunteers will also be on hand to provide customers with travel information and advice on the ground.

TfL urged all customers to plan ahead and to check before they travel at tfl.gov.uk and by following @TfLTravelAlerts, @TfLTrafficNews and @TfLBusAlerts on Twitter.

DLR
·         A normal service will operate. Some stations where there is an interchange with London Underground may be affected.

Buses
·         London buses operate around 700 routes and services are being boosted with over a hundred extra buses on key routes;

(Focus comment: This is probably the most significant element for some, as extra capacity will come from companies not usually associated with Daily bus routes within the contracted TfL network. Included is Ensignbus who intend to provide a selection of interesting vehicles from their vast and varied fleet. They will be rallying around to ease the burden placed upon the bus route network)
·         TfL Ambassadors and volunteers are being deployed to bus stations and hubs to provide customers with travel information and advice on the ground.

London Overground
·         A normal service will operate. Some stations where there is an interchange with London Underground may be affected.

Tramlink
·         Tramlink services are likely to be disrupted on Wednesday 5 February due to strike action called by the leadership of ASLEF;
·         Customers are advised to check before travelling at tfl.gov.uk and @tramslondon and to seek alternative routes, where possible.

·         Better customer service:  The trend of ticket sales away from ticket offices has surged over recent years and today less than three per cent of all Tube journeys involve a visit to a ticket office.  In future, therefore, rather than being remote from customers behind closed doors or glass windows, Tube station staff will be based in ticket halls, on gate lines and on platforms, ready and available to give the best personal and face-to-face service to customers;
·         Improving reliability and capacity:  The huge Tube improvement programme underway will continue, with billions of pounds of investment to deliver more frequent, reliable and accessible services and enhanced stations, providing greater capacity to tackle increasing numbers of customers.  It also includes a continued rigorous focus on improving customer journeys and meeting the Mayor's commitment of reducing delays by a further 30 per cent by 2015, when compared to 2011 reliability levels.  Across the Tube network, delays to customers’ journeys have been reduced by 37 per cent since 2008/09 and 53 per cent since 2003.
·         Night Tube:  From 2015, weekend services will run through the night on core parts of the system – initially comprised of services on the Piccadilly, Victoria, Central, Jubilee and Northern lines.  This network, which will be expanded to include other lines in subsequent years, will dovetail with existing 24-hour and Night Bus services to give passengers an extensive and integrated service throughout the night.

The Mayor of London Boris Johnson recently announced that 2014 will be the "Year of the Bus" in London, during which there will be a number of celebratory events featuring buses ancient and modern. Further detail can now be viewed here 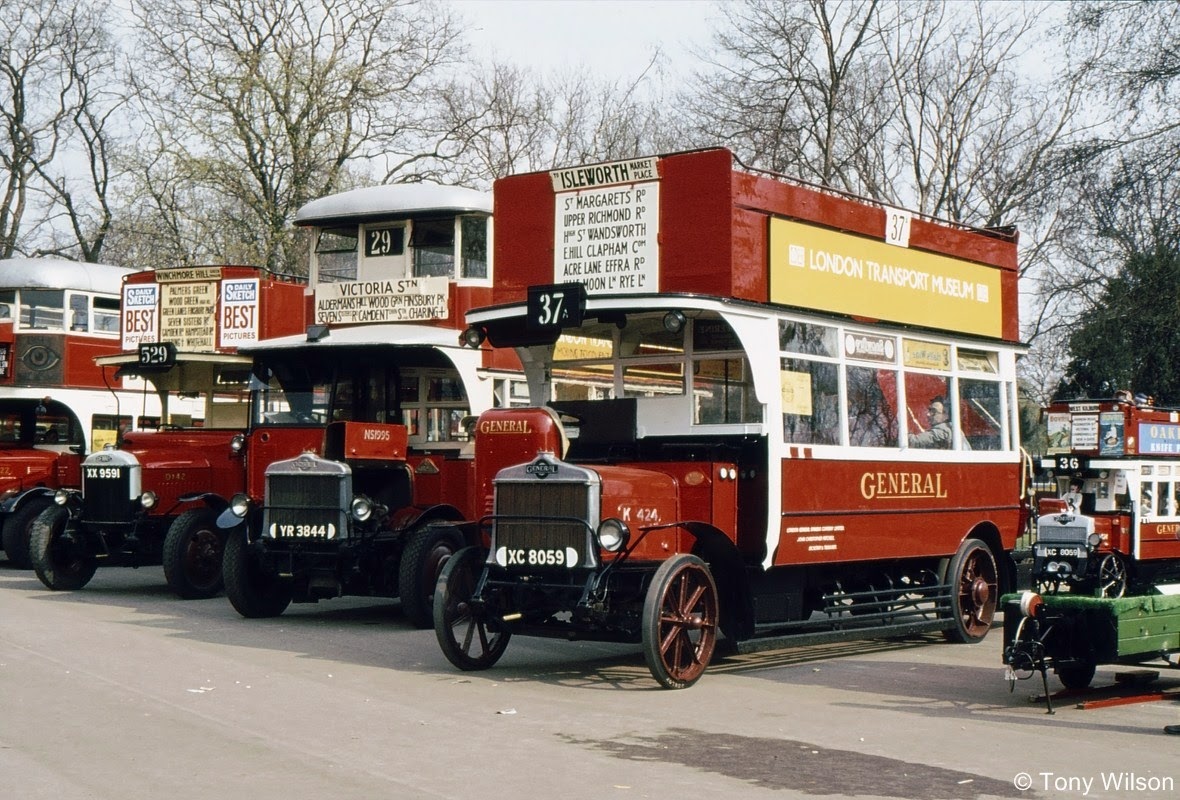 A fine line-up of early motor buses for London 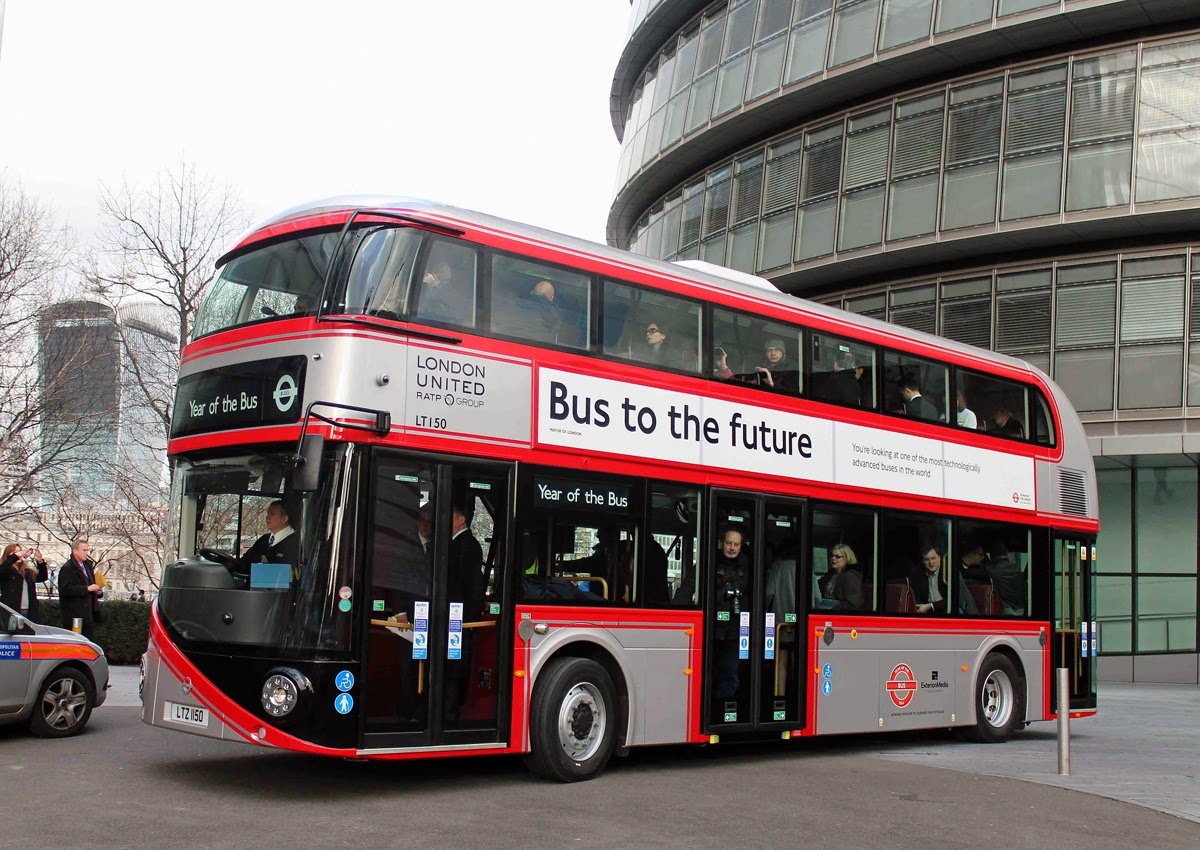 This image of New Routemaster LT 150 supplied by Graham Smith