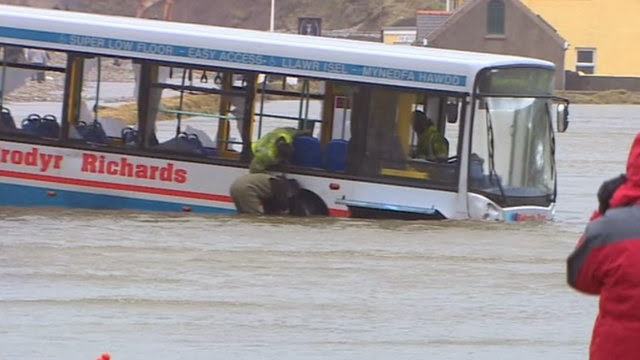 Council workers clear the road so that the stranded bus can be moved
Ten people were rescued after a bus was hit by a large wave in Newgale during high winds and high tides along the Welsh coast on Saturday night.
Meanwhile, Ceredigion Council is assessing the cost of damage to Aberystwyth promenade after huge waves were driven onto the seafront for the second time this year.
Coastguards, council officers and police ensured everyone remained safe.

At Newgale, Milford Haven Coastguard was contacted just after 19:00 GMT with reports that the bus was stuck on the front, after it was hit by a large wave and became surrounded by flood water.
Coastguard, police, fire and ambulance crews were sent to the scene and an RAF helicopter from Chivenor in Devon was called, but was stood down once the passengers were helped to safety.
There were no reported injuries.
The council said they had been working to clear the rubble on the road but the A487 will remain closed until further notice. The bus was the responsibility of the owner to move, a spokesman said.
In Aberystwyth, repairs to the town's sea wall damaged by January's storms were completed on Friday.

The bus became engulfed with flood water at Newgale in Pembrokeshire

Workers clearing the road by the bus stranded in Newgale

The driver of a bus hit by a wave and knocked off a coastal road in Pembrokeshire has denied ignoring warnings to stop and turn around.
Police are investigating the incident at Newgale during high tides and strong winds on Saturday which left 10 people needing to be rescued.
Council workers said they advised the bus driver not to continue and tried to flag him down when he did.
Driver Jon Ashman claimed he had been told the road was "passable with care".


He told BBC Wales workers had not advised him to avoid the A487 in Newgale, which has been closed since high tides on Saturday and will remain so for the next few days.
He said: "I was told it was passable with care. There's a fair bit of water and a few stones on the road but nothing massive until we were literally hit by a wave which picked the front of the bus up and shunted it off the road."
Mr Ashman said they were hit by three waves in total, adding: "It's not something I want to go through in the near future."
He said of council claims that staff tried to attract his attention to stop him driving along the road once he began: "I don't believe that to be the case. I didn't see anyone there.
"Ultimately I'm not going to put myself or passengers at risk. It's not in my best interest. I'm paid to get people from A to B safely and that's what I endeavour to do."

Council workers cleared the road near the stranded bus on Sunday

None of the 10 passengers on board were injured according to police
Pembrokeshire council said the road was in the process of being closed at the time of the incident.
In a statement, the council said workers had started to direct traffic to use an alternative safe route avoiding the Newgale road.
The bus driver had been told of the situation, according to the council.
The statement continued: "The driver chose to continue his journey along the main road.
"A council operative followed the bus in his own car equipped with a flashing orange beacon on the roof.
"He was also flashing his headlights in an attempt to stop the bus but was unsuccessful.
"A member of the public on the bridge at the bottom of Pen-y-Cwm Hill also tried to flag the bus down with a torch but he too was unsuccessful.
"The council has provided information to the police in relation to their investigation into the incident."
Dyfed-Powys Police said officers were called to the Newgale incident just after 19:00 GMT.
"Weather conditions at the scene were severe and additional support was provided by the coastguard and Mid and West Wales Fire and Rescue Service," the force said in a statement.
"Due to the location of the vehicle and the flooding at the scene, passengers were assisted from the vehicle to an awaiting replacement bus. No-one was injured."

High tides lashed Plymouth's Hoe seafront and the nearby Barbican
Repairs on a section of storm-damaged coastal railway line in Devon have been halted because of safety concerns.
Network Rail said it had pulled all repair staff away from working on a 50m (165ft) section of track at Dawlish.
A section of the town's sea wall was later reported to have washed away.
Elsewhere in the county, trees fell across Devon, Kingsbridge suffered flooding on Tuesday night, and a Plymouth seafront restaurant was closed by police because of safety concerns.
The withdrawal of railway repair staff in Dawlish was as the result of the first black safety warning Network Rail has ever issued in the South West, it said.
'Tonnes of ballast' The infrastructure owner said the affected area of track was unsafe after supporting ballast was washed away this week, but it had stopped work on Tuesday afternoon because of storms due to hit the coast.
The line at Dawlish, which passes along the town's sea wall, is vulnerable to high waves.
Julian Burnell, from Network Rail, estimated "hundreds of tonnes" of ballast had been dislodged from under tracks after they had "taken a real pounding from the sea".
He added that the town's station had also been damaged by the weather.
He said it was hoped trains would run again by Friday at the earliest, but this might be affected by the sea wall washing away.
Dawlish is between Exeter and Newton Abbot on the main railway line through the county.
The section of line had already been closed off on Monday because of "poor weather conditions", train operator First Great Western said.

Network Rail said up to 50m of track was unsafe after ballast underneath was washed away
It tweeted that replacement road transport was being used to ferry passengers between the two stations.
Sleeper services between London Paddington and Penzance have also been cancelled until further notice.
It and rival operator CrossCountry were currently accepting both firms' tickets between Bristol and Penzance, it added.
The Met Office has issued a yellow alert for high winds in the South West until 23:00 GMT on Wednesday.
Fallen trees

Something photographically different but still transport related, has been provided by Colin Sellers and can now be viewed here but make sure you highlight the words "see here". This is a large prominent mural on the side of a building adjacent to the Chesterfield coach station, and one can only surmise as to what the finished article will look like. As to what the subject matter is, maybe the fact that there is a certain local transport centenary to celebrate might provide the answer. Of course we could be quite wrong, but all will be revealed in time and hopefully through Colin's lens.