A visit by the Secretary of State for Transport has marked the start of major work on the Chiltern Railways Oxford to London Marylebone project, a landmark new rail route that will be the first to connect a major British city with London in over 100 years. It is also the first phase of works on the western section of the East West Rail scheme that will reinstate the railway for passenger and freight services through to Milton Keynes and Bedford. 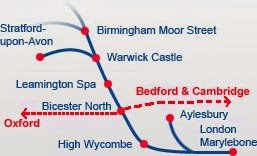 The Rt Hon Patrick McLoughlin officially marked the start of works on the project at a site just south of Bicester North station. At this key location, three quarters of a mile of new track will be laid allowing Chiltern trains from Oxford to join the mainline and run to London Marylebone.
Once completed, the project will provide Oxfordshire with a new rail route to London, improve services between Bicester and Oxford, and re-establish a direct rail link between Oxford and High Wycombe. The new line between Oxford and London Marylebone is planned to launch from Oxford Parkway in Summer 2015 and from Oxford city centre in Spring 2016.
The upgrade of the Oxford to Bicester line facilitates the new Chiltern Railways service between Oxford and London.
The Secretary of State’s visit follows a key milestone on the mainline last weekend when major signalling equipment was installed for the new Bicester South junction where Oxford trains will join Chiltern’s London to Birmingham route.
Rob Brighouse, Managing Director of Chiltern Railways said: “Chiltern Railways has invested £130 million in our landmark Oxford to London Marylebone project that will deliver significant economic benefits for those living and working along the route and transform travel for people in Oxfordshire.
"Towns and villages to the north of Oxford will gain, especially from improved rail access and a new parkway station for the region. In addition, the fast growing town of Bicester will enjoy an additional link to the capital adjacent to Bicester Village Shopping Centre.”
Transport Secretary Patrick McLoughlin said: "Our railways are a success story and we are building on that success through record levels of investment. The start of work on this new route is proof our investment is paying off, with improved connections boosting services across the region for the benefit of passengers and local businesses."
Work on this project is taking place through a partnership between Network Rail and Chiltern Railways who are managing delivery of the project through the Bicester to Oxford Collaboration. Chiltern Railways has invested £130 million to build the line.

Dyan Crowther, Route Managing Director for Network Rail, said: “The new Oxford to London line and wider East West rail scheme will deliver significant economic, social and environmental benefits to Oxfordshire, Buckinghamshire, Bedfordshire and beyond. The start of work to build the new railway is an important first step in delivering these improvements which will benefit millions of passengers and many local economies every year.