HIGH & LOW ON THE CAMBRIDGE BUSWAY 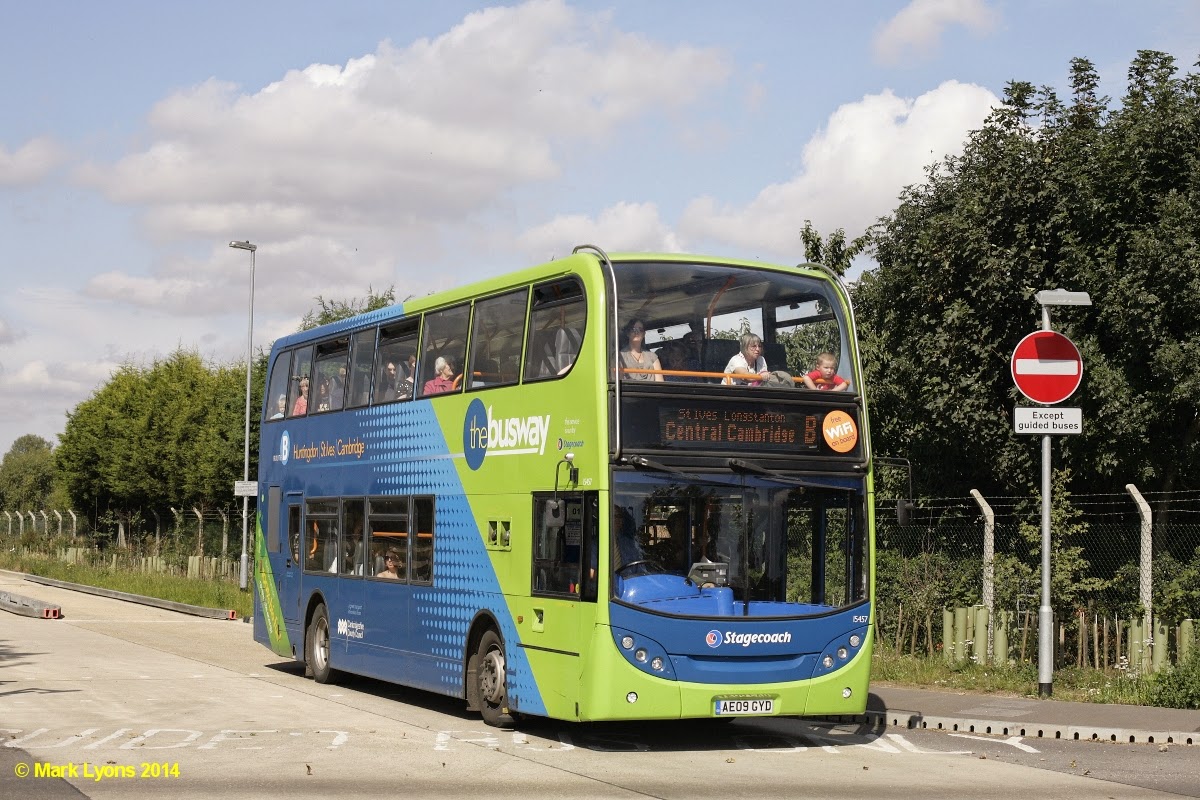 More guided busway services are being launched in response to soaring demand.
Operator Stagecoach yesterday said it would increase the frequency of departures to every five minutes during peak times, in the hope this will relieve overcrowding and stop passengers being left waiting by buses which are too full to stop.
The additional journeys run between St Ives and central Cambridge between 7am and 9am on weekdays, and in the opposite direction between 4pm and 6pm.
This is an improvement on the current service frequency of every seven or eight minutes.
Stagecoach pledged to run more double-decker buses between St Ives and central Cambridge during peak periods, adding more seats, and also announced a number of new routes linked into the busway. 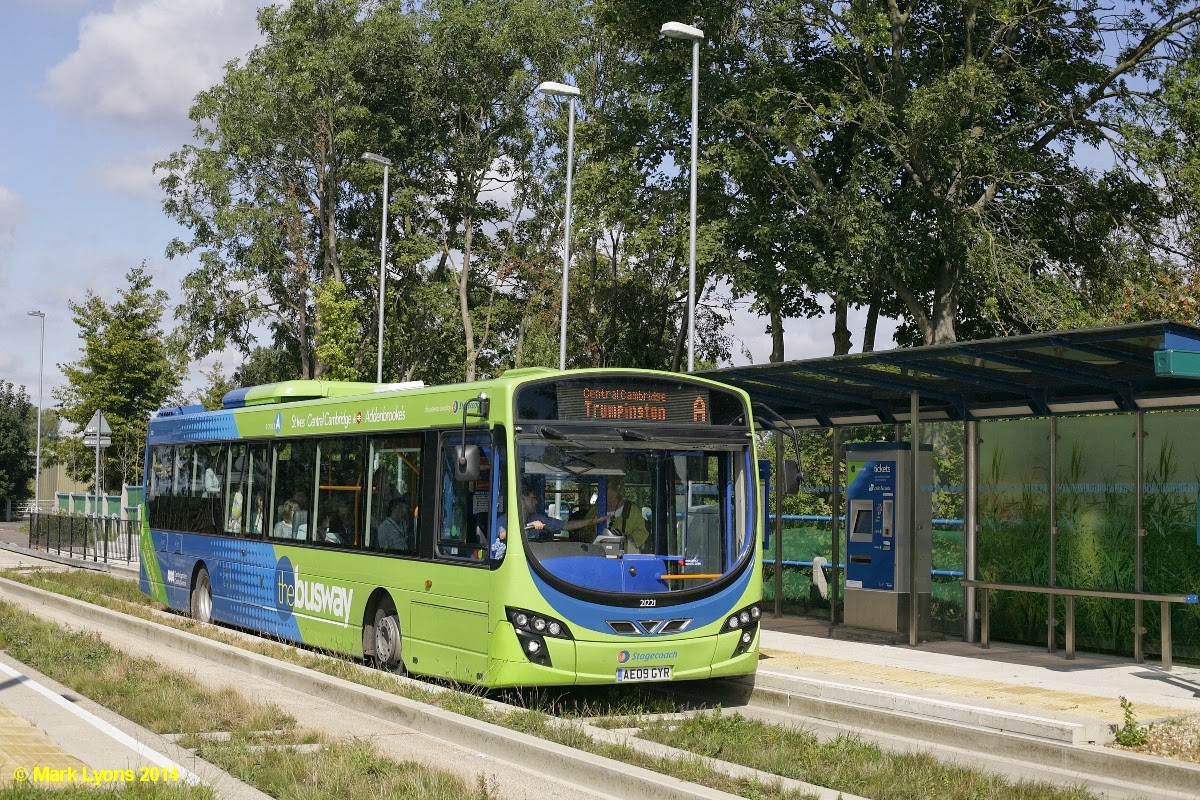 There will be new buses serving Brampton and Godmanchester at peak times, plus services which offer a more direct route by cutting out the Oxmoor estate in Huntingdon.
Andy Campbell, Stagecoach Cambridgeshire’s managing director, said he hoped the new services would prove popular.
He said: “We have got demand at peak times that we are struggling to cope with so we thought it was necessary to put some additional resource in.
“At the same, as we have experimented with Ramsey and Chatteris previously, and we have had a bit of interest on those journeys, we are going to try it from Brampton and Godmanchester to see if that works.”
Mr Campbell said the additional departures were a reflection of the success of the busway, which opened in August 2011.
He said: “If you had said we would be taking three million passengers a year before they build any new houses, I would have been very sceptical, so I’m pleasantly surprised.
“I would hope to be able to get more buses at some point to increase the frequency again, which we will have to do when Chesterton station opens and with work due to start at Northstowe.” 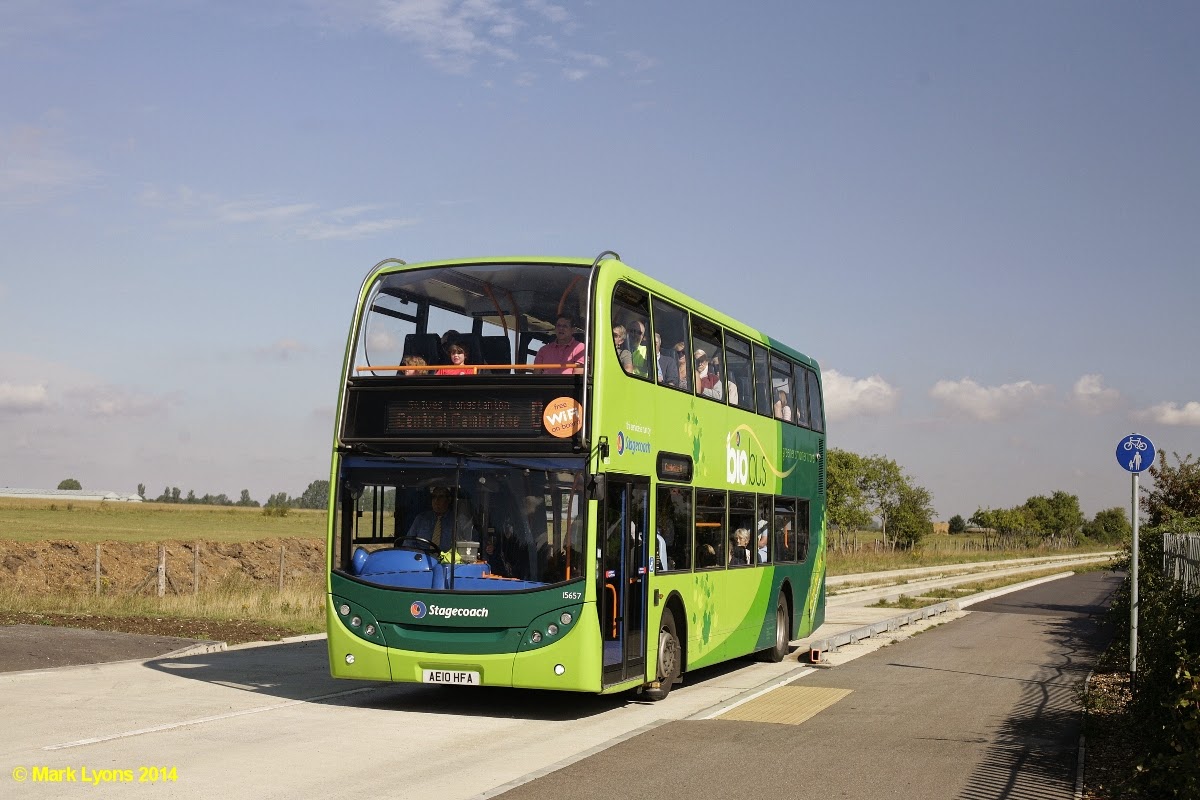 Serious faults with the guided busway which potentially affect every beam laid and could cost £20 million to repair have been discovered – prompting council bosses to question the long-term future of the track.
A report published by Cambridgeshire County Council today lists a plethora of alleged defects, some of which could have “significant long-term impacts”, and threatens fresh legal action against builder BAM Nuttall.
The most serious problem is that many of the bearings which lie between the busway beams and their foundations have moved out of place, causing the beam to drop and a step to appear in the track.
Checks on several sections of the £152 million track between Cambridge and St Ives have found faults in all of them, with the proportion of bearings which are displaced as high as 70 per cent in some areas.
A report to cabinet members from executive transport director Graham Hughes said: “It can therefore be assumed that all the bearings are at risk of moving out from under the beams.”
This fault has already caused the imposition of a temporary speed limit at Histon and emergency overnight repairs, and has been exacerbated in some locations by further faults with the beams and foundations themselves.
These have led to cracks in the middle of the beams “that are larger than normally permissible”.
Mr Hughes said: “The impact of these on the serviceability and longevity of the guideway is currently being considered.”
BAM Nuttall replaced bearings on the first two occasions, Mr Hughes said, but have subsequently claimed this amounted to “routine maintenance”. Mr Hughes said this claim had “no basis in fact”.
Other faults focus on the area around Bridge Road in Impington, where one section of track was built with thinner beams originally designed for use on bridges.
The council said BAM Nuttall had done this to carry the track over buried services, but investigation has shown there were no pipes there.
BAM Nuttall used concrete blocks to bring the thinner beams up to the level of adjacent track, but one of these failed because it had not been reinforced or bedded on mortar.
The council had to fix this but, when it did, it discovered the foundations in this location were sitting permanently in water and that the drainage system had been constructed to channel water into the foundations – rather than away.
Mr Hughes said: “As BAM Nuttall have declined to address this defect, a revised drainage design is being prepared.”
Another defect affects several sections between Swavesey and Cambridge totalling nearly two miles in length, where the council says BAM Nuttall relaxed specifications for foundations even though they were being laid on clay which shrunk during drought and swelled in wet periods.
Surveys have been carried out but only one area, in Impington, has shown “significant movement”, Mr Hughes said.
Other faults include foundations sitting in water between Long Road and Addenbrooke’s Hospital, and joints between beams which are too narrow, causing damage to the kerb.
Cllr Mike Mason, who represents Cottenham, Histon and Impington, said the council should bear some of the blame.
He said: “The council was told at the public inquiry about poor drainage and high groundwater levels on the route, and then they went and laid concrete beams weighing 30 tonnes each on it.
“I’m not at all surprised that this construction is cracking up. What is really disappointing is that they’ve kept it under wraps for all this time.
“The defects for the county council should have jumped on these defects at the moment they started laying beams.”
But Cllr Martin Curtis, the council leader, said it had been BAM Nuttall’s responsibility to build the track correctly.
He said: “It is right and proper that any faults which are the responsibility of BAM Nuttall are put right at no cost to Cambridgeshire taxpayers and, if professional experts find unexpected or additional repair or maintenance work is necessary, we shall seek to recover the full cost of that work from BAM – even if that means taking further legal action.”
Legal action between the council and BAM Nuttall over delays and faults which plagued construction was settled last year, leaving the project £36 million over budget.
Liberal Democrat spokeswoman Cllr Susan van de Ven said: “It is vital that a thorough investigation is carried out as a matter of urgency to determine the extent and seriousness of the faults.
“BAM Nuttall must be held to account to make any repairs to ensure the safety of passengers and the cost must rest with BAM Nuttall and not impact on the taxpayer.”
BAM Nuttall said it would consider the report and respond in due course.


SEE  ALSO THE LATEST ON THE FOCUS FLICKR SITE

The Focus Transport team have been out and about locally in Chesterfield and the surroundings. However, Colin Sellers has been further afield with his 'Box Brownie' and focused his attention on route 170 (Chesterfield & Bakewell). Two interesting vehicles particularly caught his eye in the shape of the company's sole double-decker (a Dennis Trident/ALX400) and a 'new' single-decker (VDL/Wright) currently on hire. 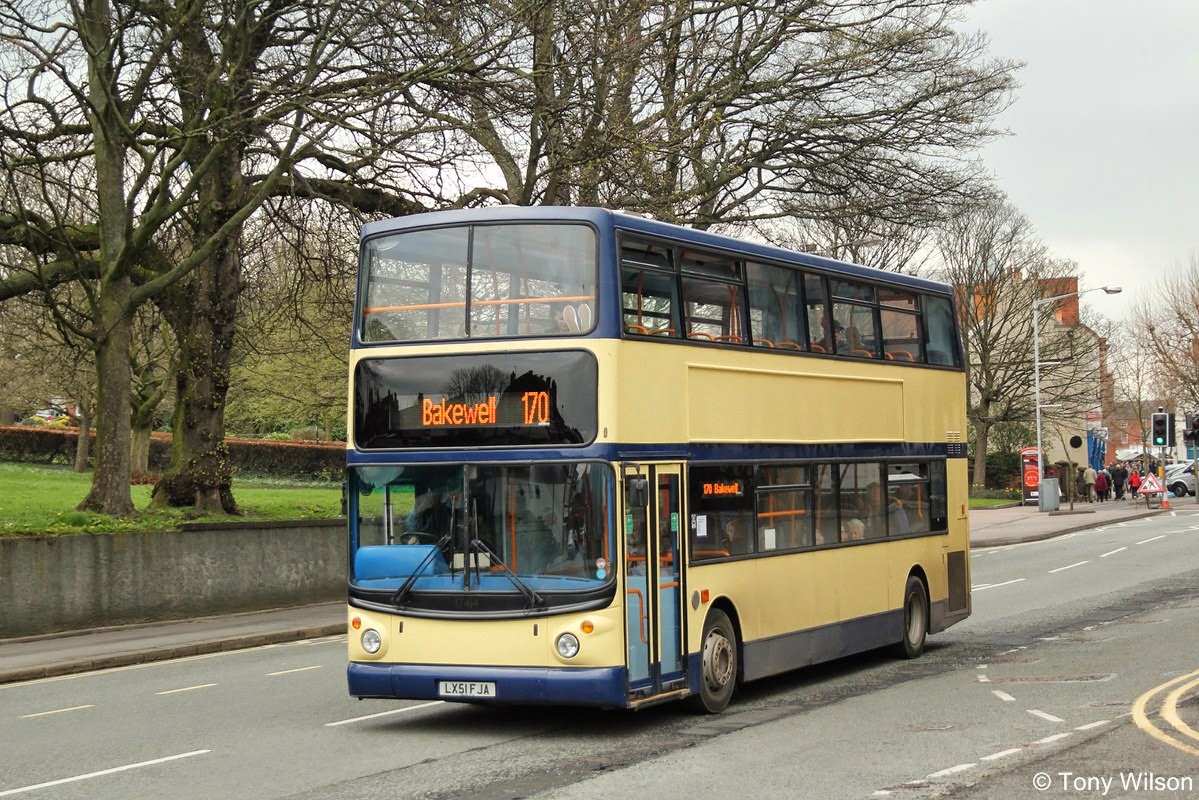 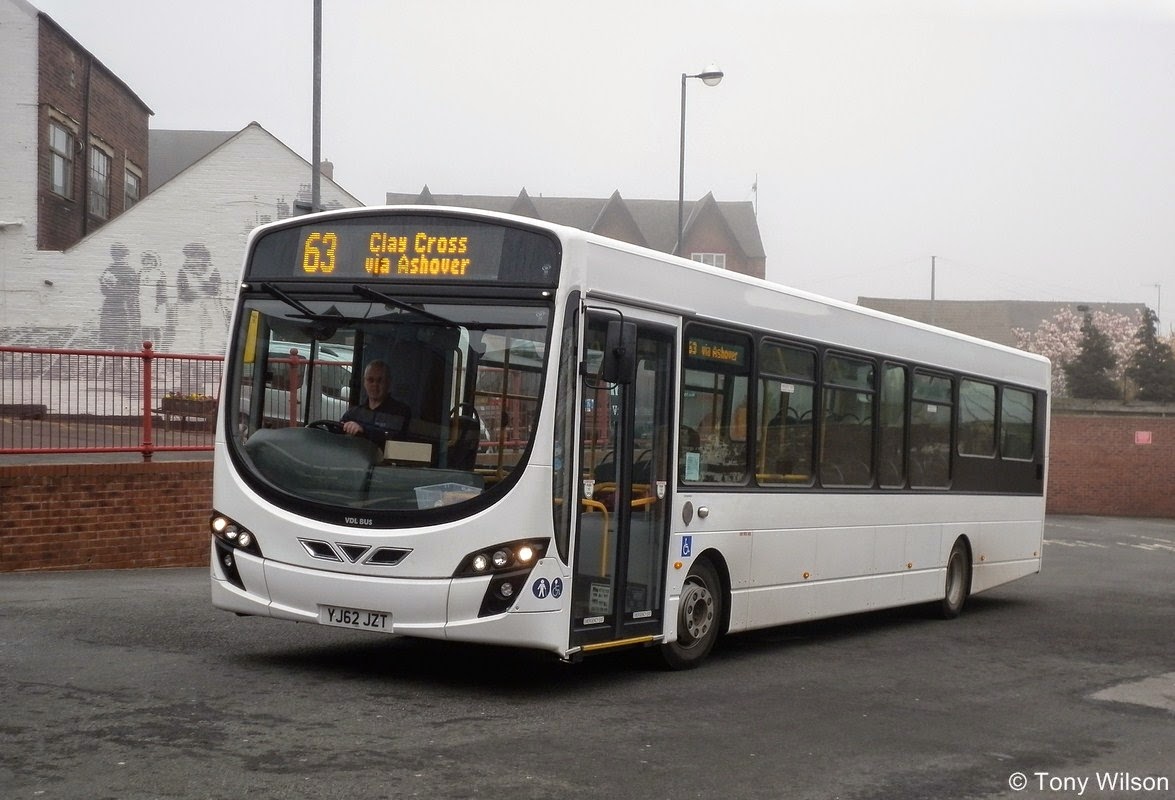 Both vehicles plus others can now be viewed here