Network Rail has said it expects to be fined about £70m - a record figure - for delays suffered by passengers.
The Office of Rail Regulation (ORR) is expected to impose the penalty later this year. 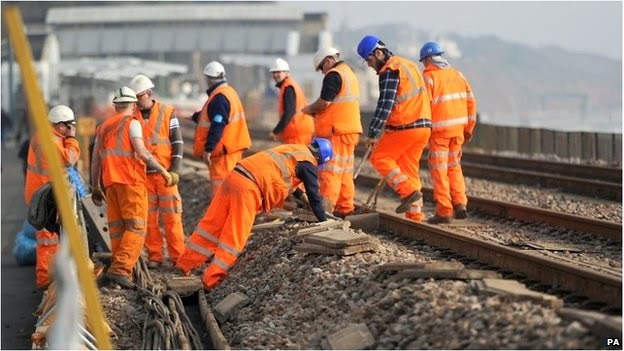 Network Rail, which maintains Britain's tracks and rail infrastructure, said it was disappointed passengers had not seen the punctuality it had promised.
It said work was continuing to make the network more reliable - but congestion and extreme weather had caused delays.
For Network Rail to meet the ORR's punctuality target, 92.5% of trains must arrive "on time" - which is defined as within five minutes of the planned time for local services and 10 minutes for long-distance trains.

The company was told last year that it could face a fine of up to £75m if it failed to hit this target. A Network Rail spokeswoman said a fine of about £70m was now expected.
The BBC understands the fine could be lower if the ORR accepts that uncontrollable factors such as weather played a significant part in delays.
The previous biggest fine was £14m, imposed in February 2008 after engineering work overran during the preceding Christmas and New Year period.
'More seats'
The fine would relate to Network Rail's performance over a five-year period which ends on Monday.
The company spokeswoman told the BBC the full punctuality statistics for the period were not yet available, but the final figure was likely to be "just short of 90%".
She said missing the target was "disappointing" but the company planned to "restore record levels of performance" with £38bn of investment in the next five-year period.

The company would "provide more trains, more seats and quicker, greener journeys," she added.
An ORR spokeswoman said its assessment of Network Rail's performance for 2009-14 would not be complete until June.
ORR chief executive Richard Price said Network Rail had developed a "comprehensive" improvement plan to "achieve a better railway for Britain".
'Failed to deliver'
"Now it is time for the company, in collaboration with the industry, to make it happen," he said.
"ORR will be scrutinising progress closely to ensure plans for extra capacity, expanding and electrifying the railway, improving train punctuality, enhancing the resilience of our rail network to severe weather, closing level crossings and increasing workforce safety are effectively delivered."
David Sidebottom, acting chief executive of Passenger Focus, said passengers would be disappointed that Network Rail had "failed to deliver on its top priority - performance".
"It is essential that it gets a grip of the situation and delivers sustainable improvements," he said.

Network Rail is funded by a mixture of government grants and money from train companies which use the network.