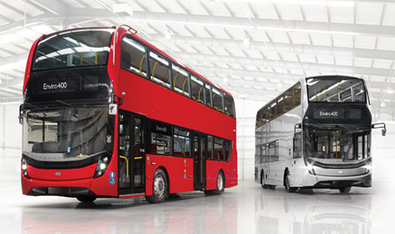 
Welcome to the Future
Innovation with Style is the design and engineering philosophy that has been pursued relentlessly by Alexander Dennis Limited (ADL) since the company’s inception and the all-new Enviro400 is no exception to that rule. It is a bus that raises the bar for the industry and is an inspired successor to Britain’s best-selling double deck over the past decade.
Enviro400 has been meticulously thought-out and built as part of a unique partnership involving ADL’s design and engineering teams, customers from across the industry and suppliers with unique, specialist skills.
This visionary, collective approach has resulted in a bus designed by the industry …… for the industry.
It is lighter, more fuel efficient, quieter, environment-friendly and has increased seating capacity. It is class-leading in a vast range of ways, incorporating 200 improvements that introduce a wealth of benefits for operators, drivers and passengers.
ADL’s major model change introduces a radical new bus that exceeds all expectations.
Innovation and Style
Innovation and Style are omnipresent in the Enviro400 and are the result of a remarkable study of every fault reported on every ADL two-axle double deck since 2006.
More than 70 operators were involved in a three-year customer engagement initiative that featured at the heart of the vehicle’s development programme. As a result the new Enviro400 incorporates an impressive list of improvements.
* It is 400 kilograms lighter.
* It is more fuel efficient.
* It has increased seating capacity – up to seven more in the full-length model.
* It is powered by a robust 6.7 litre Euro6 Cummins engine that operators regard as reliable and capable of optimising performance week-after-week, year-after-year.
* It has a radical, new heating and ventilation system that ensures a constant temperature throughout the bus.
* It introduces ADL’s unique, patented, quick-release glass system, which reduces window replacement from three hours to three minutes.
Stylish New Look
The Enviro400 has a stylish new look with a modern curved shape that flows from back to front, descending onto the distinctive “hips” at the rear of the vehicle, while the interior, both upstairs and downstairs, has been designed to ensure that shapes, colours and materials blend together, all of which has been achieved without compromising leg room or seat sizes. Yet, despite all of these demands there is one more seat on a standard London bus, five more on a hybrid variant and seven more on a full-length diesel model.
Access and Maintenance
Access and ease of maintenance is also much-improved throughout the new Enviro400. The tail-gate to the engine compartment at the rear of the bus opens higher, while the side doors to the power unit open wider and, if necessary, can be removed entirely.
Electrical and Wiring Systems
The electrical system is also all-new, based on a fully multiplexed design and is housed in one well arranged, easily reached distribution centre located in the upper deck.
Similarly, the wiring system is radically different with shorter, modular sections that can be changed and clipped back into place easily. The wiring has also been carefully chosen to maximise resistance to heat and corrosion, while the entire system is contained inside the body of the vehicle rather than being exposed to dirt, moisture or impact damage.
Likewise, there is improved access to the wiper motor and the fuel tank, which can be removed from inside the bus, and the destination display – now on a pivot mounting – can be reached effortlessly, making cleaning and maintenance far quicker.
A New Passenger Experience
Passengers will enjoy a whole new experience when they board
the Enviro400. They will be struck immediately by the light, airy and welcoming ambience of the interior, an environment enhanced by large windows and the gloss finish of the internal panels that flow seamlessly from the driver’s cab into the seating areas.
Every detail has been examined, debated and deliberated upon, such as the inclusion of the rear window which operators universally agreed was a “must have”.
Features ranging from door locks and seals to hand pole mountings and secure wiring looms have been re-examined and “reinvented”, all in pursuit of the industry’s Holy Grail, the rattle-proof bus.
“Square-case”
ADL’s revolutionary “square-case” has also been introduced in the Enviro400 range. This compact, square design takes up less space, is easier to use and is brightly lit, making it safer and more user-friendly, thanks to a continuous handrail running from top to bottom.
Heating and Ventilation
Heating and ventilation – one of the most contentious subjects in the bus industry – also makes a quantum leap in the new Enviro400.
ADL engineers have made profound changes. These are based on a new approach that incorporates a heating unit located in the lower saloon. This forces air to all corners of the bus quickly and efficiently, providing a constant temperature throughout.  When supplemented by an air chiller it can also contain the temperature to circa 17-18°C ensuring that passengers remain warm in the winter and cool in the summer months. 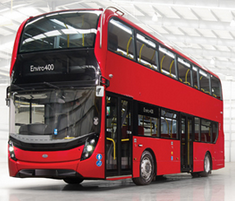 The Driving Force
Setting the pace with a stylish, modern bus that raises the bar in terms of fuel efficiency, reliability and reduced maintenance is a step into the future for operators and passengers – but what about the driver, the person who spends more time on a bus than any other?
The answer is that drivers too have played a vital part in the design and layout of the Enviro400, particularly in determining the size, shape and layout of the cab area.
Drivers’ representatives from across the country were an integral part of ADL’s customer engagement programme and contributed enormously to the creation of a cab that is designed for maximum comfort, safety, efficiency and ease of use.
The protection screen at the point of entry is no longer an adjunct to the design. It is an integral part of the whole approach being functional but blending impeccably with the surrounding area.
Spacious Cab
Inside, the cab area is spacious and distracting reflections are eliminated by the attention to detail, while visibility is further improved with a new wrap-around windscreen, improved sight lines to the front and sides, and well positioned mirrors. The switch-gear is all-new too, adopting the positive feedback buttons overwhelmingly favoured by drivers and operators, while the fully adjustable steering column and seat ensure that everything the driver needs is comfortably within reach.
Increasing technology often means that many bus cabs today are bedecked with screens, some vital and some optional, but often appearing disorganised. Working with operators and drivers the ADL team has designed an ingenious layout for screens that is practical, easily reached and unobtrusive.
Innovation with Style
From start to finish the new Enviro400 combines Innovation with Style ranging
from screens, seats and steering columns, right down to the inclusion of a handy, sizeable storage area for the driver’s odds and ends, and a well-positioned peg for his or her jacket. 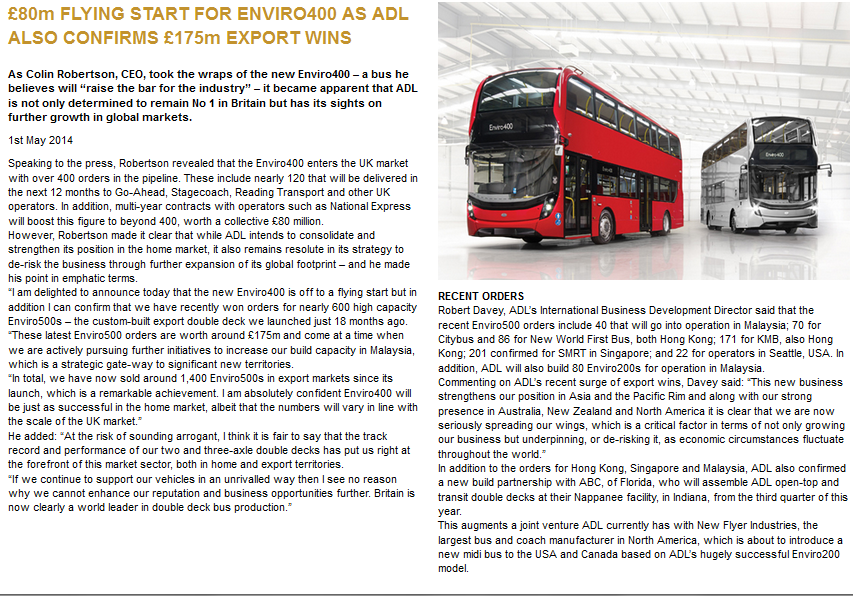 "A Rumble in the Jungle" 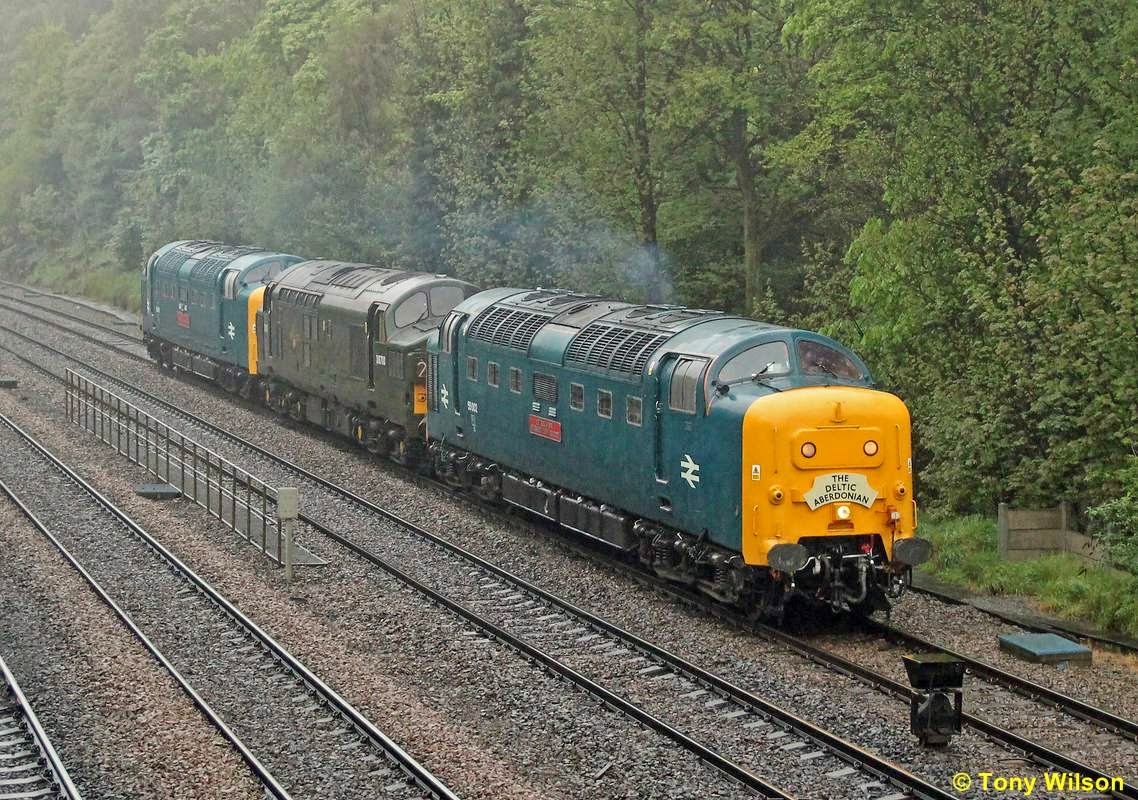 90-minutes spent in very murky conditions just north of Chesterfield railway station was worth all the discomfort, as illustrated by the selection of images now available here