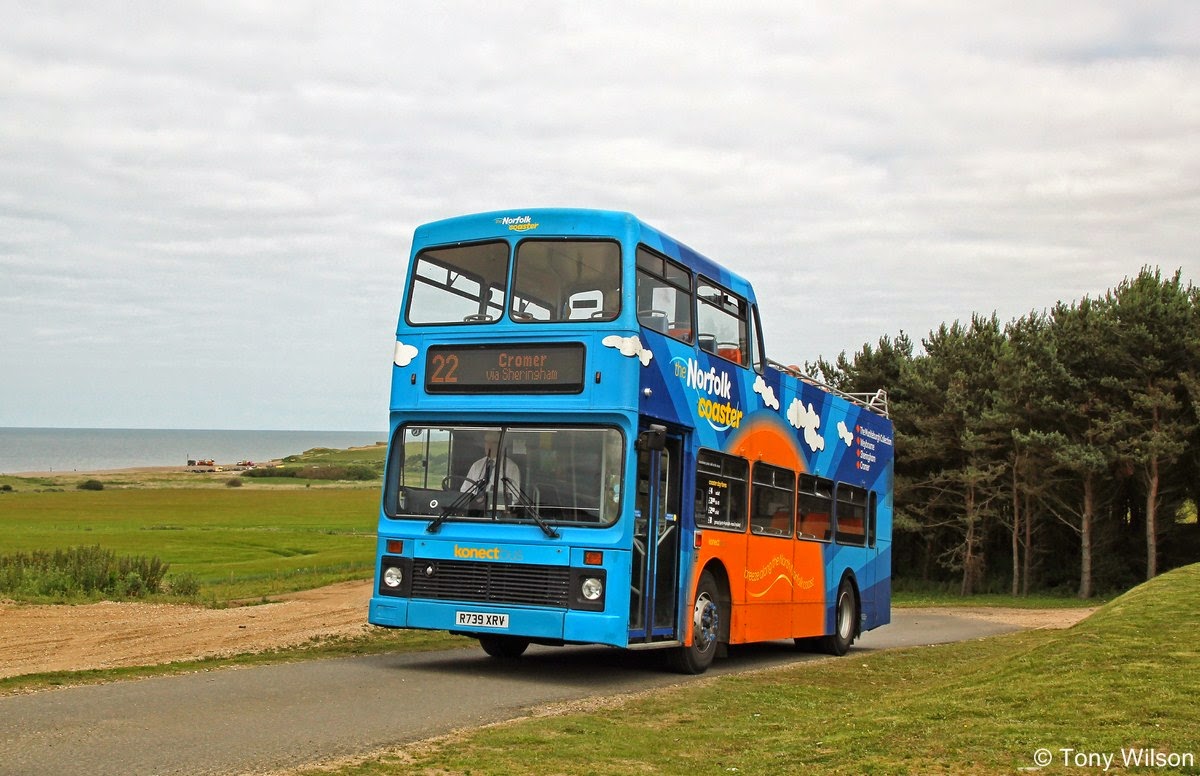 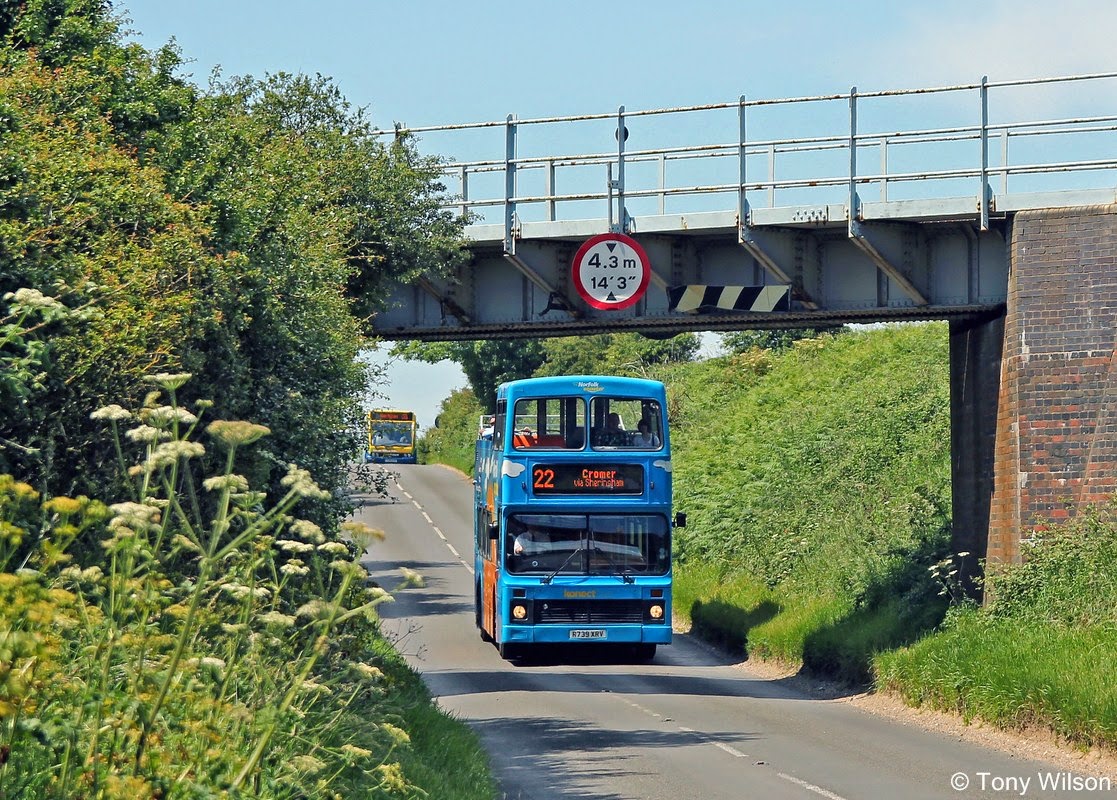 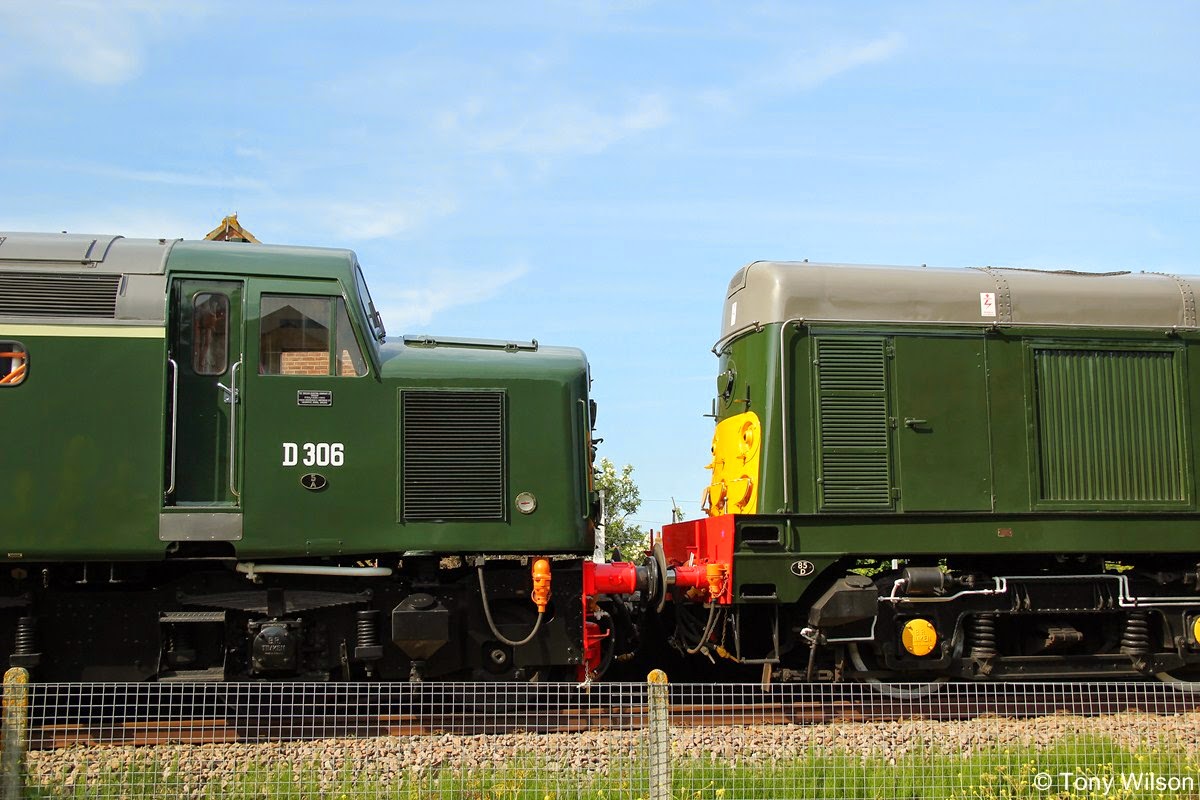 Over the weekend of the 13-15th June the North Norfolk Railway held its annual Summer Diesel Gala (see also the Features site here ).
Go-Ahead subsidiary Konectbus operate an hourly open-top bus service between Cromer and Sheringham, and is extended four times a day through to Weybourne and the Muckleburgh Military Collection near Kelling. For around a mile or so from Sheringham the route parallels the railway until the line crosses over the A149 near to Weybourne.
On the Saturday afternoon as the bus headed west on the 1420 departure from Sheringham one of the trains was also headed in that direction.

With a visiting Colas liveried Class 37 at the front and a Class 20 at the back, bus and train ran side by side.

Gradually as the line and road came closer to one another......... 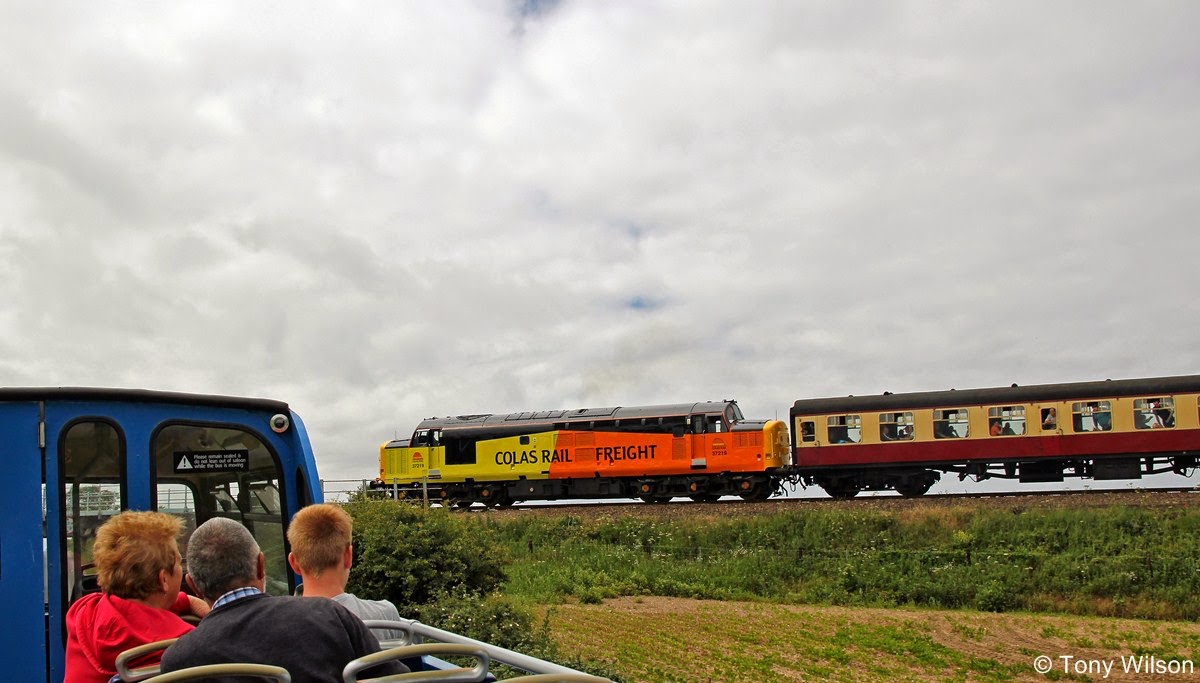 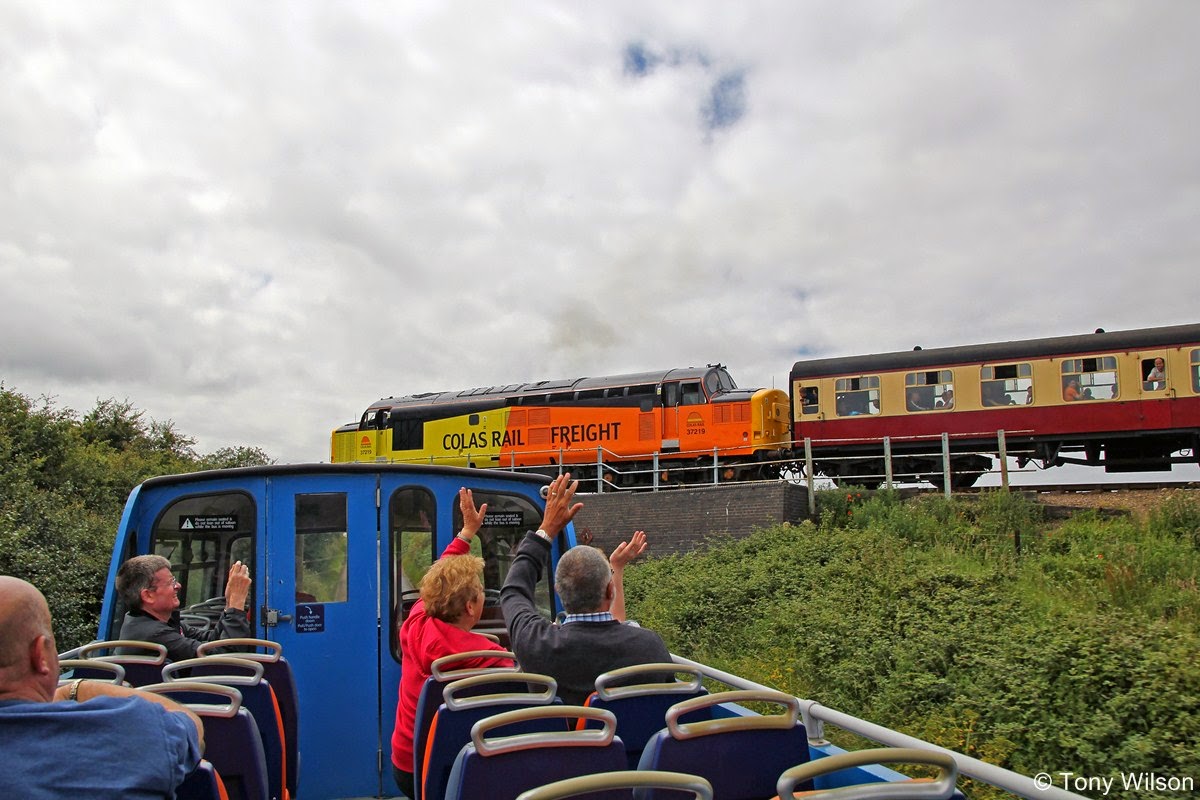 ....the Titfield Moment was re-created.

For those who are probably wondering to what on earth this all refers, there will be others of a certain age who will remember the first showing of a particular film back in 1952.

60-odd years ago the famous Ealing Studios produced and released the “The Titfield Thunderbolt”, the first Ealing Comedy filmed in Technicolor (r).  The storyline centred round the decision made by British Railways to close a branch line to the village. The villagers joined together to run and save the railway and gain a Light Railway Order, but the local bus company ‘Pierce & Crump’ had other ideas. During the film there was a sequence where the train and the bus raced each other between the fictitious stations of Titfield and Mallingford and at one stage encountered one another at a bridge.

However, in 1952 the vehicles were quite different being a small tank engine and a Bedford OB coach.

But back to 2014. The bus is timetabled to depart from the Muckleburgh Collection back towards Sheringham at 1430. And once again quite by chance encountered the same train on its return from a short run to Weybourne Station. However, this time there was no repeat of the 'Moment'. 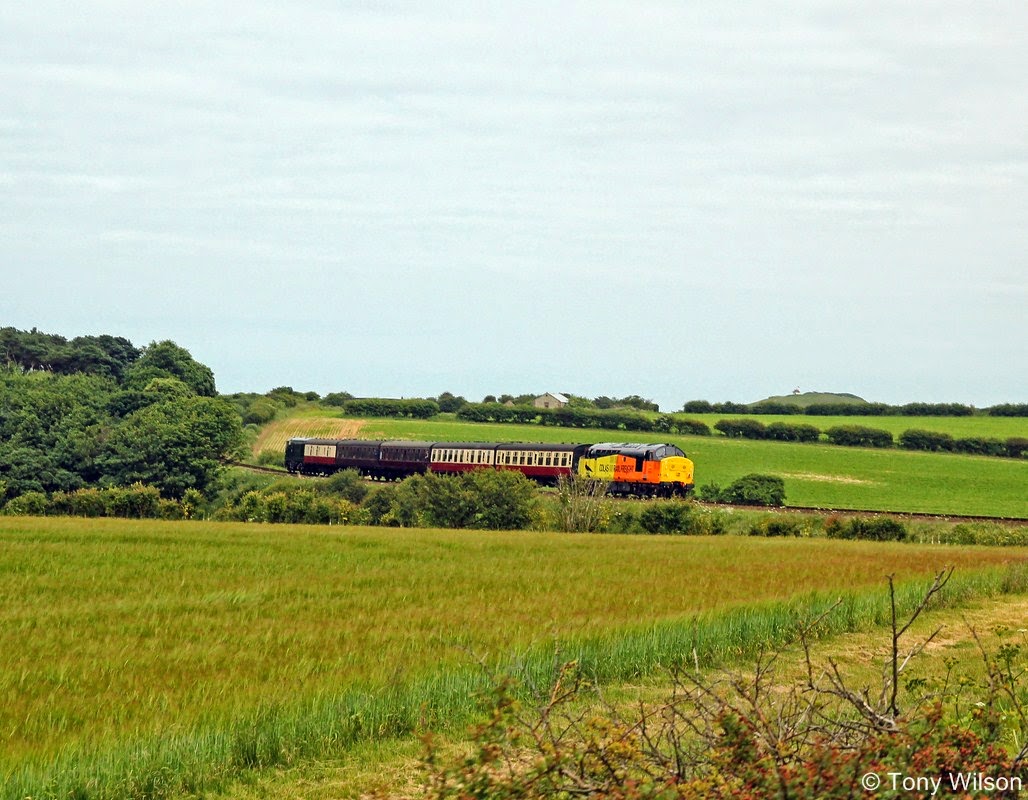 The train had already crossed the bridge and was on the way back to Sheringham. 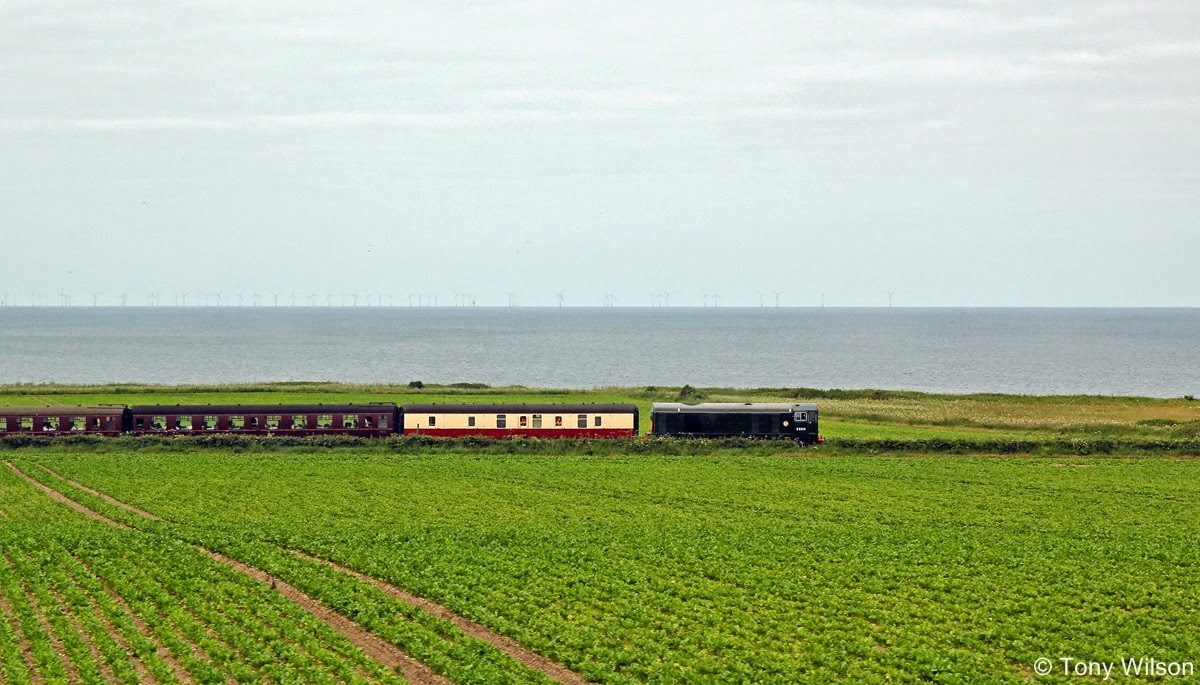 But the bus caught up with the train, this time with the Class 20 in the lead. 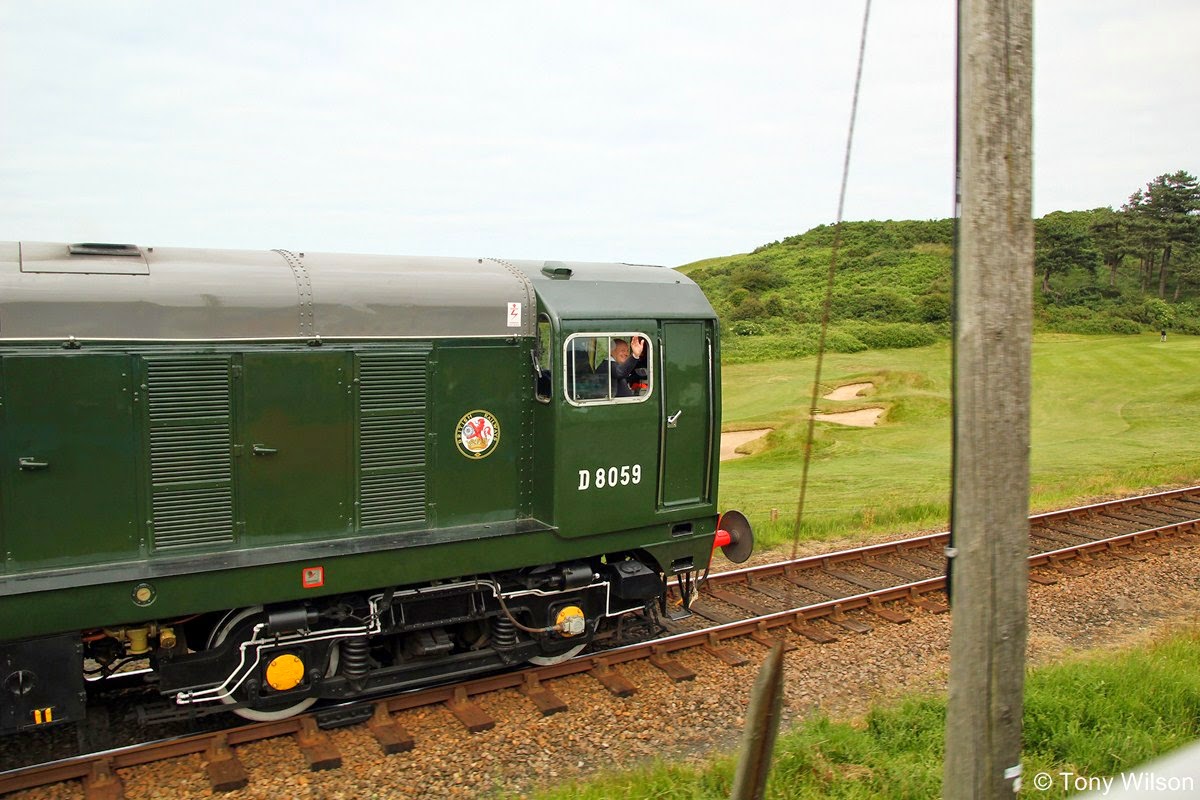 And then ran alongside with drivers and passengers of the respective vehicles acknowledging one another (mind the telegraph pole!) 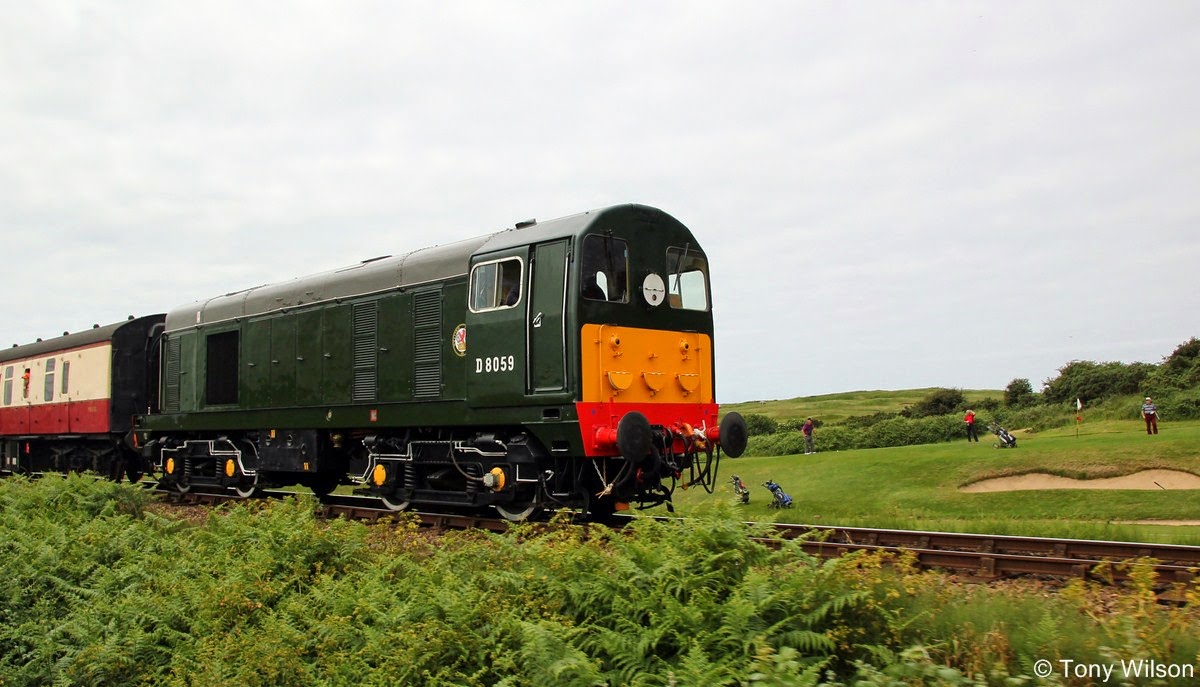 Eventually the bus overhauled the train as it slowed down for the approach to Sheringham alongside the local golf course. One wonders whether the sight put any of the golfers off of their swing though?

After 15-months preparation a celebratory weekend was held on the North Norfolk Railway back in June 2012 with the re-creation of a number of elements of the original film. Included was a similar Bedford OB operated back then by Messrs Pierce and Crump. Two images below illustrate the suitably adorned OB (on loan from Lodges), bound for ‘Mallingford’ (Sheringham) from ‘Titfield’ (Holt) in one direction, and back the other, where a pure luck shot caught the bus and train together. 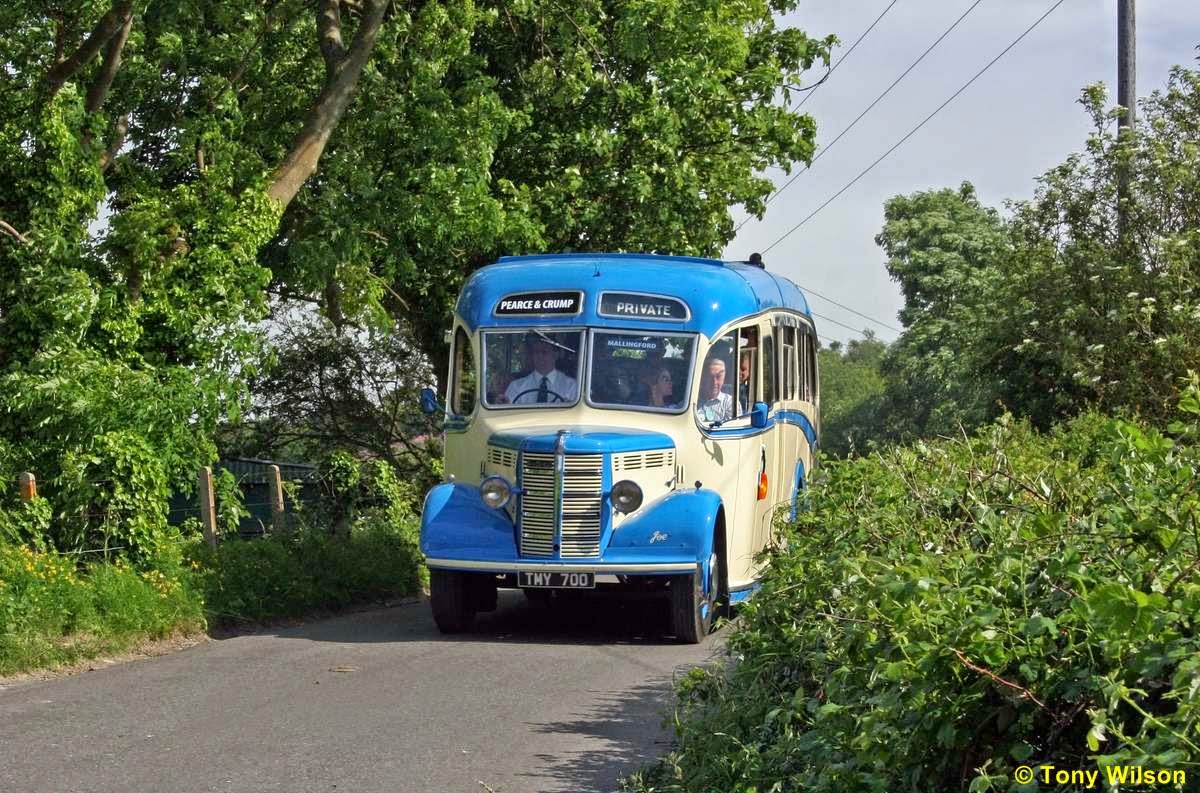 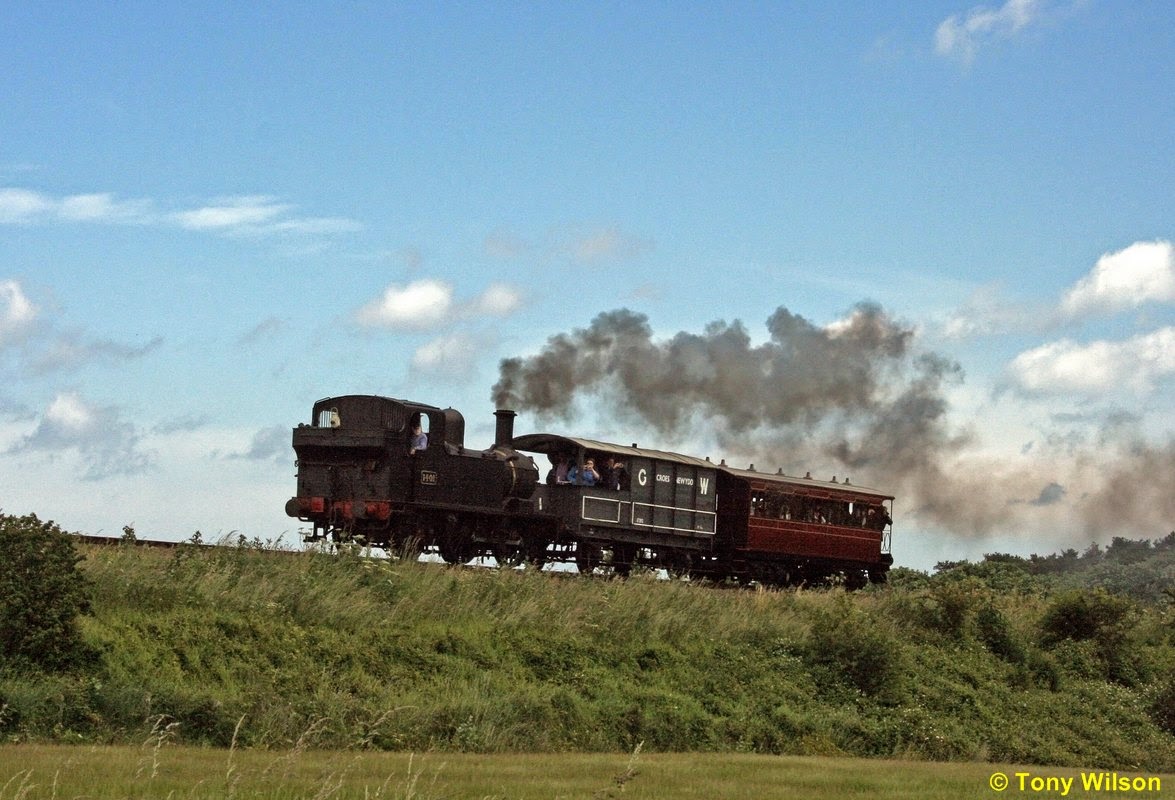 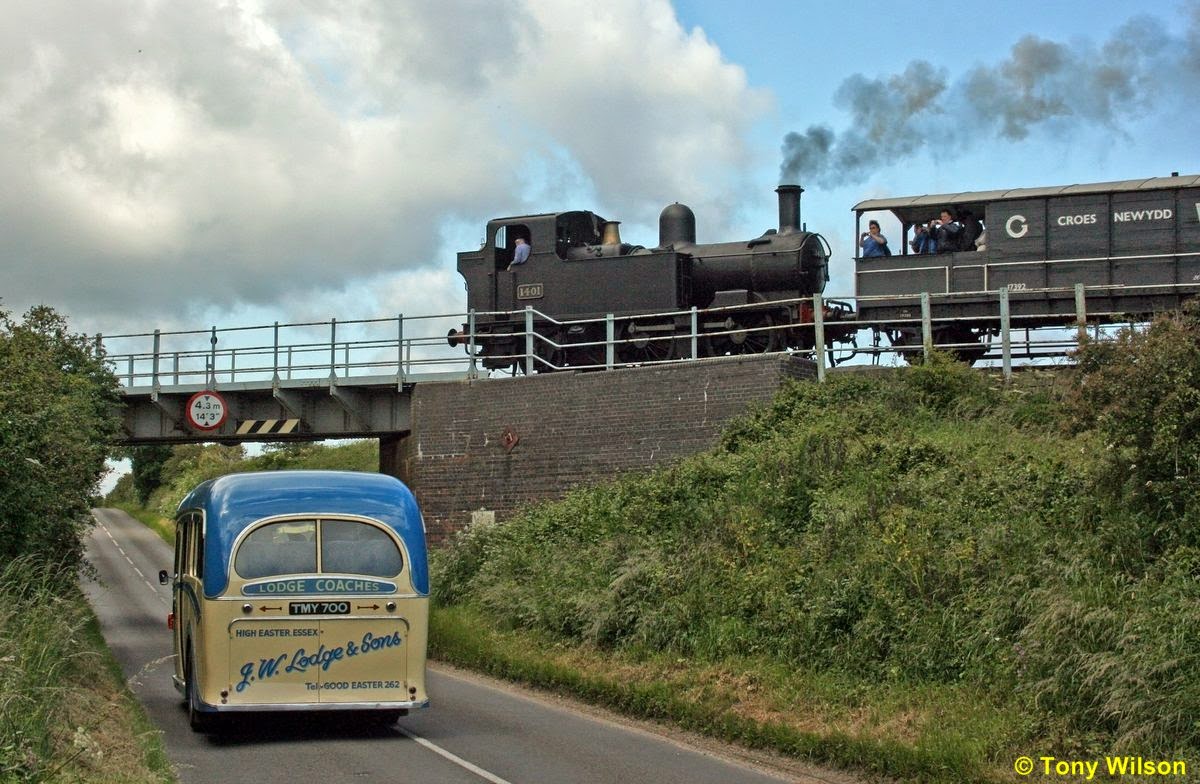 
SEE MORE ABOUT THE EVENT ON THE FOCUS FEATURES SITE 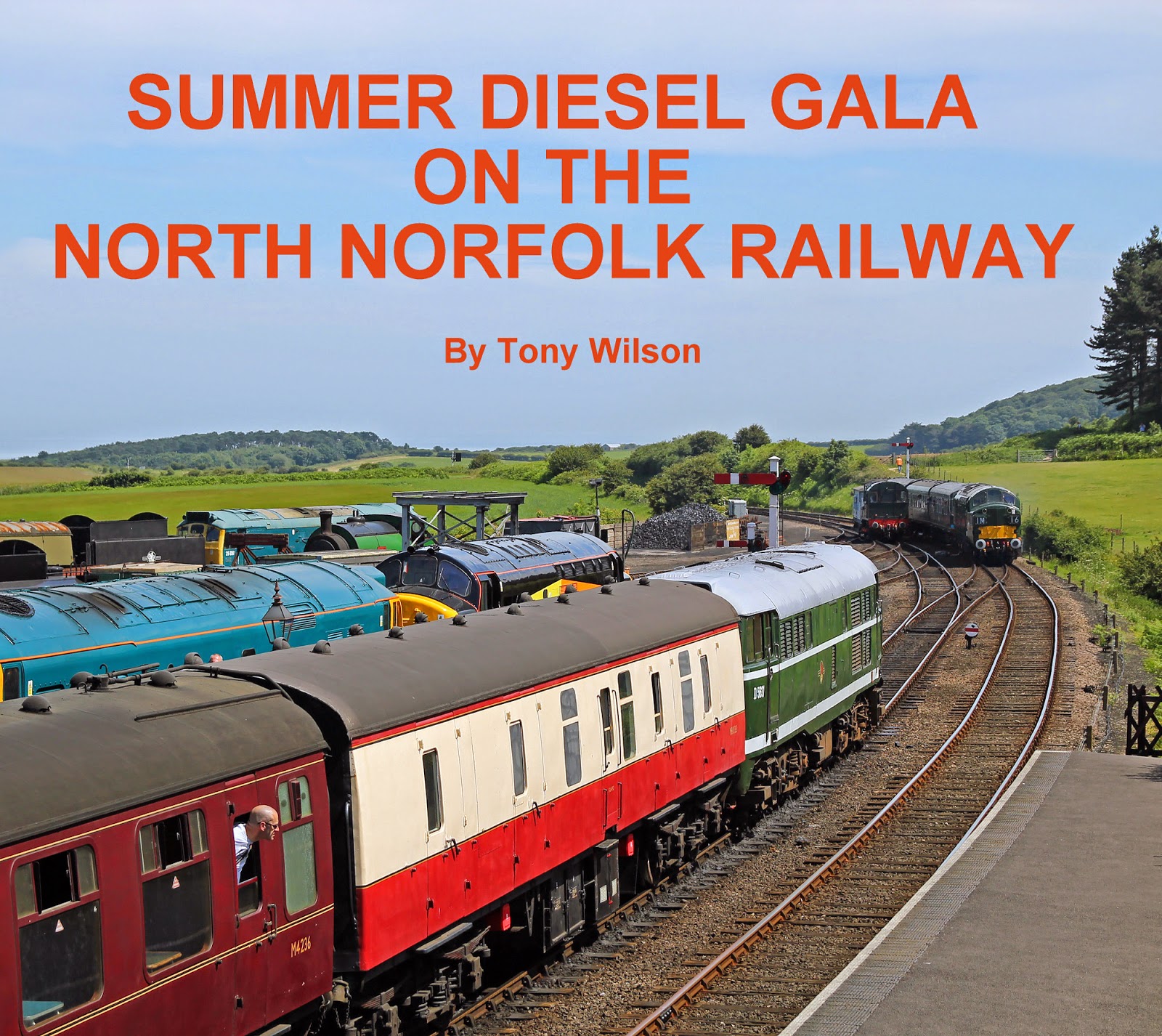