Four towns and cities across England have been shortlisted to become home to a new national college to train engineers working on the HS2 rail link.
Either Derby, Doncaster, Birmingham or Manchester will host the National College for High Speed Rail, the government has announced.
It will work alongside several smaller training centres across the country, a Department for Business, Innovation and Skills spokesman said.
The college is due to open by 2017.
Objectors to the HS2 project have said the line will cause an unacceptable level of environmental damage, loss of homes and disruption to many communities.
In April, MPs voted overwhelmingly in favour of allowing the bill paving the way for it to progress despite a sizeable rebellion by backbenchers who wanted to block it.
'Huge potential'
The HS2 link is planned to run between London, the Midlands and the North of England and is expected to cost about £43bn.
Work on the first, London to Birmingham, section of the route is due to start in 2017 and is not set to open until 2026.
The onward legs to Manchester and Leeds could start being built in the middle of the next decade, with the line open by 2032-33. 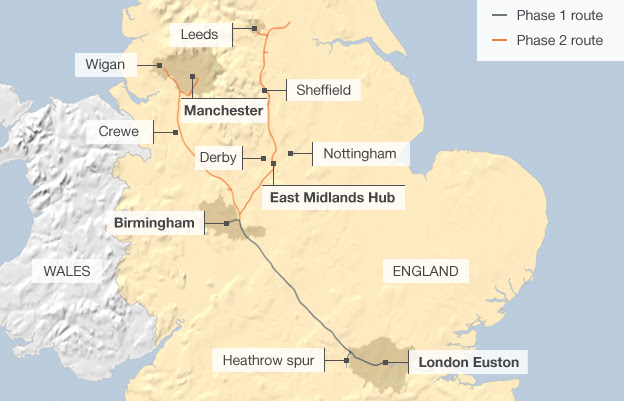 Work on the first, London to Birmingham, section of the route is due to start in 2017, with the Manchester and Leeds legs expected to open in about 2033
Transport Minister Baroness Kramer said the college would equip "the engineers of the future" with the skills needed to work on the high-speed link.
"HS2 is a vital part of our long-term economic plan, providing and safeguarding tens of thousands of jobs," she said.
"This new national college will operate with a 'hub and spoke' model, so there is a huge potential for towns and cities across the country to benefit from the opportunities it will bring."
The High Speed Rail College will be the first national college to be developed, with plans in place to establish others in the future.
Representatives from the four shortlisted locations are due to give presentations to an advisory group on 27 June, with a final decision expected to be made in July.