First Bus has announced an investment of £20M in 109 brand new vehicles which will carry customers for the first time at the Glasgow 2014 Commonwealth Games.

The new buses, which are currently being delivered, will form part of a 380 fleet that will move members of the Games Family, including athletes, officials, media and sponsors, and in addition operate specific shuttle and park & ride spectator services during the Games. These services, operated by First Bus, will augment First Glasgow’s network of high frequency, regular services across the city.
The new fleet consists of StreetLites, manufactured by Wrightbus (part of the Wrights Group) and Enviro 400s manufactured by ADL, and will sport bespoke Glasgow 2014/First Bus branding emphasising the company’s ‘Personal Best’ campaign.
First unveiled two of the new buses at the site of First Glasgow’s £20m new headquarters and depot on Cathcart Road in the south side of Glasgow. The site, which has been named ‘Caledonia’ by First Glasgow staff, will become partly operational for the first time during Glasgow 2014. Although not due to be officially opened until November this year, First factored in plans to the construction schedule to enable it to operate up to 280 vehicles during the Games (around 75% of the capacity of the ten acre site when fully operational). 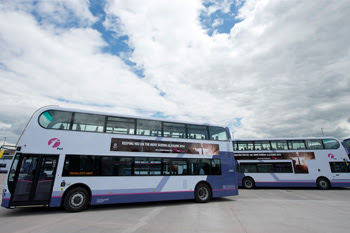 Some of the new vehicles that will debut during Glasgow 2014
“The arrival of our new vehicles is a key milestone as we put in place our final preparations for the Games,” said Andrew Scholey from First, who is heading up the company’s Glasgow 2014 spectator and Games Family services. “I’m delighted that we’ve made this investment and delighted too that the vehicles sporting our Personal Best branding look so striking and so impressive.”
Andrew, who also headed up First’s bus spectator contract at the London 2012 Olympics, continued: “We’ve been planning for Glasgow 2014 for over a year. We’ll be operating thousands of journeys over the course of the Games with our shuttle services at some venues at certain times operating as often as every 20 seconds. We’ve got a great team in place and are really looking forward to the Games beginning on July 23.”
More than 700 bus drivers will travel to Glasgow to help deliver First’s shuttle, park & ride and Games Family services. Around 200 First drivers from across the company’s UK operations, including Plymouth, Bristol, Norwich, Manchester, Leeds and Livingston have volunteered to drive at the Games and will spend between one and five weeks in Glasgow. A further 500 drivers have been sub-contracted from other bus and coach companies.
One of the 200 First drivers heading to Glasgow is John Weaver who’s been a Driver for First Scotland East at its depot in Larbert for 35 years. He said: “All 200 First drivers will be proud to be part of Glasgow 2014 and proud to represent First. We’ll be going all out to set new driving and customer service Personal Bests.”

He added: “I’m hoping to be fortunate enough to transport some athletes, maybe even Usain Bolt! It’s a great opportunity and I’m very excited to be part of Glasgow 2014.”