Plans for the long-awaited extension of the Bakerloo line are set to take a significant step forward next month. Transport bosses will start a ten-week public consultation on extending the line to parts of south-east London historically poorly served by the Tube. Proposals to build the line by 2040 at a cost of £2.6 billion have been included in the Mayor’s infrastructure plan outlining essential transport projects to be delivered by 2050. The line, which currently runs from Harrow & Wealdstone to Elephant & Castle, would be extended via Old Kent Road and Lewisham to Hayes and Beckenham Junction. It would operate a peak service of 27 trains per hour as far as Catford Bridge, with 15 trains per hour to Hayes and 6 trains per hour to Beckenham Junction. 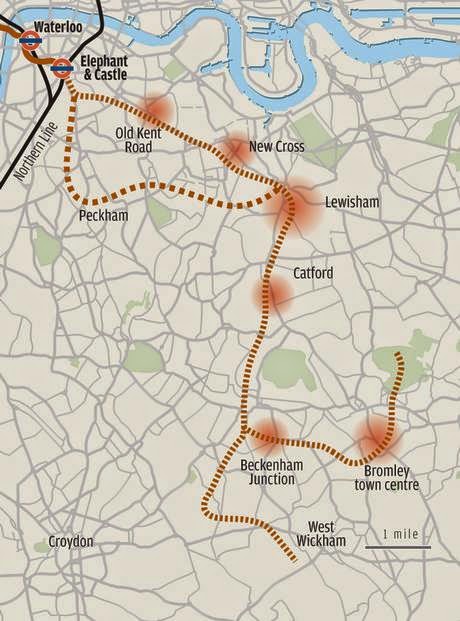 The extension The Mayor believes it would relieve congestion on national rail routes into London Bridge and generate £400million in annual economic benefits. In his “London Infrastructure Plan 2050” the Mayor has also made the case for a £450million upgrade to the rest of the Bakerloo line by 2045, increasing capacity by 33 per cent. The TfL consultation will gauge local support for the extension, as well as identify any problems. Results are  due in Spring 2015.  Although it has no legal standing, it is seen as a step towards firm commitment to the scheme. It will consist of an online survey, with a website also providing background information, including a summary of TfL’s work looking at various options. Caroline Pidgeon, Liberal Democrat chair of the London Assembly transport committee, said: “Extending the Tube into Southwark, Lewisham and Bromley would unleash huge economic opportunities. “After decades of being left behind it is time south-east London was given the transport links it needs to truly unleash its potential.” A spokesperson for the Mayor, said: “The Mayor believes that south London deserves greater investment in transport infrastructure, which is why he is seeking more control over suburban rail services... and exploring the possibility of extending the Bakerloo line.”