Crowds gathered to bid farewell to the Canadian Lancaster plane which has been touring the UK over the summer.
"Vera" joined the only other airworthy Lancaster, operated by the RAF, for a series of events and is now flying home via Iceland and Greenland.
Taking off from RAF Coningsby in Lincolnshire, the two bombers were joined by Spitfires and Hurricanes.

Vera still has a UK engine after one of its own developed a fault and an appeal has been launched to fund repairs.

Thousands of people have watched the last two airworthy Lancaster bombers in the world fly over the site where the famous Dambusters raid was practised. 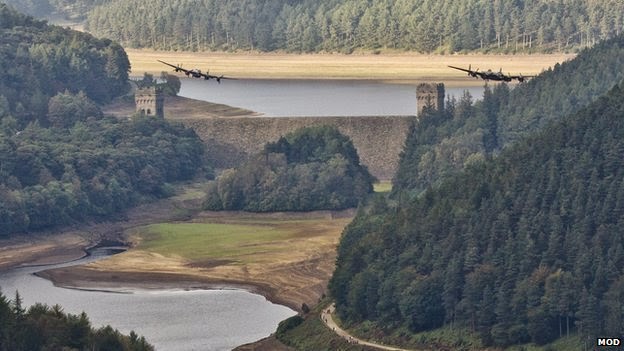 At the weekend they passed Derwent Dam in Derbyshire three times on their way back to RAF Coningsby, in Lincolnshire, from Southport Air Show.
The Lancasters have been united for a series of events in the UK.
The Canadian Warplane Heritage Museum have flown their prized Avro Lancaster to the UK for a 2 month tour which has now ended. The Lancaster has been joined by the only other airworthy Lancaster in the world, owned and operated by the Royal Air Force's renowned Battle of Britain Memorial Flight (BBMF). The planes have participated in many events and activities during the time that the Canadian plane has been based in the UK.

On Tuesday 23rd September the Canadian based plane departed Coningsby at 10:00 am for return to Canada. The aircraft passed over RAF Cranwell, RAF Waddington, Lincoln Cathedral and RAF Scampton, before leaving the area.
It is estimated each of the Lancasters has flown about 6,000 miles attending dozens of shows and events. The first transit stop on the return flight will be Keflavik, Iceland.
Departure from Keflavik, Iceland is scheduled for Wednesday 24th September with 2 additional legs over several days to factor in weather, etc. The arrival date and time back home at Hamilton will be announced closer to the arrival.