megabus.com has launched a new European network from a Belgium base since 17th September 2014

· New network to link Brussels with Luxembourg, Lille and Rotterdam following growth in popularity of low-cost inter-city coach travel
· megabus.com to create 20 jobs through new base in Belgium
· More services also introduced on routes between Brussels and Paris, Brussels and Amsterdam and Brussels and Cologne
· Continued investment in high quality coaches equipped with free wi-fi, air conditioning and toilets
· Tickets to go on sale at www.megabus. com with fares from €1*
Significant growth in the popularity of low-cost inter-city coach travel in Europe is to see market-leading operator megabus.com launch a new network of services in the Benelux region from next month and open a dedicated base in Belgium.

The company has announced plans for new low-cost coach services which will link Brussels with Luxembourg and Rotterdam from 6 October, offering fares from €1* - less than the price of a cup of coffee.
megabus.com – part of international transport company Stagecoach Group – is also creating 20 jobs with the establishment of a base near Brussels. The depot, located at Sint-Pieters- Leeuw in the province of Flemish Brabant, will house a fleet of six vehicles and the operation will be headed by a general manager.
The number of passengers using megabus.com&# 39;s growing coach network in Europe increased by more than 50% between 2012-13 and 2013-14 as the company continues to transform travel options for passengers. megabus.com already carries more than 15 million passengers a year across Europe and North America.
The new network of routes which will see daily services between Brussels and Rotterdam. In addition, subject to final route authority being granted, megabus.com also plans to operate services between Brussels and Luxembourg and Brussels and Lille.

The new services will operate on the following frequencies:
- Brussels-Luxembourg – one service per day in each direction (journey time 3 hours)
- Brussels-Lille – three services per day in each direction (journey time under 2 hours)
- Brussels – Rotterdam – one service per day in each direction (journey time 2 hours 20 minutes)
With megabus.com fares available from €1* price comparisons show that the coach operator is able to offer significantly cheaper travel than the existing transport modes which link Brussels with Rotterdam, Lille and Luxembourg.
As well as serving Luxembourg for the first time, the company also plans to increase the frequency on some of its existing Europe services from the same date. This will include more services a day between Brussels and other key European cities.
There will be five return journeys per day between Brussels and Paris; four return journeys between Brussels and Amsterdam; and four daily return journeys between Brussels and Cologne.
In addition, the new timetable means that Antwerp will now have a link to Cologne for the first time, operating one service a day in each direction.
Elsewhere in Europe new services are planned between Paris and Cologne and between Amsterdam and Cologne and an increased frequency between Amsterdam and Lille.
megabus.com launched low-cost coach services between London and mainland Europe in 2012 and already links around 100 destinations in the UK and Europe. The European network already includes Paris, Lille, Boulogne, Amsterdam, Brussels, Ghent, Antwerp, Rotterdam, Cologne, Toulouse and Barcelona.
Services have proved very popular with families, students and tourists looking to save money on their travel and spend extra on entertainment when they arrive at their destination. Passengers travel on state-of-the- art coaches featuring free wi-fi so they can stay connected on the move. 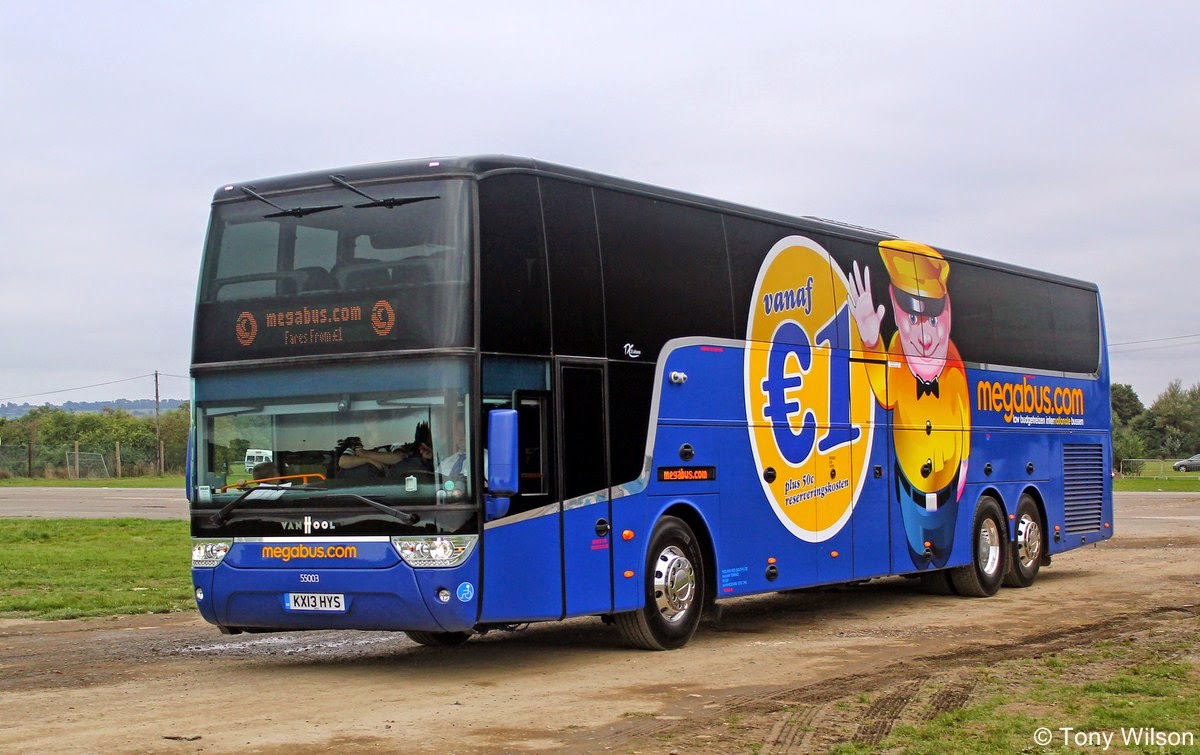 The coaches, which have some of the greenest engines in Europe, are also equipped with air conditioning and a toilet, and Stagecoach Group continues to invest in new vehicles for its European services. Last year, megabus.com introduced a fleet of 10 new 72-seat coaches to operate on its network in Europe.


A further six coaches – representing an investment of over €2million - are set to be introduced on the European network in Belgium from 6 October. The 72-seat vehicles have all been manufactured by Belgium based coach builder Van Hool, and will be equipped with free Wifi and power sockets. They also have onboard toilet facilities for additional comfort and convenience.
Prices on megabus.com services start at €1*, with a range of competitive fares above that designed to ensure the coaches are full or as close to capacity as possible. megabus.com uses bigger, higher capacity 72-seat coaches, rather than standard vehicles with around 50 seats. This allows the company to have a low cost per passenger, keep fares down and ensure the service is profitable.
All megabus.com drivers undertake a detailed operational and customer service training programme, including route familiarisation and driving assessments. The training is part of an EU standard qualification for professional bus, coach and lorry drivers. megabus.com ensures full compliance with relevant EU working time legislation and the company also has stricter maintenance standards than legal requirements as part of its commitment to safety.
megabus.com Managing Director Elizabeth Esnouf said: “This will be our first base in mainland Europe and gives us scope to operate these new services, as well as increasing the frequency on a number of our existing routes to and from Brussels.
“We have been operating in Belgium for a couple of years now and we are seeing an increasing number of people choosing coach travel for long journeys. We’re pleased to be able to offer even more travel options to people living and working in Belgium, and visitors to the country, and we look forward to attracting even more people on to our greener, smarter coach services.”
megabus.com’s new base in Belgium will be located at an existing depot owned by Belgian coach company Bell Tours. megabus.com will share Bell Tours’ depot in Sint-Pieters- Leeuw where megabus.com vehicles will be stored and maintained and the company will also have office space from which to operate its new network of services.
megabus.com was launched in the UK in 2003 and expanded its services to North America in 2006. After launching services in Belgium, France, the Netherlands and Germany, most recently the company introduced a service to Barcelona, Spain, which has proved popular.
All European locations are served daily, with routes to and from the UK operating during the day and overnight. An interchange at London Victoria Coach Station offers links to and from locations in Scotland, England and Wales.
megabus.com offers Spanish, French, Dutch and German language websites, which allow customers to book and pay in Euros.
The success of megabus.com’s services has seen it create more than 400 jobs over the past decade in the UK and Europe and a further 1,000 jobs in North America." "