A pre-arranged party to celebrate the reopening of a road after 19 months of tram works instead marked another missed deadline.
Residents and businesses gathered in Chilwell Road in Nottingham for the pre-arranged event that should have coincided with the end of the network extension to Beeston. 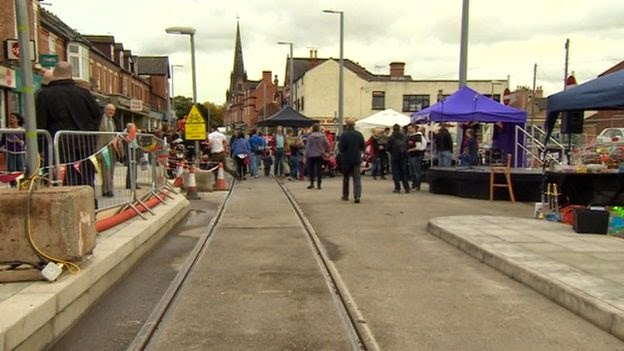 MP Anna Soubry said the lack of communication and constant mistakes was "dreadful".

Contractor Taylor Woodrow Alstom apologised for the inconvenience.
Chilwell Road, which is home to dozens of businesses, was closed in March last year for the extension to the city tram network.
The work should have been completed shortly after Christmas 2013 but several delays mean the road is now not due to open fully until the end of November.
Julie Cameron, owner of Cameron House, was angry she will now only get a month to sell her Christmas stock. 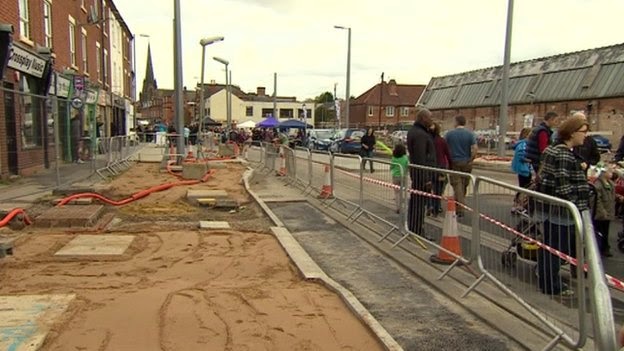 "I was advised the road would reopen [on Monday] and nothing had changed only two or three weeks ago. I planned my business on that information."
Ms Soubry, MP for Broxtowe, said: "They have had 19 months of pretty dreadful stuff and yet another broken deadline, and yet another broken promise.
"And yet this awful, dreadful lack of communication is unacceptable."
A spokesman for Taylor Woodrow Alstom said the delay was caused by work on the water mains.
"We understand the works have caused significant disruption, and apologise for any inconvenience," he said.

"However, most of the construction in Chilwell Road will soon be complete and we would like to assure local residents and businesses that every effort is being made to ensure that the remaining works do not take any longer than necessary."