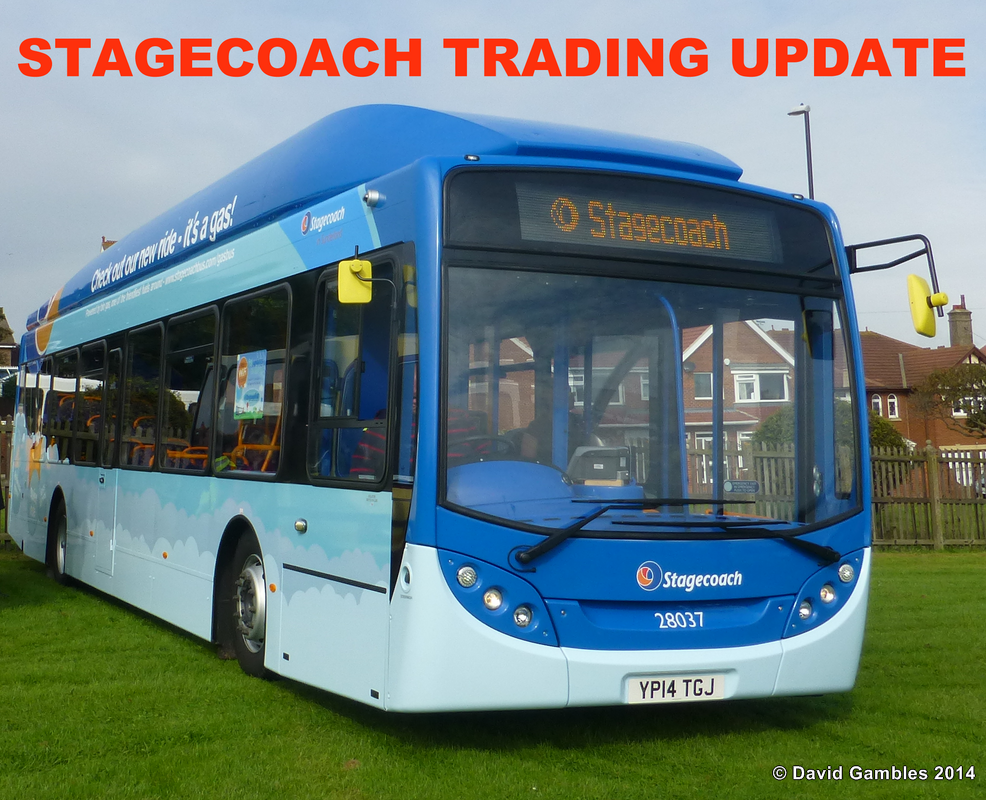 Stagecoach Group plc has issued an update on trading in advance of a series of meetings with analysts.

The overall profitability of the Group has remained satisfactory, and there has been no material change to expected adjusted earnings per share for the year ending 30 April 2015.

The division has grown both passenger volume and revenue year-on-year. Like-for-like revenue growth for the twenty four week period of 3.2% excludes the revenue earned from contracts to provide transport for the Commonwealth Games.  Passenger volume growth on an equivalent basis was 0.7%.  Higher commercial revenue (i.e. revenue earned directly from fare-paying passengers) has contributed most to overall revenue growth, with concessionary, tendered and school revenue also growing.  In the equivalent period last year, revenue was earned from providing additional bus services to replace train services that were affected by major railway resignalling work.  As a result, revenue growth in the twelve weeks ended 12 October 2014 was lower than for the preceding twelve weeks.

Stagecoach were disappointed but not surprised at the decision by the North East Combined Authority earlier this month to refer proposals to implement a bus contracting system in Tyne and Wear to a Quality Contracts Review Board.   These proposals are to be subject to more rigorous examination by a properly constituted independent board that should not be motivated by political considerations and who will take appropriate, impartial, professional advice in reaching a decision. The Review Board has a duty to determine whether the proposals meet the five statutory public interest criteria that have to be met to support the introduction of the contracting scheme. The operators do not believe these tests have been met and will present robust evidence to the Review Board to demonstrate this.   Stagecoach say that they will discuss with the Review Board the significant flaws in the proposed contracting scheme, and at the same time and continue to review their legal options.   The voluntary partnership agreement proposed by the local bus operators would be far more effective at delivering customer service improvements and generating savings for the public sector without the huge financial risks of the proposed contracting scheme to the region's taxpayers. 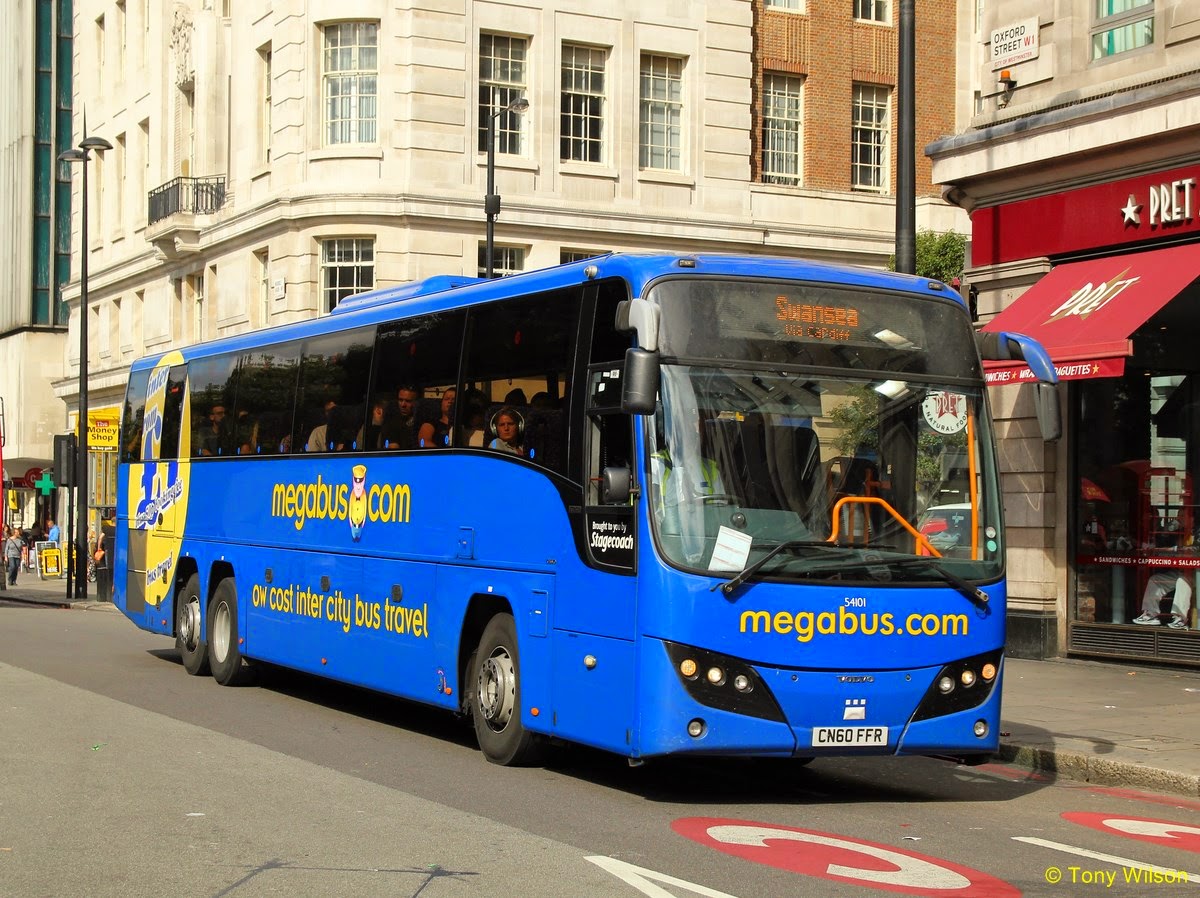 Stagecoach have been pleased with the progress of their megabus.com inter-city coach operations in continental Europe and are now planning to extend the network further.   They will introduce more European megabus.com services over the remainder of the year ending 30 April 2015, building on the success of megabus.com in the UK and North America.  This is an exciting prospect for the medium-term but will result in a few million pounds of new start-up losses in the year ending 30 April 2015 and around £20m of additional capital expenditure, primarily in acquiring new vehicles. 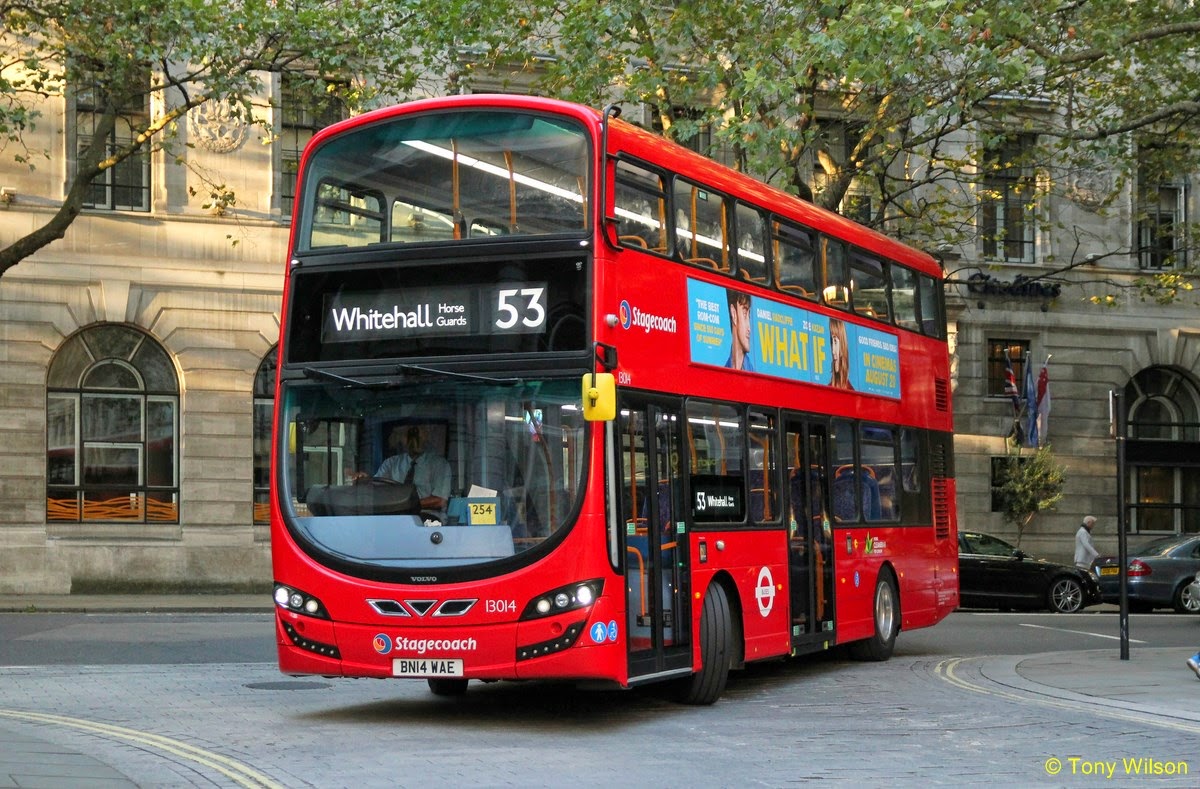 UK Bus (London)
Revenue growth in our UK Bus (London) Division has been good during the period.  Traffic disruption from ongoing road works has continued to adversely impact on the quality incentive income, which has moderated revenue growth.  Excluding the uplift in contract prices to compensate for the cessation of Bus Service Operators' Grant (a rebate of fuel duty), revenue increased by 9.4%. The focus remains on keeping costs under control and bidding competitively to retain existing and win new contracts. 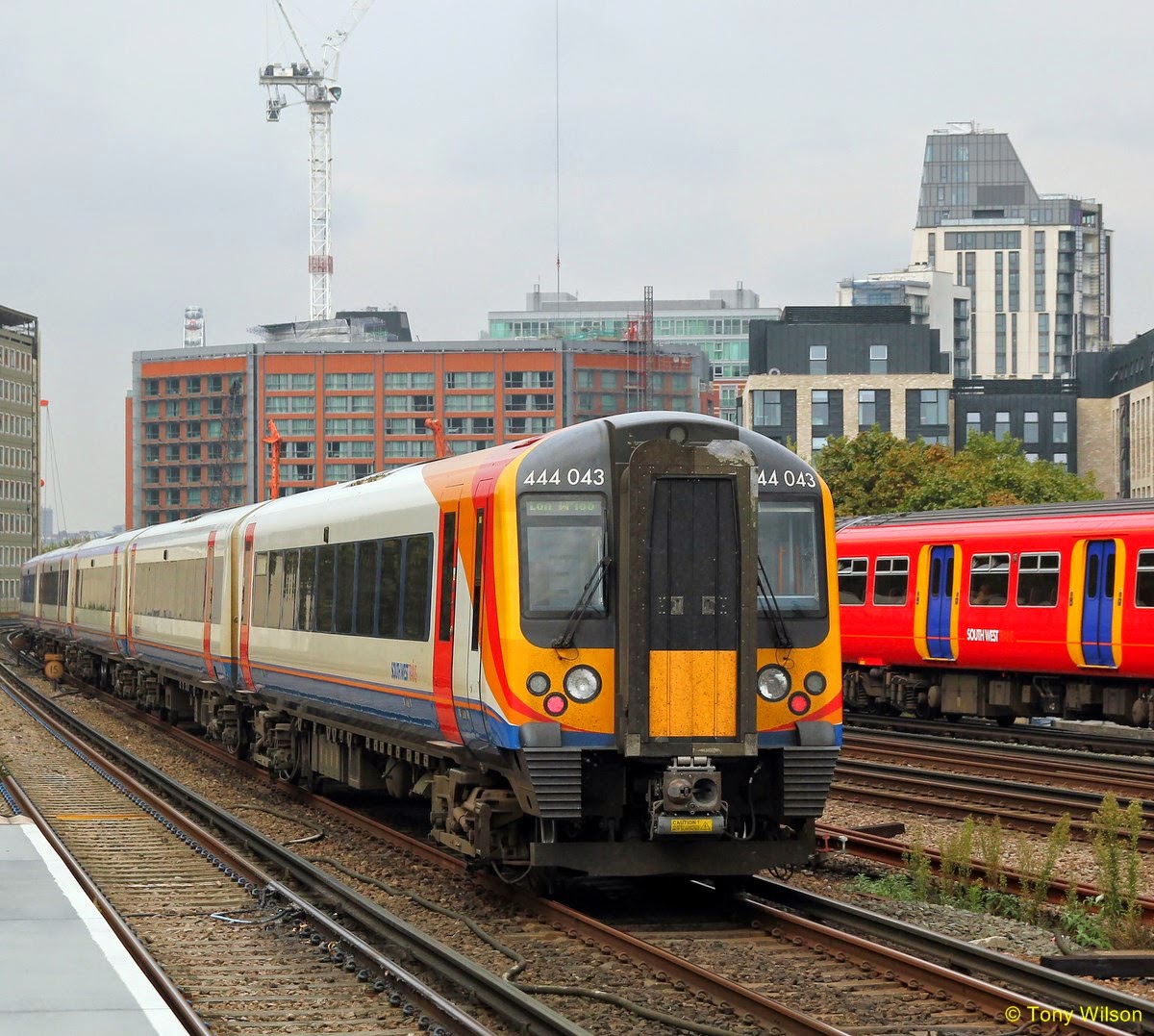 The financial performance of the UK Rail Division is in line with expectations, reflecting the focus on growing revenue and controlling costs to mitigate the substantial increases in premia payments to the Department for Transport ("DfT"). As expected, the rate of revenue growth is higher than that reported for the first twelve weeks of the financial year, which is partly due to the effect of prior year resignalling work in the Nottingham area.

Revenue growth in North America is encouraging. Megabus.com increased revenue by 13.5% in the five months ended 30 September 2014. Stagecoach are satisfied with the progress of the Florida megabus.com network, where operations began in May 2014. The operating environment in North America is competitive, but we remain positive on the division's prospects and the market opportunity.

The new West Coast Trains franchise commenced on 22 June 2014 and is planned to run until at least 31 March 2017. The DfT has the discretion to extend the contract, on pre-agreed terms, by an additional year to 31 March 2018. Trading to date under the new franchise has been strong.

Stagecoach and their joint venture partners are in ongoing discussions with the US Department of Justice and the New York Attorney General to conclude the previously reported litigation relating to the Twin America joint venture.
The New York sightseeing market remains highly competitive, with current trading still challenging.

The Group has entered into £535m of new bank facilities.  The new facilities have been committed for a period of five years to October 2019 with the potential for them to be extended by up to a further two years.  These facilities replace previous bank facilities that were due to expire in February 2016.

Although there are a number of challenges to growing profit in the year ending 30 April 2015, overall current trading is satisfactory and the company are on course to meet expectations for the year.

The Group plans to announce its interim results for the six months ended 31 October 2014 on 10 December 2014.