Worst Train Service to be Improved

A project to improve "one of the worst train services in the UK" has been given the go-ahead.
Journey times between Lincoln and Nottingham are currently slower than they were 100 years ago, according to campaign group Rail Fair. 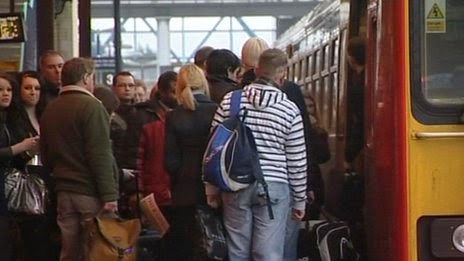 In a letter from Secretary of State Patrick McLoughlin, funding for three years has been confirmed by the Department for Transport.

It is hoped the improved service will start running in May 2015.

Earlier this year, Rail Fair - which claims the line is the "worst in the UK" - started a petition calling for the government to take action over proposals to improve the service.
Robert Jenrick, Conservative MP for Newark, said: "It is absurd that you could travel faster along this key line in 1909 than you can today.
"The line has been neglected for years. That is now changing and Newark and neighbouring communities will receive the east-west service they deserve."
In his letter, Mr McLoughlin said: "The department will continue to work closely with East Midlands Trains to ensure the service enhancements are operational and available to passengers from May 2015."
It is understood the government will contribute more than £1m to the estimated £2.1m scheme, with the rest of the costs being met by a "consortium of local authorities", the DfT said.