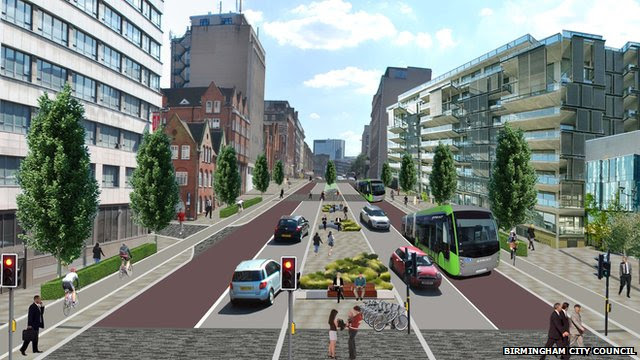 A £4bn transport plan for Birmingham has been unveiled by the city council.
The 20-year Birmingham Connected plan includes three new tram lines, nine high-speed bus routes, reopening rail lines and building two new stations.
The council said it did not currently have "all the funding in place" to deliver the planned schemes.
It would bid for government and European Union funding but said "in all likelihood" local businesses would have to make an "increased contribution".
'No real alternative'
This could take the form of additional "ring-fenced" taxation on businesses or additional business rates, the council said.
It may also borrow money against "future increased revenue" generated by a better transport network in the city.
The council said it would also look at the "long-term future" of the A38 through the city centre, including closing existing tunnels and sending traffic along a "substantially upgraded ring road".
More than one million car journeys were made into Birmingham each day, the council said, and the current public transport system meant commuters had "no real alternative" to driving.
The council estimated by 2031 there could be an additional 80,000 cars in the city if nothing was done.


The council also wants to reopen and upgrade rail routes to Moseley, Kings Heath and Sutton Coldfield, with new stations at Fort Parkway and Castle Vale.
A low emissions zone is planned for the city centre, with incentives for taxis and buses to switch to electric power.