The proposed £3billion extension to the Bakerloo Line can be built without cash handouts from the government, City Hall today as a public consultation on the route was launched. 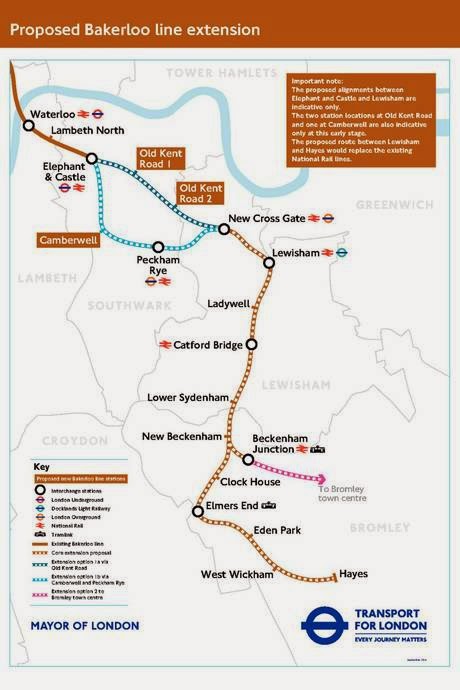 The Elephant & Castle-to-Lewisham link could be funded by local businesses and housebuilders who would benefit from the first major extension to the Tube in South London for a generation.
Adopting the same funding model as the Northern Line extension to Battersea, the Treasury would offer financial guarantees for the Bakerloo Line Extension (BLE).
The extended route would run from Elephant & Castle towards New Cross, Lewisham, Bromley and Hayes.

City Hall said it would create 15,000 new jobs and 40,000 new homes, boosting the fortunes of Old Kent Road, Lewisham, Catford, New Cross and Bromley town centre.
Isabel Dedring, Deputy Mayor for Transport, told the Standard: “You want infrastructure to have a big impact in terms of building homes and the increase in land value will help you fund it. You want to find a route that is going to generate maximum revenue in order to cover the cost of building it.
“This is how we did the Northern Line extension where there isn’t grant funding per se, it is in the form of a guarantee. I would expect this to be what we are aiming for here. My intention is not to make a request to government in the form of cash but there clearly would be a role for central government to play. “
The BLE is among the major projects included in the Mayor’s 2050 Infrastructure Plan. It would improve journey times into central London for residents of a swathe of south east London poorly served by rail, while creating more seats on national rail services.
The proposed extension would run through a tunnel from Elephant & Castle to Lewisham, via either Old Kent Road or Camberwell and Peckham.
Possible route: the second option will see new Bakerloo Line connections at Camberwell and Peckham Rye It could then link into the existing Network Rail line using the South Eastern rail line to Beckenham Junction and Hayes via Ladywell and Catford.
Mayor Boris Johnson described it as “one of my top priorities”, adding “it would provide a vital new transport link for the people of south London and help to spur jobs, new homes and regeneration in this part of the capital.
“It has huge potential to breathe a new lease of life into a swathe of London’s opportunity areas, as well as freeing up capacity on national rail lines.
“As London’s population continues to rise it is essential that we expand the transport network in this way if we are to meet Londoners’ needs and ensure our city’s continued competitiveness and success.”


Northern Line extension to Battersea and Nine Elms given go-ahead

The London Underground's Northern Line extension to Battersea has been given the go-ahead.
Construction will begin in spring 2015 and it is hoped the line, which will be extended from Kennington to Battersea, will open by 2020.
Two new stations will open - Nine Elms to the east and one at the heart of the Battersea Power Station development.
The full cost is expected to be up to £1bn, which will be funded by developments in the area.
Ravi Govindia, leader of Wandsworth Council, said: "This is fantastic news for the people of Battersea and the benefits will be felt right across Wandsworth.

The extension is part of a redevelopment of the Battersea Power Station area
"This part of the borough is already coming to life with thousands of new homes and jobs and its two new Tube stations will turbo charge the process.


"The Northern line extension will take the pressure off the rest of our local transport network and gives Nine Elms official Zone One status."
The project was approved by the Secretary of State for Transport.
The decision follows a public inquiry conducted by an independent inspector last year to consider the impact of the extension.
Some residents had opposed the plans, saying it would lead to a loss of parkland and increase noise and pollution in the residential area.