A proposal for a £23m redevelopment of Preston's Grade II-listed bus station which would include a youth centre, have been unveiled.
The Lancashire County Council (LCC) and Preston Youth Zone (PYZ) plans include a sports hall, arts facilities as well as 36 new bus bays in the station.
The plan has been put forward after the station was protected from demolition by English Heritage last year. http://focustransport2011.blogspot.co.uk/2013/09/preston-bus-station-update.html 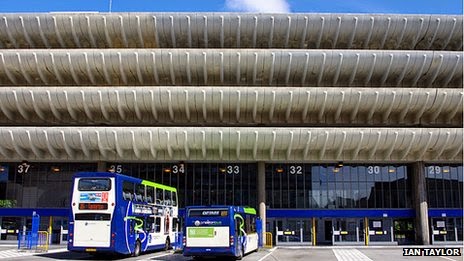 A planning application will be submitted for consideration next April.
LCC and PYZ are funding the project with £7.4m being allocated to the bus station, £6m for the Youth Zone Plus and the remainder for repair and highway improvement costs.
Lancashire 'asset'
English Heritage said the Grade II listing would not prevent changes being made to the building, provided its architectural significance was protected.
Guy Topping, chairman of PYZ, said: "Preston bus station is not only centrally located it is also extremely accessible to young people, making it an ideal location for us to deliver youth services."
LCC said the the Youth Zone will be "located at the heart of the city" and will make a " huge... difference to the lives of thousands of young people".
Work will start in October 2015 if planning permission is granted.
County Councillor John Fillis, cabinet member for highways and transport, said: "The heritage listing made it clear that the bus station is here to stay and our proposals will ensure it becomes an asset to Lancashire for decades to come."

The bus station was assigned listed status in September 2013 by English Heritage who described it as "truly remarkable".