UPDATE ON A FLUENT OPERATION

As recorded earlier a bus powered by human waste has entered service with the RATP owned Bath Bus Company subsidiary in the West Country.

Managing Director Martin Curtis has provided an update as to the initial days of operation, whilst images have been kindly provided by John Scragg. 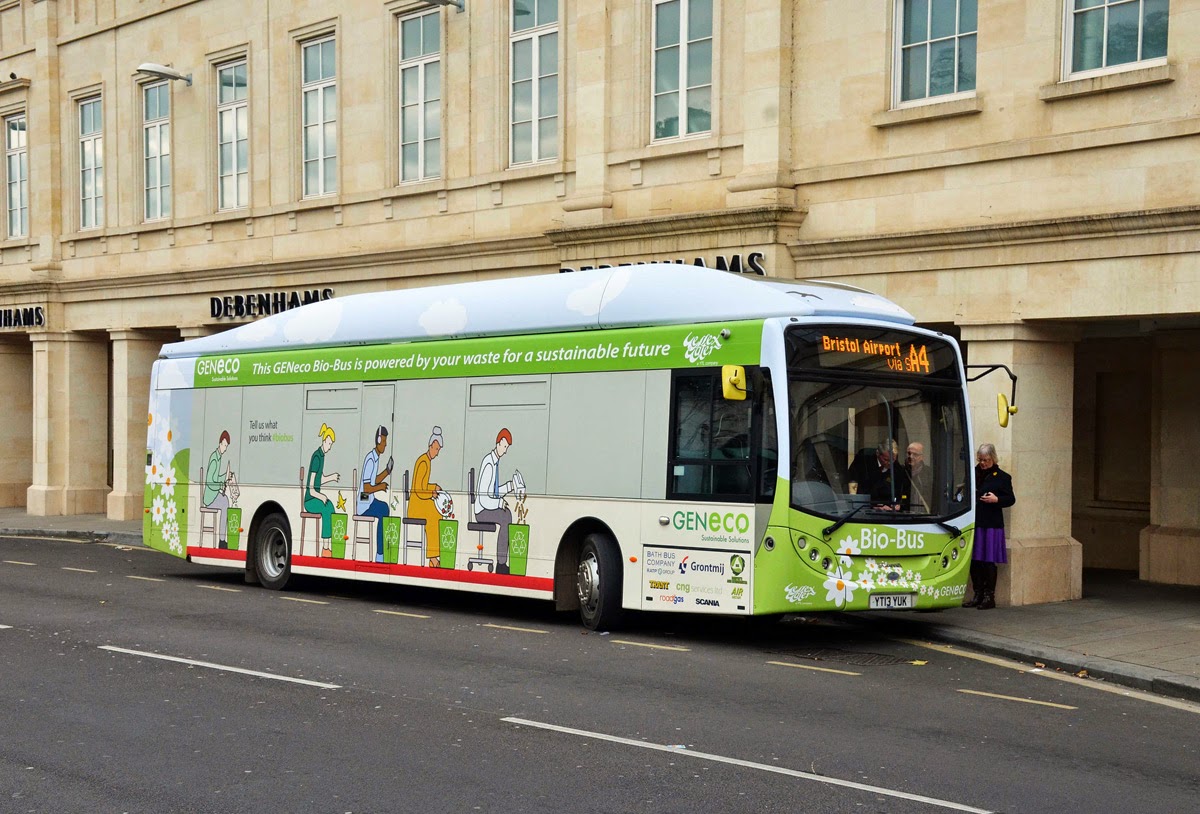 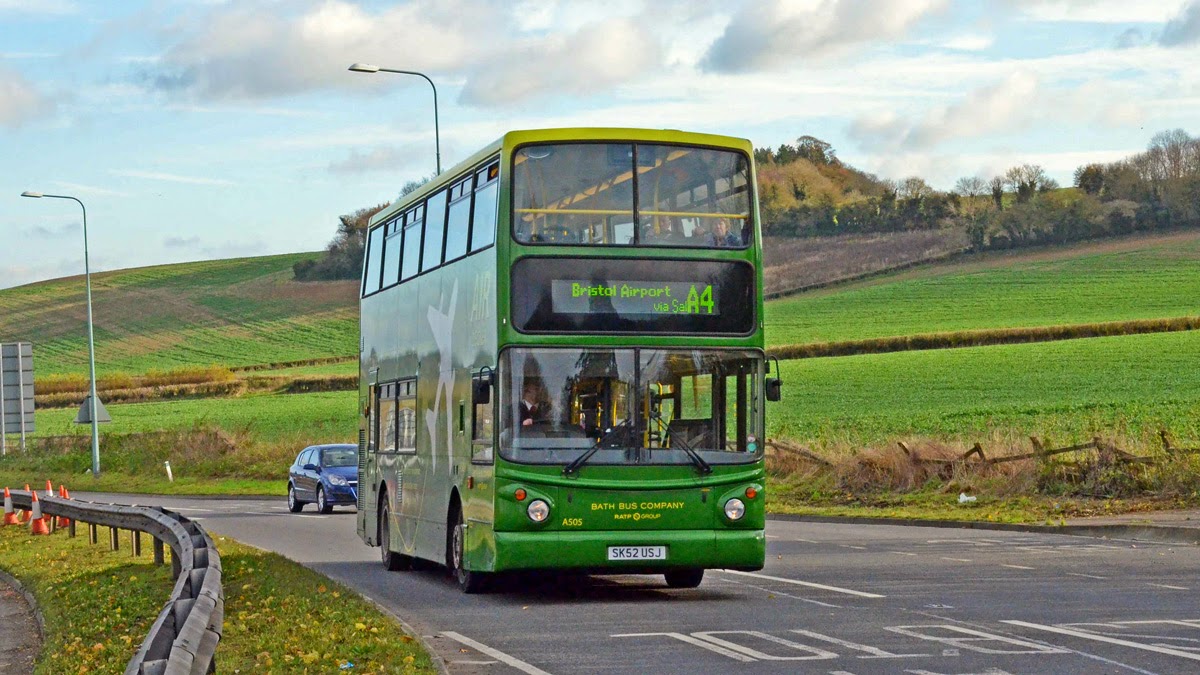 It is then replaced with a normal Airbus while the Bio-Bus is driven to Avonmouth Sewage Works for refuelling. This is further from Bath than the airport - and the issue with the bus is range, otherwise it is working well.

Overloading can be a problem too as both local passengers (with mainly OAP passes) and Airport passengers use the route  so the service is unlikely to use single deckers regularly. In fact we have newer buses planned for introduction next year - including two, 2-year-old ex- Volvo demonstrators with MCV bodies - originally  intended for London. 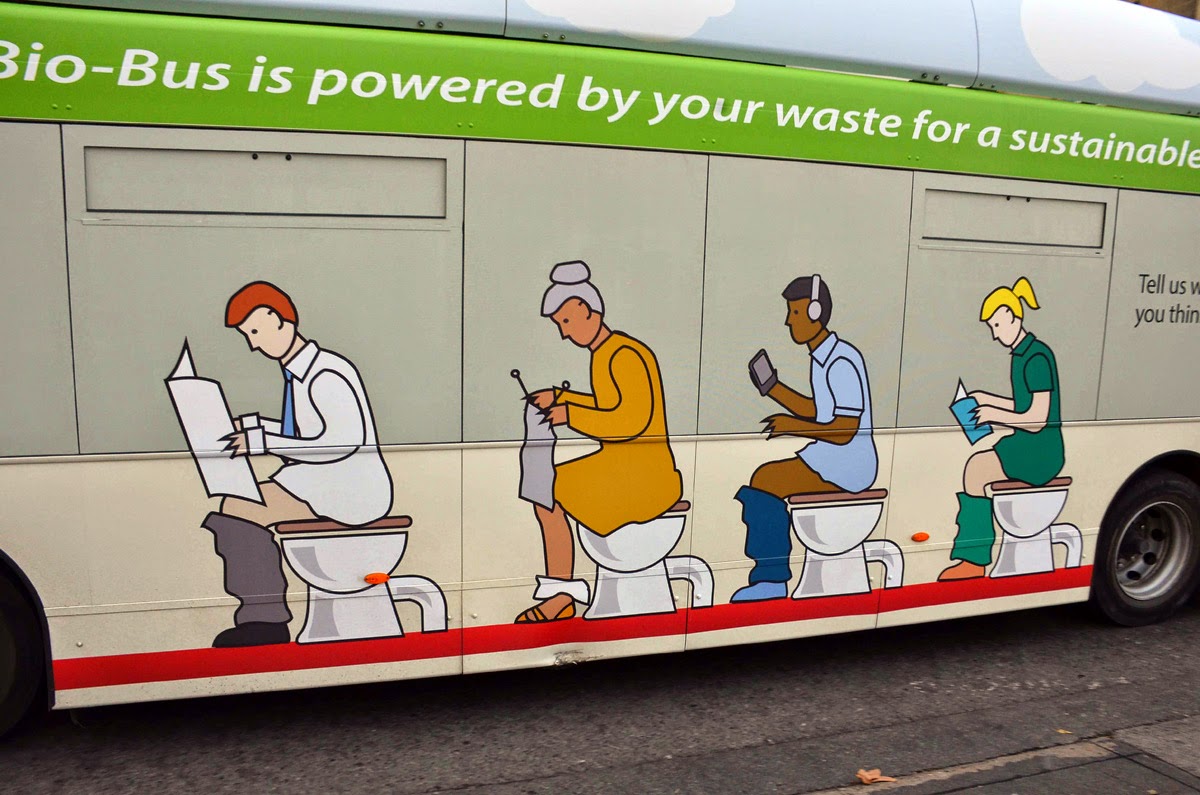 The Bio-Bus was agreed for a month's trial. However, we decided yesterday that such is the interest, after a short break over Christmas and New Year when we expect heavy loadings, it will resume for a further month early in January 2015.

Film and TV crews have visited from USA, Russia, China and South America. The project is led by Wessex Water but RATP have noticed their smallest subsidiary can attract the largest amount of publicity - as if we Imber people didn't know that already!!

For an explanation of that last phrase click here

As an addendum to the aforementioned convenience-based news. If we recall correctly, this is not the first time that porcelain objects have graced the sides of buses. It was back in 1995 that Derby Transport was contracted by a local plumbing company to place a three-sided advertisement on one of their Northern Counties bodied Volvo Ailsa double-deckers. Fleet number 116 was chosen and whilst the front retained the then livery of yellow and red with City Rider name, the remainder of the bus sported a blue and white base colours overwritten with text and comedic adornments. 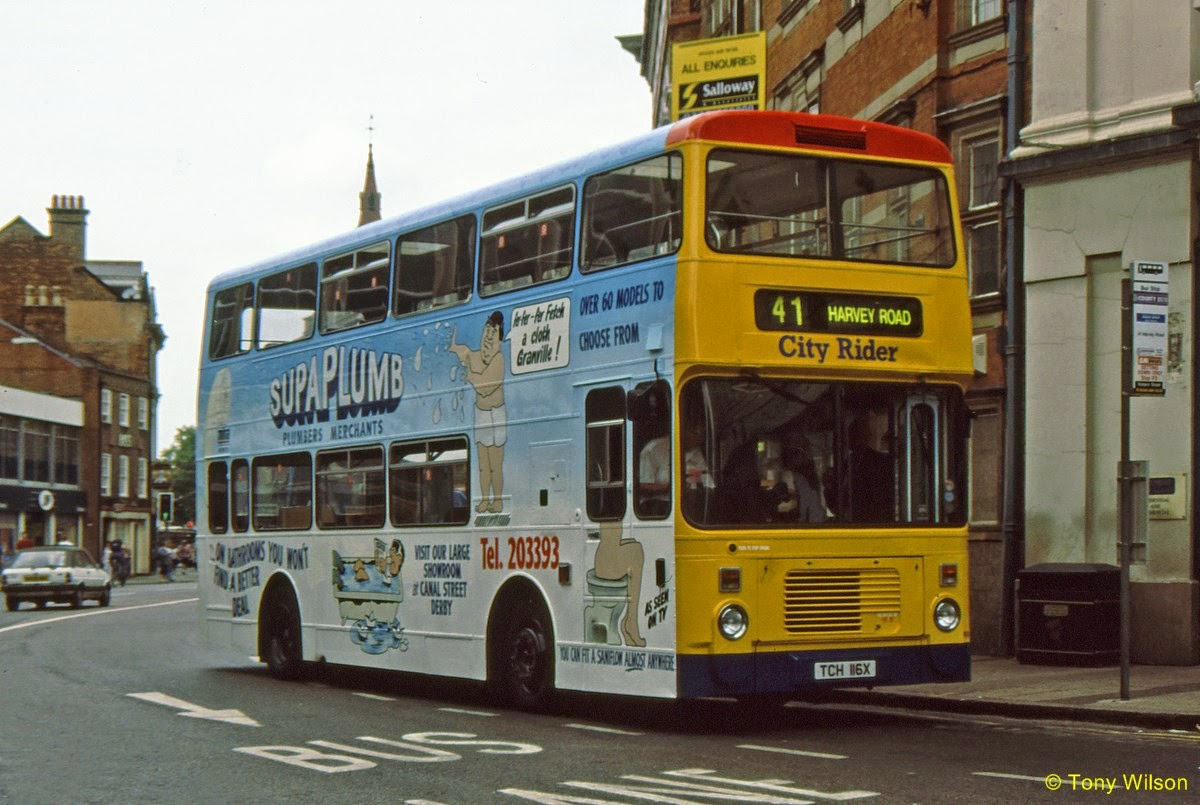 Included was a porcelain toilet bowl strategically placed on the offside driver's door and body panels. Unfortunately this was affixed such, that when were seated in their driving positions, the drivers appeared to be sitting upon the loo. Oh dear.
Whilst this naturally caused amusement, for the crews it was something of an embarrassment. Concerns were raised and in due course the lid came down, the offending item was covered up and the crews could go about their business with their modesty restored.


And whilst we are on this level of humour, did you know it is 80-years since the first Y-Fronts or 'Jockeys' were sold. It was back in 1935 that Coopers Inc of Chicago, Illinois in the USofA sold their first pairs of this new fangled clothing. Dubbed 'Jockey' because it offered a similar degree of support as the Jock Strap, they have since become a firm favorite and have since sold millions around the world.

Now you may be wondering what this little gem of a fact has to do with transport, well in early 1984, two London buses were decorated in allover advertising for the garment. AEC Routemasters RMLs 2412 and 2444 were chosen and respectively 'dressed' in either a black and white or red and white livery. 2412 then had wording for 'Jockey' applied, whilst 2444 sported 'Y-Front' 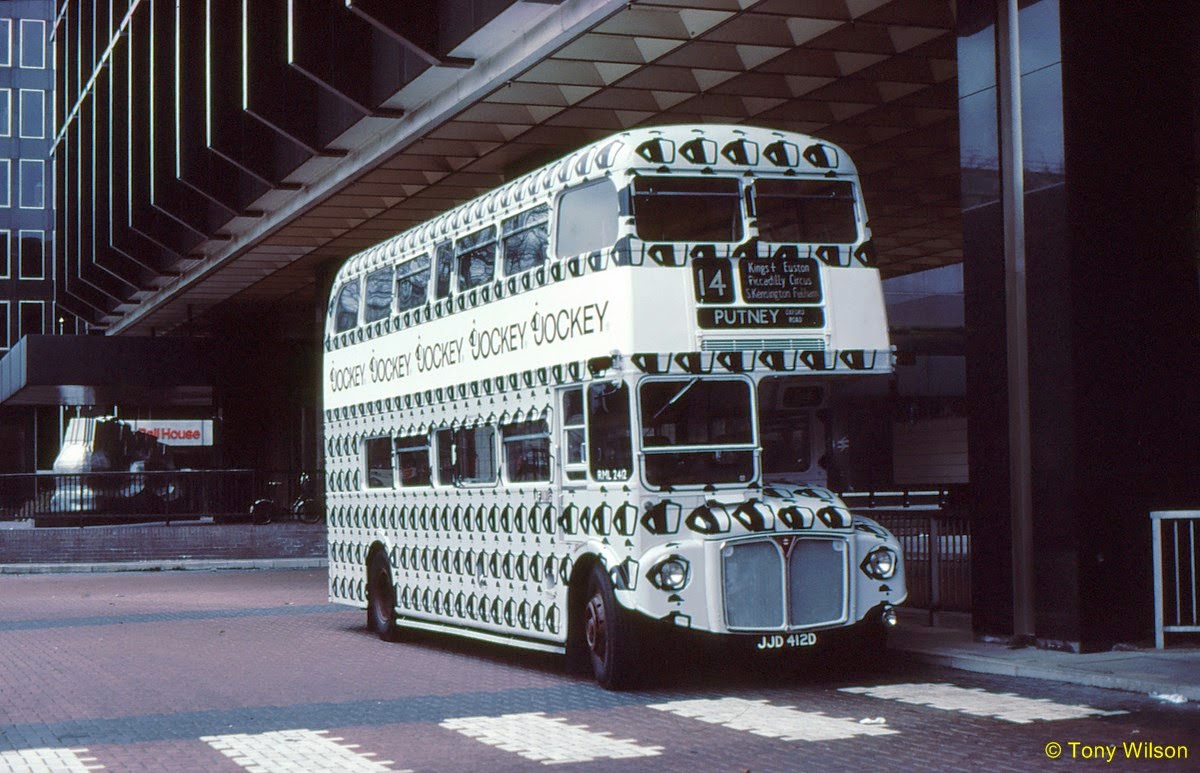 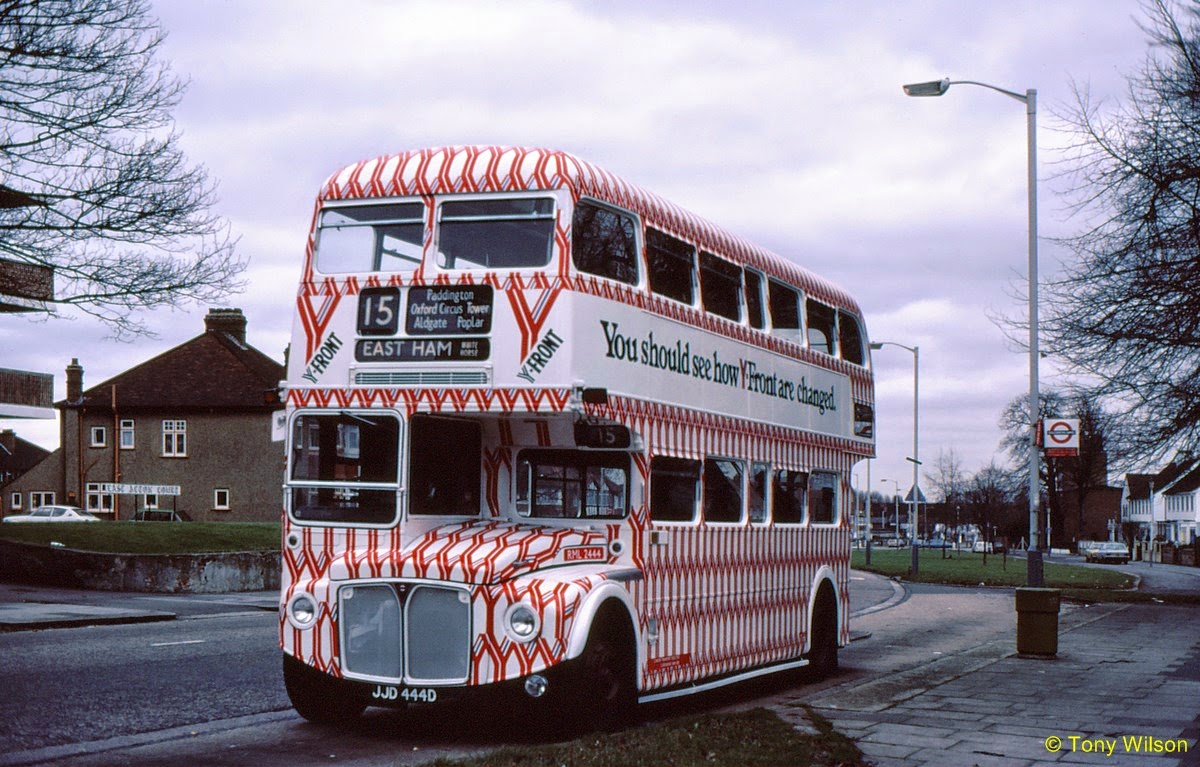 SEE THE LATEST ALBUM ON THE NEW FOCUS FLICKR SITE

"Up the Junction" is a set of images captured recently at Watford Junction during a sunny September Sunday morning. Even though it was the quieter end of the week for trnasport, several interesting buses passed before the lens, none more so than the two 'Harry Potter' buses. 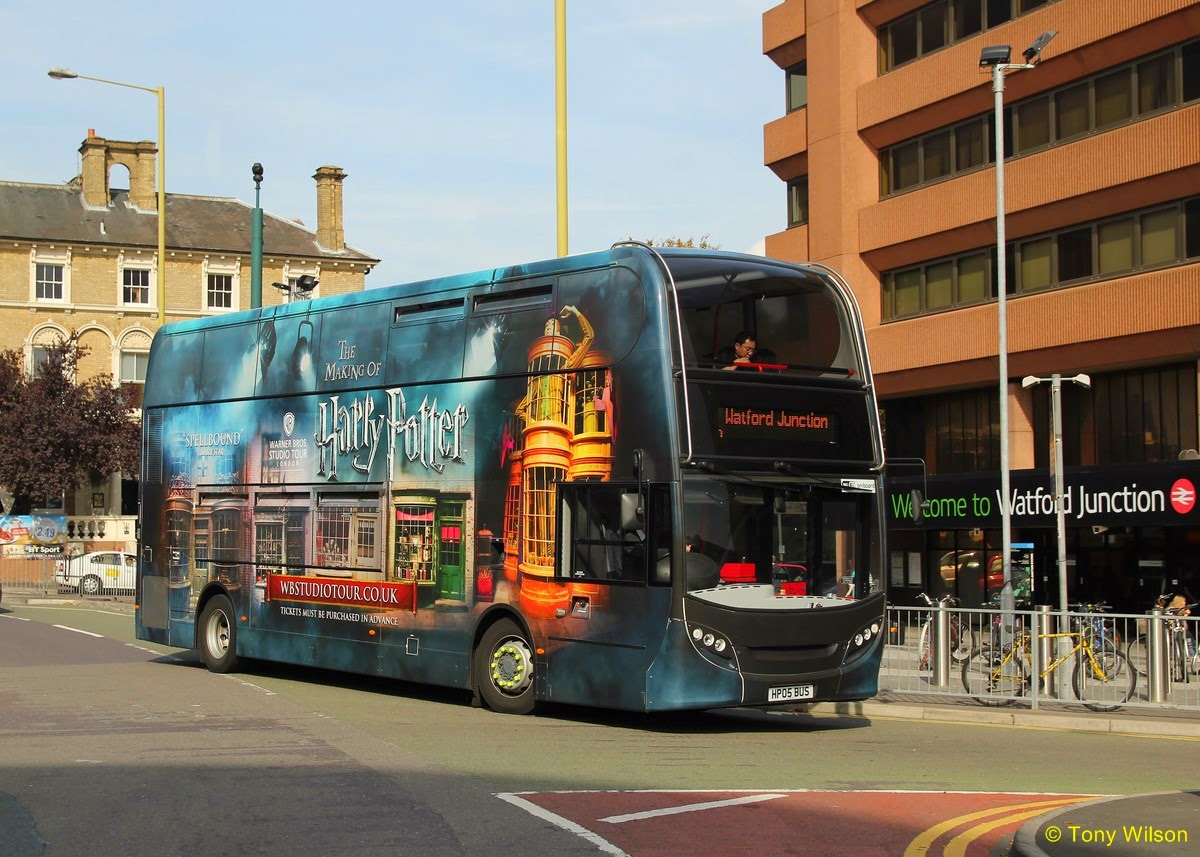 Operated by Mullany's Buses of Garston the two brand new ADL Enviro40D 10.9m double-decks provide a shuttle service between the station forecourt and the film studios at Leavesden. It was here that the Harry Potter films were made and has proved to be a runaway success for both the film and the studio tours. Despite the two buses having the registrations HP05 and HP06 BUS, they were built this year in 2014 and are liveried in overall vinyls.
This latest set of images can now be found by clicking here