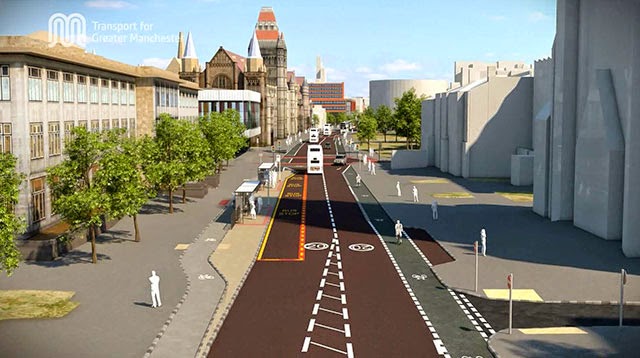 People can take a virtual journey along Oxford Road on a new 3D fly-through video and see what improvements are planned for bus users, cyclists, pedestrians and other road users at www.tfgm.com/buspriority.
The scheme – which will limit general traffic along sections of Oxford Road and include over 4km of segregated bus lanes – is part of a wider bus priority package that will significantly improve the quality, punctuality and reliability of bus services on 25 miles of key routes in Greater Manchester.
The updated plans for Oxford Road have been announced as road-widening, resurfacing and junction improvement work comes to an end this week on parallel Upper Brook Street. The extra road space, and additional parking and loading restrictions, will keep traffic flowing along the route into and out of Manchester city centre.
New toucan crossings on Upper Brook Street are also benefiting pedestrians and cyclists while making Oxford Road easier to reach by people living in Ardwick.
Over 2,000 comments were received on the Oxford Road proposals during a major consultation that has helped shaped the scheme, alongside continuing discussions with stakeholders and properties fronting the route. Key changes include:
Councillor Andrew Fender, Chair of the Transport for Greater Manchester Committee, said: “This is an exciting scheme that will revolutionise sustainable travel along one of the busiest routes into Manchester city centre, with better access to the universities, healthcare and businesses along the route.
“As well as speeding up bus journey times and improving cycling, pedestrians using Oxford Road will benefit from wider footpaths and safer crossing points along the route.
“The plans have been shaped by input from local businesses, organisations and residents and balance the needs of all road users. Ultimately, the bus priority package will create a better environment and future for everyone who works in, lives in or visits our city.”
Sir Richard Leese, leader of Manchester City Council, said: “This is part of a major investment in our infrastructure that will help us make travel greener and more sustainable while also providing huge benefits for the city’s economy.
“These are exciting plans which will transform public transport in Manchester, making bus journeys quicker and more reliable, while also introducing Dutch-style cycling lanes which will provide huge improvements for cyclists on one of the country's busiest bike routes.”
Peter Mount CBE, Chair of Central Manchester University Hospitals NHS Foundation Trust – a member of the Oxford Road Corridor Partnership – said: “I’m genuinely excited at the opportunities that the changes to Oxford Road will bring in the years to come.
“It’s a really bold and innovative scheme that will undoubtedly give better access to the many world class facilities along the corridor, while at the same time making it a more welcoming place to visit, live, travel and work.
“Together with other corridor partners, we’ve been working with TfGM to ensure that this scheme caters for as many people as possible so that Oxford Road becomes an attractive destination and gateway to Manchester city centre and beyond.”
As the proposals require changes to parking, loading and waiting restrictions, the next step is for Manchester City Council, as the local highway authority, to advertise the Traffic Regulation Orders through a formal statutory process. The advertisement of the Orders will begin on 1 December and run for 21 days.
Neighbourhoods surrounding Oxford Road, including those on Higher Cambridge Street, Lloyd Street North, Upper Lloyd Street and Claremont Road, have already benefited from local schemes designed to improve safety, traffic flow and facilities for residents, local drivers, cyclists, pedestrians and bus passengers.
Before any changes can be made to Oxford Road, Princess Street will become two-way between the Mancunian Way and Major Street. This will provide a direct route into and out of the city centre for all road users.
There will also be updated signage introduced on routes further out of Manchester city centre to help motorists find the best route to their destination.

The bus priority scheme has been developed as part of the overall transport strategy for the city centre, which includes plans the Metrolink second city centre crossing.