Plymouth Citybus has acquired vital Western Greyhound bus services in the Liskeard area.
It will take over today, Monday, in South East Cornwall, safeguarding 31 bus driving jobs in the area, and continuing to run the Western Greyhound timetables that are currently in place.
Plymouth Citybus, part of the national transport group Go-Ahead, will take on services previously run by Western Greyhound in and around the Liskeard area.
That includes the 572 between Looe and Plymouth, the 573 between Looe and Liskeard, the 574 between Liskeard and Callington and the 576 between Plymouth and Bude, via Callington and Launceston.
It will also run the section of service 593 between Plymouth and Liskeard.
Western Greyhound will continue to run the 593 between Newquay and Liskeard and through tickets will continue to be available.
Plymouth Citybus intends to take over the lease of the depot off Culverwood Road in Liskeard, along with acquiring nine low-floor buses which will be branded under the new name of ‘Go Cornwall Bus’.
Plymouth Citybus currently run a fleet of 180 buses in Plymouth and its travel to work area, carrying in excess of 16.3 million passengers a year.
Richard Stevens Managing Director at Plymouth Citybus said "We are really delighted to be able to come to an agreement with Western Greyhound to take over these routes and safeguard not only 31 local jobs, but securing vital bus services in South East Cornwall. We have a wealth of experience of running buses in the area and have this year started providing services to The Rame peninsular and into Liskeard, complementing our service between Callington and Tavistock. I would like to personally welcome the staff into the Citybus family and assure them that they are in good hands."
Mark Howarth Director at Western Greyhound said "We recently put Western Greyhound up for sale and we believe that the deal with Plymouth CityBus for the Liskeard area represents good value for both our employees and for bus users.
"We started our first operations in south east Cornwall in August 2004, stepping in when DAC closed down their operations there, and stepped in again when local bus operator Phil Hambley of Pelynt retired.
"Frequencies have been steadily increased with through services introduced between the Cornish resort of Newquay and Plymouth, and more recently increasing the peak-hour frequency between Liskeard and Plymouth to half-hourly.
"A network based on connections at Liskeard was developed together with integrated ticketing with First Great Western trains on the Looe Valley corridor. I am delighted that Plymouth CityBus will be able to take this network to the next phase of its development.
"I would like to publicly thank all our staff who have worked so hard under often extremely difficult circumstances, and I would like to thank the public for their loyal support over the past 10 years.”
Although Western Greyhound has had a number of difficulties in recent months, mainly as a result of two arson attacks, it was for many years an award winning company winning national awards for high quality year after year.
Mark Howarth added, “The Company still continues in discussions with interested parties for the rest of the business and an announcement will be made in due course.”
The current services will remain and fares and times will continue unchanged from Monday. Plymouth CityBus will continue to honour all Western Greyhound weekly and season tickets until their expiry and both CityBus and Greyhound wish to make this change as easy and seamless as possible.

Following on with this news from the West Briton publication A bus and coach industry entrepreneur has announced his purchase of troubled Western Greyhound, saving 133 jobs in the process.
Michael Bishop confirmed this week that he has purchased the entire share capital of Western Greyhound from previous managing director Mark Howarth, his wife Mari and Robin Orbell.
The company which currently carries 2.7m passengers a year in Cornwall and Devon, will continue with 65 buses and 133 employees from its freehold Summercourt depot, together with a small leased outstation at Wadebridge.
Mr Bishop said: “I am so pleased that we were able to work with Mark and his team to purchase Western Greyhound.
“The company has a very exciting future ahead of it and will continue to be a well-respected local independent operator. We have identified areas of the business that would benefit from further development and investment to strengthen the commercial future of the company.”
Western Greyhound was publicly put up for sale a couple of months ago and Mr Bishop will be joined by Adam Smith as general manager, while Mr Howarth will carry on as a consultant to the business.
It encountered difficulties in recent years with massive cuts in concessionary fares reimbursement, a horrific arson attack destroying 35 buses at its Summercourt base, followed by a further fire destroying three buses in Liskeard, and flooding and bad weather during last winter which severely disputed services.
Mr Howarth said: “These have been very difficult times and we apologise for any passengers who have been let down. We now move on and know that many passengers continue to support us as the small local operator and I thank everyone for that.”
Financial terms for both deals have not been disclosed.
Read more: http://www.westbriton.co.uk/Jobs-saved-entrepreneur-strikes-deal-Western/story-25542863-detail/story.html#ixzz3LWECptT5 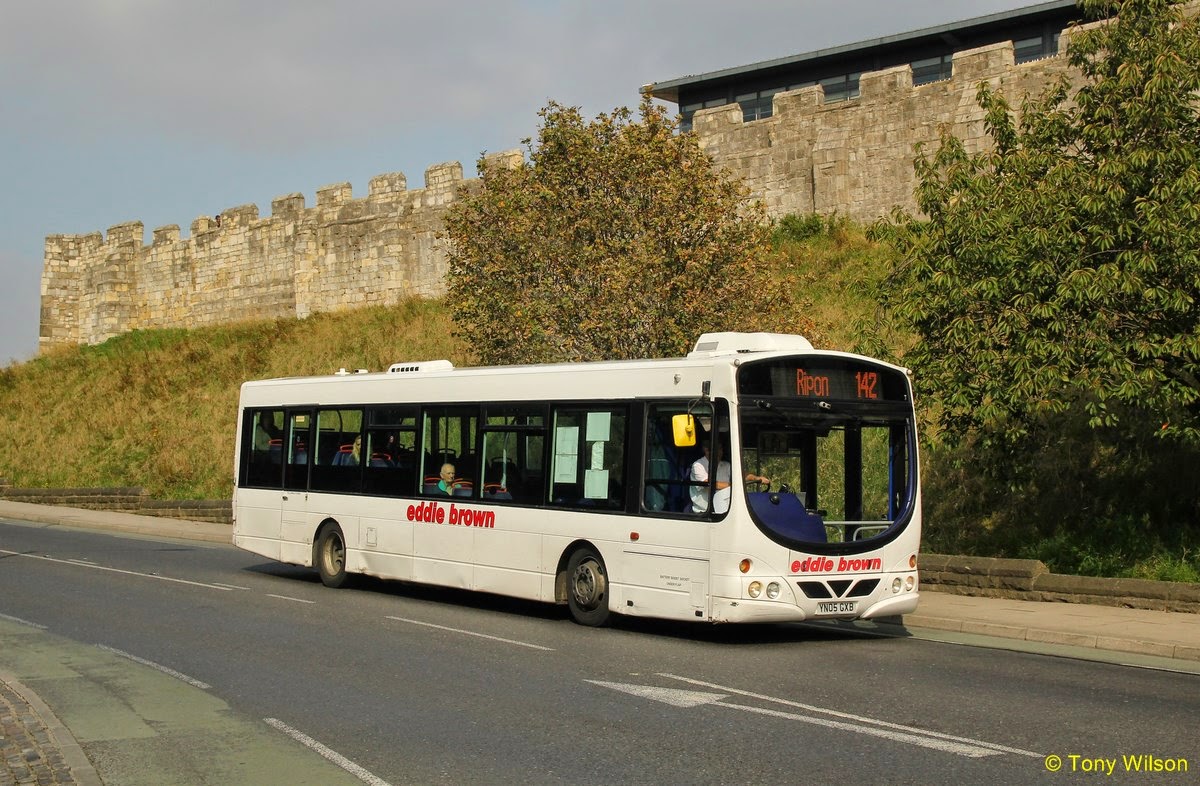 Late afternoon on 9th December, Eddie Brown Tours advised the Council that they would not be able to operate some contracted services with immediate effect. These included four school services which we were able to make alternative arrangements for, and the local bus services 56, 56A, 57, 57A, 58, 142 and 143. We have not yet managed to make alternative arrangements for these services. We expect to be able to cover the following school journeys from this afternoon, 10th December 2014.56A(R) -  Ripon School to Knaresborough and Harrogate57A(B)  - Boroughbridge School to Knaresborough and Harrogate57A - St Aidans and St John Fisher Schools to Knaresborough and Boroughbridge142 -  Boroughbridge School to Ripon
It is unlikely that we will be able to introduce the remainder of the local bus services until Thursday 11th December 2014.
Then an update on the 11th December


All school services are now properly covered until the end of term (19th December 2014).Service 142/143 will be operated to the existing timetable by Harrogate Coach Travel Monday – Saturday until 24th December 2014 by which time they will have arrangements in place for a more permanent replacement service.Service 56 57 58 will operate to its normal timetable tomorrow (11/12/2014) and Friday but won’t operate Saturday 13/12/2014. Journeys will be operated by Transdev, York Pullman and NYCC fleet. Journeys operated by NYCC fleet will be limited to 16 seats. From Monday 15/12/2014 they expect to have the normal timetable operating Monday – Saturday until 24th December.