It is one of the most beautiful and unspoiled parts of England, with rolling moorland, ruined castles and postcard-pretty villages. The Coquetdale valley in Northumberland national park has long had it all – except public transport.

All that changed last Autumn, when a local man fulfilled a life-long ambition to launch his own bus company to link up the villages of his valley, providing a “lifeline” to pensioners and teens without driving licences who were otherwise stuck in their homes.
Bus driver Steve Hurst, 29, set up Spirit Buses, having spotted a “gap that’s long needed filling”. Growing up in the market town of Rothbury it was impossible to go to the cinema in nearby Alnwick without getting a lift from his parents. Though just 12 miles away as the crow flies, the journey by bus took a whopping two-and-a-half hours, requiring a change at Morpeth in completely the wrong direction. Friends in the hamlets of Snitter, Alwinton and Harbottle weren’t even that lucky – no buses at all ran through their villages.
None of the big bus companies seemed interested in improving the services, Hurst, however, was undeterred by the perilous finances involved in rural transport. “It’s a public service,” he explained – albeit one which receives no public subsidies from Northumberland county council, unlike Arriva and other big firms which receive tens of thousands each year. “It was never going to make me millions. I just wanted to revive the valley and connect all these communities up again.”

With just £60,000 amassed from bank loans and personal savings, Spirit’s two buses made their maiden voyages in September. Now, there is a direct service between Rothbury and Alnwick, which takes just 20 minutes, the last bus timed so that customers can watch a play or a film without missing their ride home. Three days a week, a circular service connects Rothbury with Alwinton and all the villages in between on three well-spaced loops, recently voted one of the top ten most scenic bus routes in Britain by a coach magazine.
The services cover their costs, insists Hurst. And they don’t just carry passengers. “We’ve had cats, dogs, push-bikes, parcels, all sorts of things.” Recently a rural producer in Elsdon asked the driver to ferry boxes of marmalade to Rothbury shops. The buses are spotless but homely. Children delight in seeing the buses back at the depot each night, their destination boards changed to read: “Sorry I’m Off To Bed – Zzzzzzzz.”
Hurst’s customers love him. “This service has changed my life, I no longer feel trapped and isolated, it’s given me the freedom to be independent again to go shopping and visit friends and family who have had to move away due to lack of transport,” said one comment on Spirit’s Facebook page. Hurst must have received more Christmas presents than anyone else in Coquetdale.

Local councillor, Steven Bridgett, 27, said he would be encouraging Northumberland county council to consider Hurst when other subsidised routes come up for tender in the new year. But he conceded that the council is unlikely to be able to subsidise Spirit in the future. “To be completely blunt, it’s more a time of contraction than expansion,” he said.
According to the Campaign for Better Transport (CfBT), Northumberland county council has cut bus funding by 19% (£400,000) since 2011, reducing some services that connected towns. Martin Abrams, public transport campaigner for CfBT said: “Cuts in bus funding have left many communities cut off completely with massive long-term impacts. So it’s very welcome to see entrepreneurs stepping into the breach and providing a viable bus service. This isn’t an isolated case – there are other small operators taking the place of bigger companies – but they will need help from councils and the government if they are to survive long term. Underfunding of the pensioners’ free travel is a threat to these and other rural bus services. Towns like Rothbury are also typical of places where if you don’t have a car you can’t get around.
“Government must address this and invest in supporting these operators. After recently committing to spend £15bn on new roads, it’s obviously not a question of funding shortfalls, but a question of priorities.”
Bridgett has nothing but praise for Hurst: “I’m probably going to get in trouble for saying this but I’ll say it anyway: one of the things you tend to get with the bigger bus companies is that as they grow, they forget the little people. Steve provides a tailor-made, personal service. I don’t just salute his entrepreneurial spirit but also his social spirit. It’s not just a business venture for him, but a social service for the Coquetdale valley.” 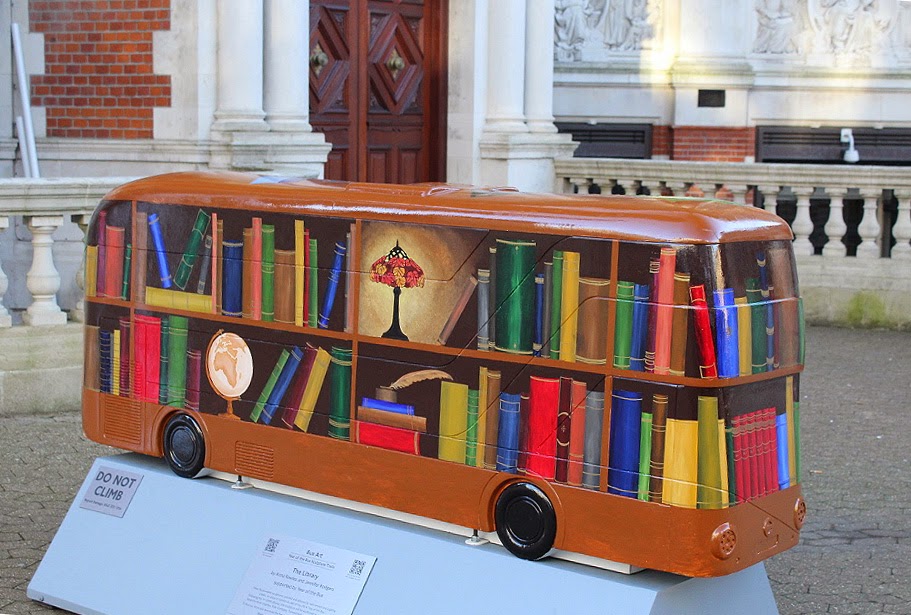 The final set of images of the London Bus Sculpture Trails has been placed in an album on the new Focus Flickr site. This time they are from the Croydon area of south London and have once more been provided courtesy of John Parkin. The album can now be viewed by clicking here