Frustrated commuters using London Bridge train station face up to 100 more changes to timetables in an effort to reduce continuing disruption.
Travellers have suffered weeks of problems since large-scale redevelopment work began earlier this year. Last month desperate commuters were seen jumping the barriers amid rush-hour “chaos”. The latest changes, in addition to 100 already made, will come into force on Sunday, May 17th and are contained in 18 pages of documents seen by the Evening Standard.
They include: Journeys taking up to seven minutes longer, with some trains leaving slightly earlier or later than before. Some trains not calling at all intermediate stations. Services with fewer or more carriages, and some cancelled altogether.
Anthony Smith, chief executive of national rail passenger watchdog Transport Focus, said: “It has been a torrid time for London Bridge passengers since Christmas with initial bad planning, patchy performance since then and now more change for some. Passengers will pray these final changes bring stability.” He added: “Passengers are paying the same for, in some cases, a much worse service. The issue of compensation for persistent delays under 30 minutes still needs to be addressed.” The changes, ordered by Southern Railway, affect services into London Bridge and Victoria. It is the latest attempt to improve services at London Bridge, where passengers have faced almost daily problems due to the Network Rail £6.5 billion  Thameslink rebuilding programme. This includes major track layout changes, with the number of lines drastically reduced.
The bulk of the work will not be finished until the middle of next year. A Southern spokesman said the new timetable was intended to “help improve performance across the Southern network”. A Network Rail spokesman said there was no capacity to run any extra trains “so we have to work with what we have to make the service run as efficiently and reliably as we can”. 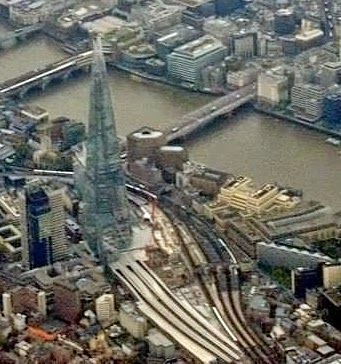 The rather interesting images of London Bridge Station have been kindly supplied by John Scragg. They show the scale of the station's gradual rebuild, from aircraft in which he has flown on commercial airlines from London. Notable features visible are The Shard built adjacent to the station in the lower image, with Tower Bridge and HMS Belfast in the upper.