A chance view from the top deck of a bus entering the bus station during March 2015, illustrates the three Park-&-Ride routes currently operated by Konectbus. Whilst the pink Wrightbus bodied VDL Bus and the blue ADL Enviro400 double-deckers were bought from new, the Mercedes-Benz Citaro G was acquired second-hand from sister company London General.

Go-Ahead subsidiary Konectbus has won the five-year contract to operate all six Park & Ride services in Norwich, starting in September this year.  The package includes the management of the six Park & Ride sites and Norwich bus station, offering the opportunity to improve the overall offer to customers. Konectbus will deliver a new network of services designed by the company and Norfolk County Council.

Eighteen new ADL Enviro400s will be acquired to operate the services, supplemented by three refurbished buses - two Mercedes-Benz artics and one of the current Enviro400s. The vehicles will include more comfortable seats with headrests, free onboard WiFi, multi-media screens with next stop announcements, promotional messages about the city and about the Park & Ride. They will also feature CCTV and telematics.
Changes to the services include an improved 10-minute frequency for Airport-Thickthorn during peak times, and other routes will have improved frequency during the life of the contract. There will also be a new Norwich Rail Station link from Postwick, providing alternative parking for railway passengers and people who work near the station. This route will also serve Broadland Business Park and County Hall and connect to the Bus Station. Plusbus rail and bus tickets will be accepted.  There will also be a dedicated service to University of East Anglia, Norwich and Norfolk University Hospital and Norwich Research Park with longer hours of operations during term time.  Smart ticketing on all services is also due to be introduced, with a revised and simplified fare structure, including the acceptance of Norwich cityZone tickets.  Another welcome addition for the public will be the reopening of the sites' rest room facilities.

Whilst Konectbus currently operate routes 601, 602 with double-deckers and 604 generally with saloons or bendibuses, NORSE the bus and coach arm of Norfolk County Council run routes 603, 605 and 606 using a liveried assortment of ex.London General Dennis Tridents circa 2003.
In other local Norwich news..............

Also due this year for Konectbus are five new ADL Enviro400s for route 8, which links Toftwood with Norwich, via Dereham.  Gavin Hunter, Managing Director of Konectbus said of the contract win: "As a locally-based company we are very pleased to have been selected to run all of the park and ride services in Norwich.  We believe that the improved network with more destinations and the new buses we have invested in will offer an affordable and viable alternative to the car. As well as taking the hassle of finding a parking space in the city centre away, our services will offer other benefits such as free to use WiFi and comfortable seating. 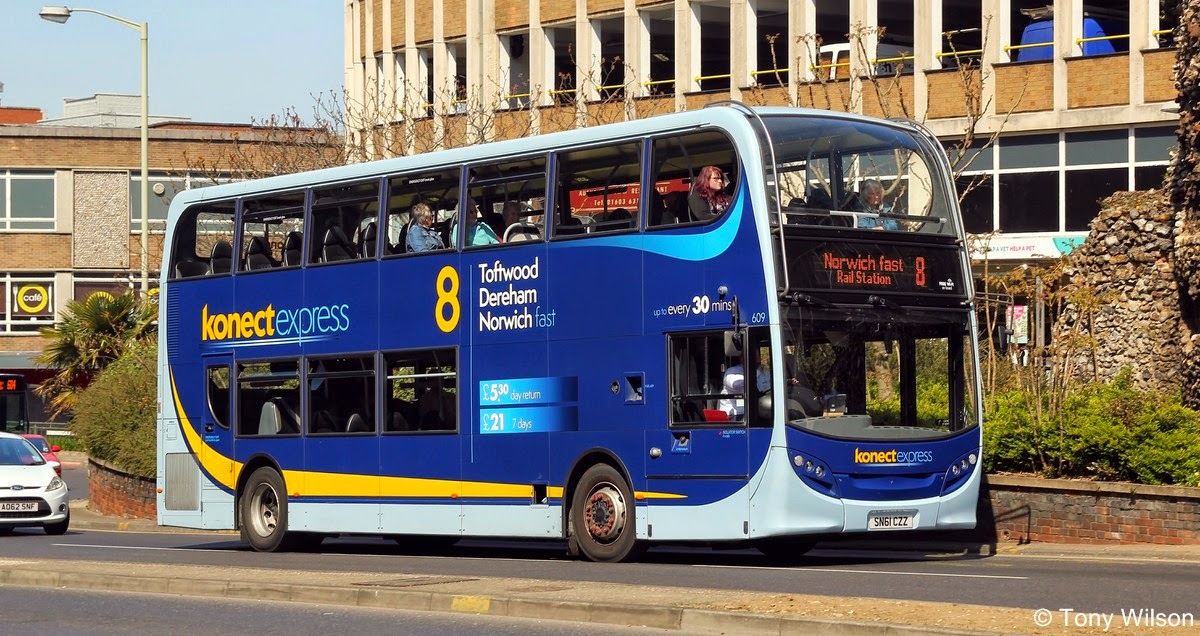 The current vehicles on the 8 route are smart looking, high specification ADL Enviro400 acquired in 2010, so plenty of life left in them to be cascaded onto another route. Number 609 approaches the city centre terminus at the bus station during April. With new buses expected later in the year, they may well find themselves on an equally interesting route, as they breeze in and out from a different side of the city. We shall have to see.