A bus has been named after the Great Escaper Bernard Jordan in a touching tribute to the D-Day veteran who captured the nation's hearts last year.
The former navy officer hit the headlines when he absconded from his carers, caught a ferry to Caen and turned up in Normandy to attend the 70th anniversary D-Day events.
On his return, Mr Jordan was made an honorary alderman of Brighton and Hove and on his 90th birthday he was inundated with 2,500 cards from wellwishers around the world.
Now in a final tribute, Brighton and Hove's World War One Heritage Bus has been named in his honour.

Mayor Brian Fitch, his wife Norah, and Martin Harris, managing director of Brighton and Hove Buses, revealed the newly named bus with a ceremony- but it did not all go to plan.
As the city mayor went to pull back the sticky tape covering the white block letters, the piece of string he was using snapped.
After a momentary pause in the proceedings, a ladder was fetched and the grand unveiling was completed.

Mr Jordan died aged 90 on December 30 last year and a week later his widow Irene passed away.
He was a 19-year-old Royal Navy lieutenant when on June 6, 1944, he was on a tank-landing craft in the first wave of boats to hit the Normandy beaches.
He had already taken part in the Battle of the Atlantic - the cat-and-mouse conflict between Allied ships and German U-boats over the vital supply routes from Europe to the United States.
At one stage he was part of the boarding party that captured one of the Enigma coding machines, used by the Nazis to scramble messages, from an enemy submarine.

After the war, Mr Jordan entered local politics and served as a town councillor for 23 years in his hometown of Hove, East Sussex.
He was a a city councillor for two years and was mayor of the town from 1995 to 1996.
Mr Jordan sparked a police search when he sneaked out of the Pines nursing home in Hove in June last year before the 70th anniversary D-Day celebrations.
Without telling anyone, the plucky pensioner caught a ferry to Caen in Normandy and made his own way to the service wearing his war medals and grey mac.

A month after his escapade in France, Mr Jordan was made an honorary alderman of Brighton and Hove during a reception at Brighton Town Hall.
The honour, which saw him join a select band of more than 30 men and women since 1997, was to mark his 'exceptional contribution to the work of the newly-formed Brighton and Hove Council and the former Hove Borough Council and to the community'.
More than 150 mourners turned out to pay their respects to Mr Jordan at a joint funeral service for him and Irene held in Brighton on January 30.
His medals, sold after his death, comprising the 1939-1945 Star, the Atlantic Star with French and German clasp, the Italy Star, the Defence Medal and the War Medal, raised £1,650 for the RNLI (Royal National Lifeboat Institution).
He and his wife, who married in 1946, had no immediate family and left £600,000 to the RNLI in their will. 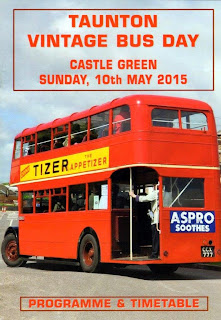 Contributor Jeff Lloyd has provided yet another fine set of images, this time from the Taunton Vintage Bus Day event held during May. An album has been created and can be viewed by clicking here