The government says it will delay or cut back a number of modernisation projects planned for Network Rail.
Transport Secretary Patrick McLoughlin says rising costs and missed targets make the £38.5bn plan untenable.
He blamed Network Rail, saying it should have foreseen the improvements would cost more and take longer.
Labour said it had warned the government needed to change how the railways were run but had "dithered" over taking action.
Network Rail said the plan, which was launched last year as the "largest modernisation of the railways since Victorian times", was too ambitious.
Network Rail controls 2,500 stations as well as tracks, tunnels and level crossings.
The key routes affected are:
Mr McLoughlin said electrification work would be "paused" on the Midland main line and on the Trans-Pennine route between Leeds and Manchester.
But he said that "electrification of the Great Western line is a top priority and I want Network Rail to concentrate its efforts on getting that right". 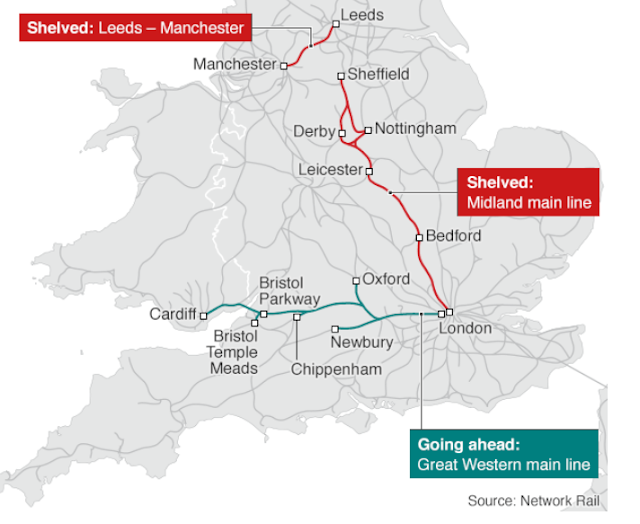 He also announced Network Rail's chairman, Richard Parry-Jones, would leave the
group after his three-year term and told MPs none of the executive directors would get a bonus for the past year.
Mr Parry-Jones will be replaced by Sir Peter Hendy, the current commissioner of Transport for London.

The announcement comes as the latest rail passenger satisfaction survey is released.
Travellers in London and south-east England are the least happy with their service, according to Transport Focus (formerly Passenger Focus).
The proportion of passengers satisfied has fallen from 82% last year to 80% this year.
Satisfaction on First Hull Trains was highest at 96%, while Southern was the lowest at 72%.
Michael Roberts, director general of the Rail Delivery Group which represents train operators and Network Rail, said: "Too often many passengers are not getting the service they deserve, and for this we are sorry.

The chief executive of Network Rail, Mark Carne, told the BBC the challenges of delivering myriad improvement projects while still running a railway seven days a week were simply overwhelming.
"Over the last year, it has become obvious that the challenges of operating, maintaining and enhancing the railway are significant," he said.
"I think it's time to level with the public and say that some of these extraordinary projects that we absolutely need are going to take longer and are going to cost more than we originally thought.
"We are going to take the summer to re-evaluate the extension of the programme - we need to do that properly with the Department for Transport and, of course, looking at the impact on trains as well."
He said it would not be possible to estimate the impact of the delays on the final cost.