You can now board a train in London and a few hours later get off by the Mediterranean - the new direct service between St Pancras and Marseille is the furthest passengers have ever been able to go on a train from Britain without getting off. 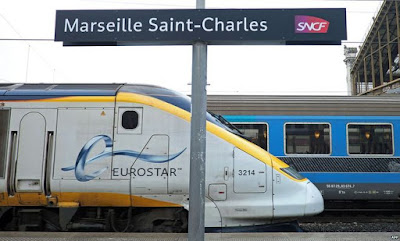 But why, more than 20 years after the Channel Tunnel opened, have direct services to the rest of Europe been so slow arriving?
Realising you've missed any train is unwelcome but missing the 15:22 from Marseille Saint-Charles to London Saint Pancras would be bad news indeed. The next departure would be at least 24 hours away.
Before breakfast-time five days a week a Eurostar train sets off from London and arrives six and a half hours later in Marseille. Less than an hour after that it pulls out again, heading back from Provence to St Pancras. At 1,237 kilometres (769 miles) it's the longest rail journey you can make from London to mainland Europe without a change.
It's only one service a day but Mary Walsh of Eurostar says for the company it's a big moment. "Probably we've all forgotten how amazing it seemed in the 1990s getting a train from Waterloo to Paris. If there weren't so many Brits in love with the South of France it could never work commercially."
In fact, a few days ago, getting the train to the UK, only a few passengers boarded at Marseille. But the Eurostar filled up nicely at Avignon and Lyon where it stops as it heads north. 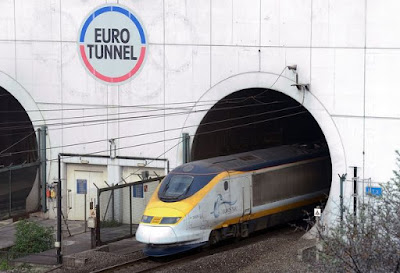 Eurostar has had summer-only services to Avignon before and there's a winter service to Bourg Saint-Maurice in the French Alps for skiers. But the new year-round service to Marseille finally delivers one of the big direct destinations which in the 1990s were talked of but which have been slow to arrive.
Mark Smith runs the website seat61.com, loved by rail obsessives everywhere. He says there are three big factors which mean rail travel through the Channel Tunnel for most people still means only going to Paris or Brussels.
"In a way the most straightforward problem to explain is the technology. You can't run any old train through the tunnel - currently only the Eurostar trains themselves comply with safety regulations.
"In addition you need to have all the signalling systems on board for every country you pass through - and no two major countries use exactly the same system. Eurostars are already crammed with the equipment for the UK, for France and for Belgium and there's physically no room for anything else. But now Eurostar is buying new trains, which will have the ability to go as far as Amsterdam as they're compatible with Dutch signalling and safety.
"The original Eurostar trains are now pretty old. At the moment they don't even have passenger wifi, which is a problem in itself," says Smith.
Amsterdam has long seemed the obvious next destination for direct trains from the UK. Eurostar says those services will finally arrive in 2017, with stops at Antwerp and Rotterdam.
"Eurostar is a commercial company and if we add to our network we have to be sure we can make it pay," says Walsh. "We think Amsterdam will work brilliantly for us because it's both a big business destination and hugely popular with tourists. But the list of places which meet both those requirements is shorter than you think."
Walsh says one factor which may have changed since Eurostar began is how long passengers will sit on a train.
"After 9/11 air travel started to become far more time-consuming - for reasons of security which no one would ever criticise. People used to say no-one wanted to be on a train for more than three hours but I think four would now be more accurate.
"That's talking about business travel. If people are travelling for leisure - and if we can make their journey definitely part of the holiday - then probably six or seven hours is acceptable to the right destination."
Smith says identifying new destinations is a hard-nosed business. "Remember that the start of Eurostar pretty much coincided with the launch of budget airlines in Europe. That did for some of the more ambitious plans and competition with air is the second big consideration hindering expansion.
"As a rail enthusiast I would love to see trains to Berlin or Milan or even Moscow. But realistically that is many years away."
Deutsche Bahn is known to be worried about what Smith gives as the third big problem complicating expansion of services through the tunnel.
"There's an obvious difficulty caused by Britain not being part of the EU Schengen treaty and retaining passport controls," he says. "It creates a massive headache for trains back to the UK which of course doesn't apply outbound. There's now a workaround at Lille and we'll see what passengers make of it all."
It was clear when I travelled back from Marseille that many passengers hadn't realised they would be required to leave the train at the northern city of Lille for passport checks.
Only Lille, Paris and Brussels have "juxtaposed" border control facilities which process UK-bound passengers before they board for London. Passengers from the South of France - and presumably new destinations to come - will need to get off at Lille, go up to the customs hall and in effect start their journey again.
An extra 75 minutes is factored in for the process.
Even some of those who knew of the Lille stop were surprised to find they had to carry their luggage throughout. Numerous small children were noisily displeased.
Deutsche Bahn may wonder what high-paying business travellers from Cologne and Frankfurt will make of being forced from their nice comfortable ICE trains. Some in the industry have urged a shift to on-train passport checks but for now this appears unlikely.
At Eurostar, Walsh does not deny there is a problem.
"The current arrangement is not ideal and we recognise that. The delay is offset to an extent by being able to turn up in Marseille or wherever and just get on your train, so you save half an hour there.
"But ultimately it was a choice of introducing the new service or not. People want more direct destinations and if there are problems at Lille we will look at how to make the set-up work better. In a couple of years when we introduce services to and from Amsterdam we'll have learnt from the experience."
Smith says the success of new Amsterdam services could be crucial to the future of international rail travel from Britain.
"We're looking at a journey time of three hours 55 minutes - within what most people now find tolerable. If the new services do take a big part of the market from the airlines - and I think they will - the industry will look for other places to conquer.
"Sadly some very attractive destinations are in the wrong place. How wonderful if you could get from London to Barcelona in under four hours on a train. Unfortunately geography is in the way." 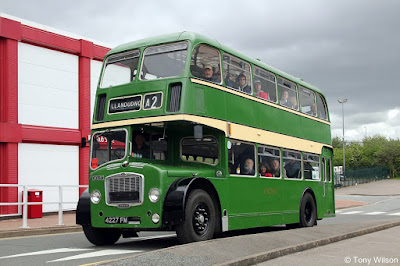 The next album in the series from the POPS bus rally features buses and coaches from Northern Ireland, Scotland and Wales and can now be viewed by clicking here