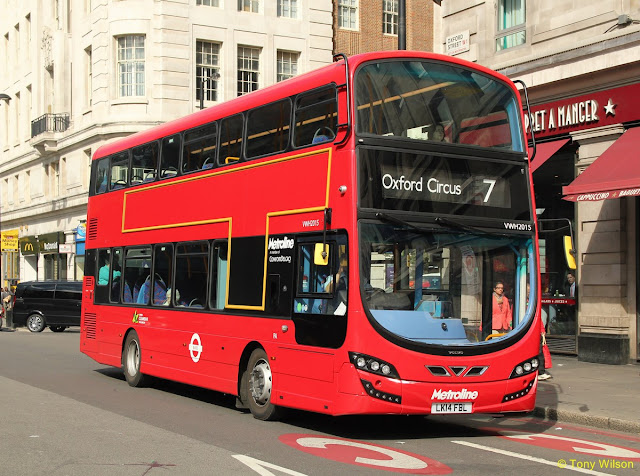 London transport bosses are considering an Oxford Street bus ban for the first time to help clean up the air on Britain’s most polluted road. Transport Commissioner Sir Peter Hendy said the arrival of Crossrail in 2018 was a “game-changer” for the West End that allowed him to consider the previously unthinkable. He told the Standard: ”For years we’ve been accused of being dog in the manger about buses on Oxford Street, now we are in a completely different place.”
“We are looking at all the options and we will countenance taking all the buses out. We wouldn’t rule anything out.” The dramatic U-turn in thinking follows years of pressure from store and tourism chiefs infuriated by the slow moving “wall of red metal” that clogs Europe’s busiest shopping street. His comments came as a high powered alliance of local authorities,
Transport for London, businesses, public bodies and the police called the West End Partnership launched their vision for the country’s most powerful local economy for the next 15 years with the challenge of improving air quality at the heart of its strategy. Currently around 270 buses an hour travel down Oxford Street, contributing to the world’s highest recorded concentrations of the harmful gas nitrogen dioxide (NO2). But the arrival of Crossrail will usher in a ten trains an hour service calling at Bond Street and Tottenham Court Road that is expected to substantially cut bus travel into the West End from areas such as Paddington and Farringdon, which are served by new stations.
Sir Peter said as a result the numbers of buses could be heavily reduced and the route changed to avoid Oxford Street altogether using parallel “back streets” such as Wigmore Street. He said the services “won’t disappear, there are quarter of a million people who go by bus every day to work and we’ve got to find some way for them to travel. “If you work at John Lewis and live in Willesden you don’t want to be leaving the bus at Marble Arch. But you might be happy if we take you close but not right there. ”It’s not like it’s without issues because there are the people living on Wigmore Street to take into account. But we’re prepared to look at that because there is now a bold plan for the West End. “It’s is the first time we’ve been prepared to contemplate it, we’ve not had the context in which to do it before.  It’s all part of a feeling that it’s time to do something big and we ought as a transport authority to do our part.”
Other options being looked at include making Oxford Street one way for buses to speed up journey times and increasing the number of places for pedestrians to cross the road. Sir Peter described the start of Crossrail services as “a huge challenge and a huge opportunity” with passengers flows between Bond Street and Tottenham Court increasing 75 per cent from 177,000 to 306,000 over the 12 hours of the working day. If the West End authorities did not respond to make it a pleasant place, shoppers would simply abandon it for alternatives such as the two Westfield shopping malls, he warned.
Sir Peter, who sits on the board of Partnership, said its creation allowed Transport for London to make radical decisions about the future of the bus network because all major decision makers were working together, including Tory dominated Westminster and Labour controlled Camden councils. Today’s reports from the Partnership detail a £40 million programme to improve Oxford Street  “to create the best shopping experience on the planet”, with more pedestrianisation and small ‘oasis spaces’ for shoppers, visitors and workers.
Other measures to improve the West End’s air include the introduction of the Ultra Low Emissions Zone in 2020 and new rules making all new taxis to be “zero emissions capable” by 2018. Mayor of London, Boris Johnson said: “It is clear that transformational change would deliver huge benefits for the West End. Crossrail is a key part of making that happen and this plan takes us another big step forward. "I look forward to continuing our work with the West End Partnership to ensure that improvements to urban realm and transport can enhance the vibrancy of the West End as this report clearly sets out.”
The West End Partnership, chaired by Westminster council leader Philippa Roe, emerged from the 2013 report of the West End Commission, which in turn was set up in the wake of the row about the proposed introduction of parking charges in the evening and at weekends. The plan - dubbed a “tax on nightlife” - was abandoned after a campaign led by the Evening Standard.