A total of 169 passengers were on the first United Airlines flight as it left Newcastle Airport for the Big Apple at 9.10am on Saturday 23rd May.A total of 169 people boarded the first-ever United Airlines flight from Newcastle to Newark Liberty International Airport on Saturday. The plane departed at 9.10am and was due to arrive in New York at midday. 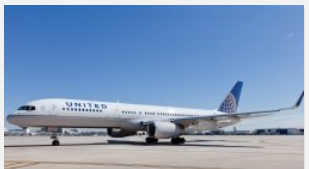 A celebration was held at the airport to launch the inaugural flight. A barbershop quartet entertained passengers as they checked in before a cake was cut to mark the occasion.

Bob Schumacher, United Airlines’ managing director of sales, said the company had been looking to launch the new route for several years and now felt the time was right as the country’s economy picks up.

He added: “We are delighted to offer the people of the North East convenient nonstop flights to the United States for the first time. This new service connects Newcastle not only with New York City but also with hundreds of other destinations throughout the Americas via United’s Newark Liberty hub, giving our customers a huge range of travel options.”
Iain Malcolm, South Tyneside Council leader and chairman of the Newcastle Airport board, said: “This is a historic occasion. It’s an important economic milestone for the region and will help to attract investment and encourage tourism from North America.

The flight, UA159, departs Newcastle daily, except on Wednesdays and Thursdays.

Newcastle Airport has been named the Top UK Airport by travel magazine, beating out dozens of other contenders.

Over 30 airports were nominated in the UK category, but a satisfaction rating of 86% saw Newcastle Airport claim top spot for the first time.

The airport is celebrating its 80th Anniversary in July with the launch of a new video.