The Himalayan tea train that's running out of steam 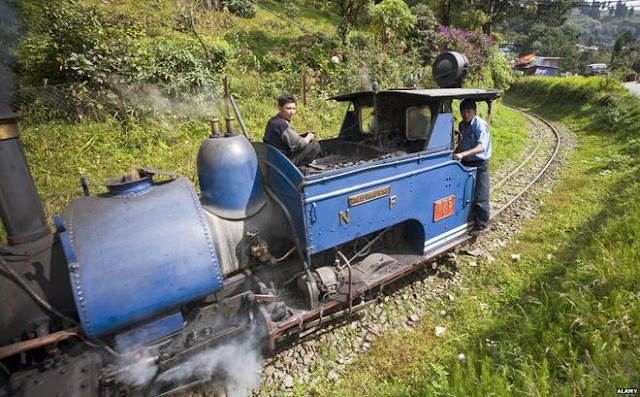 From the BBC Magazine

The Darjeeling Himalayan Railway once took precious tea from the foothills of the mountains to the teapots of the world. But it's become a victim of the colossal inefficiency of the state-run system and is facing a slow extinction through neglect, says David Baillie.
When a man who grows tea that sells for more than $2,000 (£1,300) a kilogram offered me a breakfast cuppa, I expected the golden rules of warming the pot and using boiling water.
But even though Rajah Banerjee owns the exclusive Makaibari tea estate near Darjeeling, golden rules are not for him.
"Good tea is like good wine and needs oxygen to breathe," he insists. "Boiling suffocates the flavour." So Banerjee lets the water stand in a pot without a lid for several minutes before he eventually spoons in the tea.
My cup is filled several times from the lidless teapot as he expands on his personal philosophy of tea and life, an eclectic mix of Hinduism, Rudolf Steiner, and the Slow Food movement of distant Tuscany.
But Banerjee's latest passion is the decaying Darjeeling Himalayan Railway - a narrow-gauge relic of the Raj that once took Makaibari tea from the Himalayan foothills to the Bengal Plains, from where it was shipped to the mainly lidded teapots of the world.
Built in 1879, the 48 mile (88km) line is now a loss-making anachronism that clings to life through the threads of its history and an aversion to the political bother of closure.

Looked down on by portraits of the four generations of his family who have nurtured the Makaibari estate, Banerjee is defiant. "Without investment it will die. But with investment it can strengthen tourism, and the whole community will benefit." Jabbing the table with his finger he adds, "And I can make that investment." Then the passion deflates. "But the government will not let me."
Banerjee's view is shared by many who know the region. There are a couple of token tourist steam services optimistically called the Joy Trains. The most popular shuttles back and forth along the five mile (7km) litter-strewn urban sprawl between Darjeeling and neighbouring Ghum.
The tatty cramped carriages have smoked plastic windows which have become so scratched as to be almost opaque. You can open them by sliding them back, but this merely adds your layer of scratched plastic to the already diminished view of a fellow passenger behind.
The steam locomotives thankfully have more charm than their carriages, but are now more than 100 years old and in need of expert and tender care rather than the desperate emergency repairs I witnessed involving the use of crowbars and sledge hammers.


An erratic diesel service, ironically with more tourist friendly windows, continues on a further 16 miles (26km) to the town of Kurseong but only one train a day makes the journey down to the plains and the connection to the main line.
This section had been closed for several years until March this year. The official reason was because of a landslide but everyone from the chief engineer to station masters gave me their own additional theories.
Even the security guard who frisked me as I left from nearby Bogdogra Airport had an explanation. He insisted, somewhat too cheerily, that it was because of the suicide of a fare-dodging passenger. Since the fare for the whole 48 miles is less than 48 pence and hardly worth dodging, let alone dying for, this seemed a little improbable.
The reality is that it is the railway that is committing suicide from a lack of investment. In the engineering workshop, ancient lathes and machine tools lie idle or broken as the skills to use them are lost with retiring workers, few of whom are replaced. 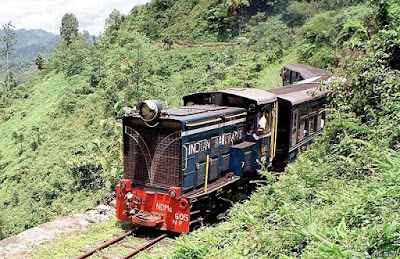 The most active engineering I witnessed was an earnest young man building a detailed model of one of the locos out of a sheet of tin.
So why is the Government Railway Board in distant Delhi so reluctant to hand the loss-making line to the likes of Rajah Banerjee, who would aim to offer tourists a ride along the whole 7,000ft (2,000m) climb into the mountains with hopefully a reasonable window to look out of?
Almost everyone I spoke to believed that the answer is the political cost of privatising even the tiniest outpost of India's monolithic state-owned railway. More than a million people work for Indian Railways and their unions fiercely oppose any privatisation.
It's a fight no-one has the stomach for, preferring instead eventual closure by the attrition of old age and retirement, of both people and locomotives. 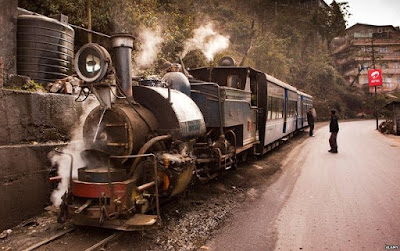 Back between Darjeeling and Ghum, tourist taxis wait impatiently as the Joy Train crosses the road they share, almost willing on the day when the railway will be gone, and with it Rajah Banerjee's dream of a world-class tourist train with new dining cars and reopened station buffets, presumably with lidless teapots.