ON the evening of Friday, August 7, Paul Jones was among thousands of commuters who faced long delays getting home on the trains after a power failure brought services to a halt.
On August 14, he went to meet managing director of First Great Western, Mark Hopwood, to talk about such delays - and the next stop for the rail industry...

"Someone got hold of my mobile number and rang me late at night and early in the morning. That wasn't great."
On the evening of Friday, August 7, Mark Hopwood was probably the most reviled man in the south west.
For Mr Hopwood is the managing director of train operator First Great Western (FGW), which had seen a power failure between Reading and London Paddington bring about the cancellation of a raft of services, leaving thousands of commuters facing long delays getting home for the weekend.
I was among commuters that night, getting a train home two hours after I was due to, putting the key into my front door at around 10pm - long after my six-month-old daughter had gone to bed.
This was not the first time I had faced delays when using First Great Western, as anyone who follows me on Twitter (@PogalJoners) would be aware of, so I was keen to meet Mr Hopwood when he agreed to my interview request.

However, I discovered the ire of commuters like me is something the man in charge of Swindon's trains is used to - and prepared to face.
"It doesn't particularly bother me," he says. "If people have paid a lot of money, they expect a good service.
"But because I know we are doing so much I feel quite comfortable about fronting up in the debate and saying 'look, we're doing this, this and this'.
"The reality is, we are addressing most of the things people are concerned about, it's just whether it is happening fast enough."
Mark Hopwood is a man of the railways and seems almost unaware of the size of his own job - managing a billion-pound rail company which moves millions of people every year.
"It's a big job, but you get used to it," he says when I ask about the weight he must feel on his shoulders.
His passion for the industry cannot be denied.
As a child, he was not allowed access to his grandfather's house until he recalled the stations he passed through on his journey, and he memorised the signal numbers on the route from his Thames Valley home to Reading station ("they have changed them now, so I don't know them anymore").
He started working on the railways in 1989 and rose through the ranks, becoming managing director of First Great Western in December 2008.
Now, with a family of his own, he doesn't impose the same memory tests on his own children, saying he would support them working in the industry, but not pressure them to do so.
He does have a Twitter account ("I don't really use it") but says many of his most ardent abusers have refused to meet him face to face to discuss their complaints - which he does understand.
"Reliability and punctuality isn't where we want it to be," says Mr Hopwood, who commutes by train himself from his home in Didcot to Swindon or Paddington.
"It has got slightly better, by about one per cent, but that's not the type of improvement we want to achieve."
He pointed to the recruitment of more drivers and train managers, as well as the doubling of the line between Swindon and Kemble, as reasons for hope among commuters.
"If you look at why trains are late, look at the causes and break it down, it centres on two things; infrastructure, which Network Rail maintains, and reliability, which we control," he says.
"When you look at disruption, most of it comes down to the reliability of the infrastructure between Swindon and Paddington.
"We have had a number of problems in the sections between Reading and London Paddington.
"The particular problem is the infrastructure between Swindon and London.
"From Didcot to Reading, the reliability has been pretty challenging and for Swindon, that makes a big difference.
"Last Friday (August 7), there was a catastrophic loss of the power supply, with power supply issues between the provider and Network Rail's supply.
"Those type of events, they don't mean people are a little bit late, they mean trains are not travelling."
He added: "The answer is that there have been some improvements but they are not of the scale we would have wanted to see."
Projects such as the electrification and the Crossrail scheme (which will boost capacity and cut journey times in London) will also improve the experience for Swindon people travelling to the capital, he says.
And he nods acceptingly as I explain that many of us can't see any changes - our trains aren't any earlier, or more comfortable, and we still see delays - even though we are told of investment and improvements.
"There is a lot going on," he says. "And the investment that is committed - and it is committed - is going to make a big difference.
"We are asking customers to bear with us through some challenging times while that's done. But we are trying to give people improvements now."
For Swindon, where First Great Western has its headquarters and employs around 250 people, the outlook is good, he says, as links are boosted between the south west and London.
"People in this area are going to see more investment probably than any other part of the country, in terms of more capacity," Mr Hopwood says. 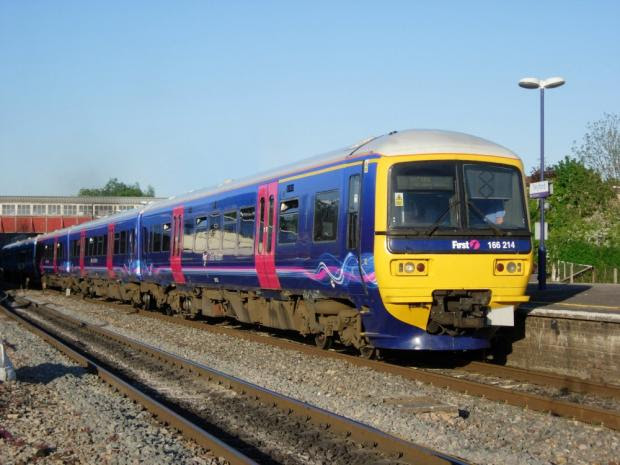 He also says things are set to improve after the completion of the electrification of the western mainline, with the new Hitachi electric trains increasing capacity when they reach our stations some time between late 2017 and early 2018 - although he admits things may be delayed after a government report into Network Rail's working timetable.
"What you will see is more seats, journey time improvements and for a number of routes, frequency improvements," he says, clearly excited by the changes.
"A lot of the problem with railway improvement is that it takes a long time and I think that is a challenge.
"We're seeing more people travel. We're growing as a business, growing a lot faster than the economy is growing.
"Didcot and Swindon have seen a growth in house building, with people commuting into London.
"People want to see improvements and want to see them quickly, but these are the timescales involved when you are building and re-building a network."
And later this year, people will no longer use First Great Western trains, but instead board new-look trains operated by the Great Western Railway (GWR), the new name for FGW.
"We thought with all this investment, now was a good time to think about what we mean, as a business, to our customers.
"Having the trains is interesting to some people, and how we run the service we provide and how we present that to our customers.
"Originally, GWR was built by a guy called Brunel, who was ahead of his time.
"Brunel proved that he was right and we want to show people we are taking forward Brunel's legacy today.
"The whole point of the new GWR, we have dropped name First. Essentially, we are giving the railway back to people." But what of the future?
When talking of possibilities, Mr Hopwood doesn't see it as impossible to return to a railway featuring halts, offering more localised journeys.
"The traffic in Didcot, which you wouldn't think is bad, can see a journey taking 30 minutes that we could do in six or seven minutes," he says.
"So, in the future, why not? But it would mean a lot of work, as main lines don't mix well with local lines."
However, talk of renationalising the railways has been rife in recent years, with the subject becoming a major talking point in the election of a new Labour leader, for example.
But unsurprisingly, the possibility doesn't phase the man at the top, who shrugs with that ever-present calmness.
"There was talk about it at the last election, talk about it at the election before that, but it never happened," he said.
"At the end of the day, I guess the politicians will decide how they want to run the industry.
"We believe we have put a lot in but we will have to deal with whatever the government of the day decides to do.
"The railways were initially built by private companies, but there is no doubt we are providing a public service and the government controls the service very tightly.
"There is a very strong public input into the railways, but we are delivering it through a private company.
"If you go back to BR days, which some people tell us are better ... there has been an increase in trains."
But back to August 7...
What would Mr Hopwood's message be to those commuters stuck on the cold platforms enduring delays like those of that evening?
"I think I would like to talk about the investment in the future," he said.
"We have been listening to what people have been saying and there is a lot of investment coming that will make your journey a better journey in the future.
Share article
"It's not happening as quickly as we would like, but it is happening, and people will see the benefits of that fairly soon."