'D Train' Takes to the Rails

The project to convert ex London Underground D Stock carriages to diesel powered rail cars is on schedule. All key deadlines have been met resulting in the appearance of a prototype driving car which is being shown to interested parties. 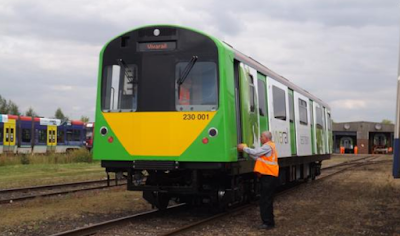 The train has been completely stripped: the bogies have been overhauled; new engine modules fitted, a fuel tank and electronic power controller have been fitted; all the wiring removed; and an entirely new cab fabricated. According to the D Train website "Seats, floors and doors still need plenty of work but everything is on schedule".


Barry Moore, Campaign for Better Transport visited the Long Marston site where the D Train is being prepared and made the following comment.
“I was privileged to visit the D-Train project at Long Marston yesterday.  The project was impressive at a number of levels, such as in the way innovative thinking was being applied to the interior layouts and not least of making further use of rolling stock which probably would have gone to the scrapyard. The ‘pausing’ of some of the electrification programme will delay cascading of dmu stock and the D-Train/cl 230 will help to meet the needs of overcrowded local lines.” 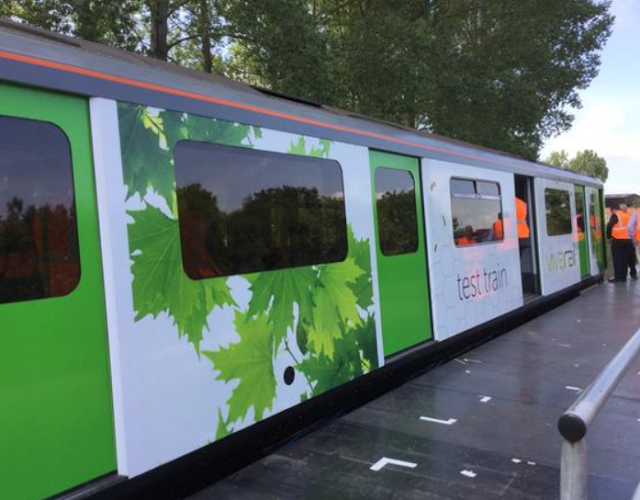 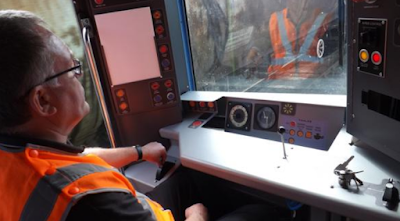 “Having a chance to see inside the working cab was invaluable, and we were able to put forward a few ideas to tweak the design. Overall we were thoroughly impressed with the work Vivarail has done to make the driving space comfortable and safe.  We reviewed the crash test video and both felt that not only was it a valid test but that the results were pretty reassuring, no-one wants to be in a crash but the D-Train’s structure held true and we thought a driver would be able to walk away unharmed, something the Vivarail team told us was paramount in their work on the train.”

The bodyshells are made from corrosion-free aluminium, and are being re-engineered to give additional collision protection. The “flexible frame” bogies – which are specifically designed for lower-quality track – are barely 10 years’ old.
The existing electric motors – which are amongst the most reliable on the Underground – are powered by new underfloor-mounted low-emission diesel engines, equipped with the latest automotive “stop-start” technology. Modern electronics will replace the existing heavy and maintenance-hungry electro-mechanical control equipment. A high power to weight ratio and purpose-designed control characteristics combine to give a high rate of acceleration, making D-trains ideal for routes with frequent station stops.


D-trains can be supplied as 2-, 3- or 4-car units. They will be fitted with all the signalling interface systems needed for operation on Network Rail, and will have all relevant approvals and certification in place.