Is this football’s strangest stadium? Train line runs through the ground of a Slovakian amateur team

There are a number of things that could potentially distract football players during matches - but a train hurtling its way past a pitch during a game has got to be perhaps the most unusual - and distracting - of them all.
However, that is the reality for Slovakian amateur team TJ Tatran Čierny Balog, who play their games next to a railway track that regularly has trains making its way past the ground - even during matches.
A video uploaded onto social media by a fan attending a game involving the Slovakian team shows just how focused players must be as a steam train travels along the length of the pitch during a match while spectators sitting in stands just in front of the track watch on.
Aside from the fact that a train goes right past the ground, the noise made by the engine coupled with the steam emitted from the train prove to be the ultimate distraction for players - although supporters certainly seem to enjoy the show with many taking pictures and indeed videos of the unusual scene.
Watch a clip of TJ Tatran Čierny Balog's stadium playing host to a train during a game by clicking  here

This clip featured recently on an edition of the satirical BBC television news programme 'Have I Got News For You'.

And on the subject of television programmes Michael Portillo is on his foreign railway travels again with 'Great Continental Railway Journeys' BBC2 at 9.00pm, whilst 'Chris Tarrant : Extreme Railway Journeys' is aired on Channel 5 at 9.00pm on Thursdays. Any editions missed can be viewed on the respective catch-up services.

NOW VIEW THE LATEST ON THE NEW FOCUS FLICKR SITE: 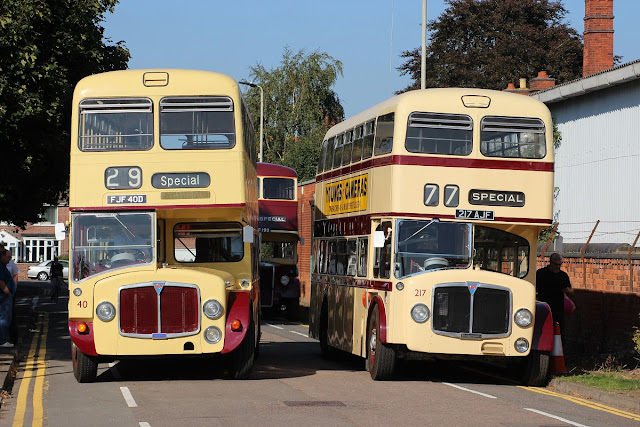 The Leicester Transport Heritage Trust held their annual event during September at the Abbey Pumping Station adjacent to the Space Centre. There was also an open day held at the First Leicester bus depot nearby and Roger Kaye has supplied a small selection bus images old and new which can now be viewed in an album by clicking  here