Train buffs call for a fellow enthusiast to buy £425,000 house so they can run their steam train through its garden

A heritage railway trust is urging their fellow enthusiasts to buy a £425,000 house so they can run a steam train through its back garden every hour.
The Lynton and Barnstaple Railway http://www.lynton-rail.co.uk/ want to buy the 260 yards of disused line so they can extend the service they currently run in Devon, but to do so they would have to purchase the four-bedroom house the original trackbed runs past in the village of Parracombe. 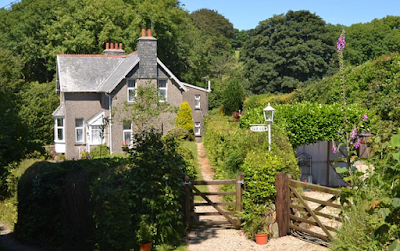 With funds tight, the group has issued an appeal for a train buff to purchase the Edwardian home and allow new tracks to be laid along the old route that was closed down in 1935.
The new owner would then have the joy of watching a steam train chug through their garden once an hour every day, as well as a stop right on their doorstep.


If all goes to plan, the mile-long heritage railway will be extended to five miles from Woody Bay, near Lynton, to Blackmoor Gate, near Barnstaple, via the property in Parracombe.
'The trackbed is still there, it is very close to the house, and we would like to buy it off the new owner of the property outright and reopen the line there,' said Tony Nicholson, of the Lynton and Barnstaple Railway.

'Obviously for this to happen the new owner will need to be a rail enthusiast but they will be rewarded with the wonderful spectacle of a full-size narrow-gauge garden railway passing by once an hour in the high season.
'I'm sure it would make the value of the property go up as there are not many places you can buy with a garden railway.
'The station of Parracombe Halt would only be 100 yards away from the house.'
The 2ft wide narrow gauge railway was built in 1898 to take people in north east Devon to Barnstaple and the house, which is called Fairview, was built in 1911 for the newly-married village postman, Fred Antell, whose father Edwin had helped construct the railway.

The Lynton and Barnstaple Railway reopened in 2004 and now attracts 46,000 tourists a year.
As well as the trackbed, the grounds of Fairview contain 41 different varieties of rhododendron. The elevated property also enjoys fine views over Exmoor.
But a spokesman for estate agents John Smale and Co, warned potential buyers against selling the land so the train line could be installed.
'If you took away a section of the land it would devalue the property by about £100,000,' he said
'It would also be harder sell in the future if there was a steam railway going through the garden.'